Why half of Irish mothers work during maternity leave

Opinion: Employers can’t punish women for being pregnant. We manage that ourselves 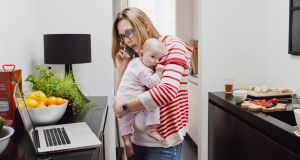 24% of women on maternity leave check their email. One in four does so daily. Photograph: Getty

Half of women continue to do some work-related activities during their maternity leave, a new survey claims.

The research was carried out by iReach and Nestle SMA, and included the responses of 996 women who were either pregnant and currently on maternity leave, or who had a baby in the last 12 months. Though too small to be a solid representative sample, the results of the survey are revealing.

Twenty four per cent of women on maternity leave check their email, including one in four who check it daily. Almost one in three take calls from work; 14 per cent of them do so weekly. And more than one in ten goes into the office to work – one in three say they go in “a number of times”.

Legally, there’s nothing wrong with this, if both parties are okay with it. The general rule is that if an employee works for her employer during her maternity leave, the maternity leave ends.

However, the law does allow for “reasonable contact” between the employee and the employer. What amounts to “reasonable” is open to interpretation – for example, employers should keep employees up to date with promotion opportunities or major organisational changes.

So why are a significant proportion of women taking such a generous view of their employer’s right to their own time with their newborn child – especially when, as other recent studies have revealed, Ireland has one of the worst records in Europe for offering “decently paid” maternity leave (defined as two-thirds or more of pre-maternity leave earnings)?

This survey doesn’t say, but I have a theory. My theory is not that these women are so in love with their jobs, their employees or their colleagues that they simply can’t stay away. And it’s clearly not the case that they’re so generously compensated, they don’t mind putting in the extra hours.

But I don’t necessarily believe that employers are ruthlessly taking advantage, and making unreasonable, or borderline illegal, demands of their employees either.

Instead, I suspect this is a reflection of the anxiety and guilt women still feel about taking maternity leave. In the SMA study, 46 per cent of women said they felt “nervous”, “anxious” or “concerned” telling their employers about their pregnancy. Unfortunately, that anxiety is often well placed.

No matter what the legislation says, many women internalise the message, from the very earliest stage in their career, that maternity leave is an inconvenience to their employer, rather than a fundamental right.

I recall the moment early in my own career, long before I became a mother myself, when I realised that all I’d read during the sociology modules of my undergraduate degree about gender equality in the workplace would mean nothing in practice.

I was at a women’s networking event where a business owner stood up and admitted that her “heart sank” whenever a colleague announced her pregnancy. The other women got to their feet and applauded her bravery in “saying the unsayable”. I remember wishing it had remained unsayable, and unsaid.

It’s no wonder so many women end up opting out of the workforce when they are constantly reminded that their desire to have a family is, at best, a headache for their employers and colleagues – and at worst, a sign of their lack of commitment.

Since then, I have heard a lot far more “unsayable” things spoken aloud to, and about, pregnant women in the workplace. I have heard male bosses “joke” about their employees’ nine-month “eternity leave”, while a friend had an employer ask her if she was “very unlucky or very stupid” when she announced her second pregnancy in as many years.

Critics of Donald Trump recently reminded the world of his declaration in 2004 that maternity leave was “an inconvenience for a business’’; much more recently, the defeated candidate for the French presidency, Francois Fillon, sneered that a leading journalist was unsure of her brief because she had been on maternity leave.

Rightly or wrongly, Irish women are still getting the message that maternity leave is a burden on employers – and that the possibility that they might one day get pregnant may be holding them back in their careers.

A recent study by PWC found that women in Ireland believed “concerns over the cost and impact of maternity leave” were the top barrier to women getting hired.

That’s not the only “motherhood penalty” women face. Earlier this month, French researchers found that mothers get paid about 3 per cent less per child than their childfree female counterparts.

But there’s also an invisible motherhood penalty, the one mothers inflict on themselves. Your employer might not be legally allowed to punish you for being pregnant, but the message that you are lacking in commitment is so deeply internalised, you often end up punishing yourself: checking your email and taking calls on maternity leave, and – when you return to work – working twice as hard as you did before to prove you’re not slacking.

Until employers stop treating maternity leave as a burden and an inconvenience that’s not likely to change. No woman wants to sacrifice the effort and commitment they have put into building a career simply because they have, or may one day, become a parent – especially when no man is ever expected to.