‘When they told me I was infertile, I was consumed by shame’ 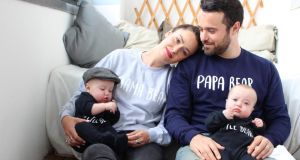 Family time on the balcony. Olivia with Max and James with Mathilda.

It was November 19th, 2016, and my newborn twins, just three days old, lay in the neonatal intensive care unit. They shouldn’t have been born yet, it was 10 weeks before a full-term, 40-week pregnancy should end. Mathilda was doing well, but Max’s lung had collapsed and he had just had an operation. I held his hand, cried, and said to myself something needed to change.

It was at that dark moment that I decided to write a blog about what we had been through. It started with an infertility diagnosis, then three horrific IVF treatments and finally premature babies.

My name is James Doherty, my blog is scantilydad.com and this is my story. Born and bred in Dublin, Ireland, like many of my generation, I was driven away by the economic turmoil in the late 2000s. By way of Vancouver, Canada, I ended up in my favourite city in Europe, Berlin. My wife, Olivia, is a true Berliner and we decided that Berlin would be our home when we returned to Europe.

When I was told that I was infertile, feelings of shame, embarrassment and inadequacy began to consume my life. What made it even worse was that I suffered in silence. Men, especially Irish men, are probably the world’s worst for talking about emotions. I’m as guilty as anybody for bottling up my feelings.

For some reason being infertile is taboo. Not enough men talk openly about health issues and that needs to change. We all know people that are affected by depression, addiction and infertility, but people keep it to themselves.

I was one of them, and it was even after three IVF treatments I still found it hard to open up. Recently I was interviewed on TV3 and saying that I was infertile in such a public domain gave me a knot in my stomach.

Olivia and I went through three IVF treatments. The first and second blur into one horrible year of hormones, injections and fighting. In hindsight, the clinic we chose was the wrong clinic. We did not feel comfortable there; we felt just like another number. Pretty much everything that could go wrong went wrong. They gave us the wrong hormones, they overstimulated my wife’s ovulation and, on occasion. the doctors were even rude. All the signs were there that we were in the wrong place to have the family that we so desperately wanted.

The treatment started with a course of hormones called progesterone. It is administered intravenously to stimulate ovulation. This was one of the hardest parts of the IVF treatment as Olivia has a major fear of needles. Each injection induced such fear that it could take up to 30 minutes to finish the job. It always ended in tears. The tears pale in comparison to the side-effects from the hormones. The mood swings and fights almost caused a divorce.

We went through the horrible process twice in the same clinic. Inevitably, the results were the same. Olivia had been overstimulated and had produced too many eggs. On both occasions we should have seen this as a sign that we were at the wrong clinic. Our desire to have a family meant that we decided, under the advice of the doctors, to continue the treatment.

Male infertility is broad-ranging. I have an adequate sperm count, which means I can still produce sperm. The issue is with the motility(movement) and morphology (shape) of my sperm. So, it was my sperm that was used.

For the first two tries, the process and outcome were almost identical: they took my sperm sample and fertilised Olivia’s eggs in the lab. Five days later we came back for the embryo transfer. On both occasions we fertilised about 10 eggs. On the fifth day only two had survived. None of our embryos had advanced far enough to survive inside the womb.

I have written on my blog about the importance of finding both the right clinic and the right doctor. We had a bad feeling about the clinic and multitude of doctors we encountered, yet we stayed there. If you are going through IVF and do not feel comfortable, don’t do what we did – change clinic.

For the two first IVF treatments, we waited did not have the guts to go back to the clinic for a pregnancy test. Instead, we waited to see if Olivia got her period. The arrival of her period on both occasions marked the failure of the treatment. Failed IVF treatment is the saddest and most depressing thing that I have experienced. There is so much hope, dreaming and longing that is crushed by a failed treatment.

When the treatment failed, I felt guilty. My infertility had caused all of this. Olivia’s dreams were being crushed because of my inadequacy. Infertility and failed IVF treatment led us both into a depression, with Olivia suffering more than I did.

11: Worked hard on our relationship

While suffering through the heartache of failed IVF treatment, I knew that life was teaching me valuable lessons. It is during the hardest times that you learn the most about yourself. Every day, when I was feeling low, I would repeat the words of Oscar Wilde: “Everything is going to be fine in the end. If it’s not fine it’s not the end.”

The moment we started the third treatment I went into focus mode. This time we were going to be successful. I committed 100 per cent to doing everything in my power to have my own family.

We went into the third treatment with a renewed optimism that had been missing for several years. We changed clinic and doctor and from the start we knew we were in good hands. Dr Annette Siemann, from the Westend Fertility Clinic in Berlin, is a miracle-worker. She analysed the two failed treatments. She knew that progesterone was the wrong hormone to give Olivia and that was why she had been overstimulated.

For the third treatment we would now do what is called the long protocol. This meant administering a less harsh hormone nasally over a longer period. After digging a little deeper they discovered that Olivia had Hashimoto’s thyroiditis, a condition that affects the autoimmune system. This was not spotted by the first clinic.

Everything ran like clockwork and we ended up with two fully formed blastocyst embryos. On the day that we transferred the two embryos into Olivia’s womb, we hugged and held each other outside the fertility clinic. I told Olivia: “We have done everything in our power to make this work. It has brought us closer and our love is now stronger. This time it will work.”

Two weeks after the transfer came the time for a pregnancy test. That day will stay with me forever. Several years of heartache and pain had come down to this moment. She went into to the bathroom to do the test. For her, that 10-minute wait was the longest of her life. She went back into the bathroom and discovered two stripes on the test. She was finally pregnant and our journey was coming to a happy end.

She ran to the bedroom and hugged and kissed me and kept repeating: “ Oh my God, I’m pregnant, I can’t believe I’m pregnant.”

Finally, our dreams were starting to come true.

Follow James and Olivia’s story next week. You can read James blog at scantilydad.com