Ditch the beach body, and love your lumps and bumps 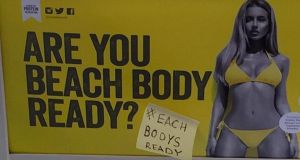 Is it even possible to have a healthy body image in a society that is obsessed with perfected images of idealised bodies?

When the sun is shining and a trip to the beach seems like a tempting way to spend a Saturday, it can be hard not to feel plagued by body-image issues.

This is exacerbated by controversial marketing strategies that tell people they need to get in shape in time for the good weather. But can these campaigns do more harm than good?

In a society where being thin is often portrayed as a prerequisite to happiness, it is perhaps no surprise that some people are developing unhealthy relationships with their bodies. In serious instances, body-image issues can develop into eating disorders or Body Dysmorphic Disorder (BDD).

Tracy O’Neill, a psychologist with Spectrum Therapy, believes we hold people to impossibly high standards, and says that the consequences can be severe.

“A lot of people would present first with anxiety, but when you peel back the layers, you’ll find that there is a dysmorphia there,” O’Neill says. “I would see people who might find that their anxiety about their appearance is socially crippling. It may hold them back from job interviews or from dating, for example. It might cause them to have a tendency towards social isolation.”

But where do these issues come from? The media is often held accountable for perpetuating impossible ideals for both women and men’s bodies. In 2015, one advert which depicted a woman wearing a yellow bikini with the tagline, “Are you beach body ready?” was banned in the UK. However, the responsibility is not just with mainstream media anymore.

“Peer groups are to blame, as well as social media and filtered photographs,” says O’Neill. “Everybody is just projecting ‘perfection’ images instead of the gritty realities of stretch marks, lumps and bumps. It’s pervasive everywhere: in the commercial world and media world.

“It’s amazing how an awful lot of people would equate their body with happiness,” she continues. “The images that people see get stuck in their heads, and while they might know that they’re not realistic, they get embedded in their psyche. If I had my way, I’d keep people off social media entirely, because it’s an imbalanced view.”

Dr Sean O’Connell, who runs a private practice counselling service on Harrington Street, Dublin, says that in some cases, body image issues can develop into BDD.

“Societally, there is an attitude that says, ‘it’s now June, you have to have the perfect beach body’. But that’s an unrealistic standard when you think about the amount of energy and time that is involved in creating a healthy body. We’re not talking about a perfect body, because that’s leading into something unrealistic.

“A healthy person is within their BMI, they’re somewhat content with their body, and they aren’t standing in front of the mirror for hours trying to fix themselves.”

O’Connell believes it is essential that we foster a society where people are kinder to themselves and reflect upon the way they treat themselves.

“You see a lot of comments around self-esteem in the research, and in my mind, that’s kind of an old buzzword. The new thing coming in is how you can be kinder and more compassionate to yourself. Because once you start being okay and comfortable and nurturing with your own vulnerability, then you can boost your own confidence.

“But if you engage with the self-critic, it becomes a self-fulfilling prophecy. It wastes your energy and it undermines you. That’s when you see people getting really anxious about things like going to the beach. The function of going to the beach, for me and a lot of people, is you’re going out with family and friends, you’re going to have fun. For something to come in and take from that rots away at the meaning of this activity.”

He says we need to engage our critical thinking when we look at advertisements in order to improve our own relationships with our bodies.

“Think about the function of something. Obviously, it’s an advert, so they want more customers. But if it’s at detriment to something like mental health, I’d be having a think about what that means and the ethical responsibility of the company advertising that.”

Bodywhys, Ireland’s eating disorder association, works to encourage healthier attitudes towards our own bodies. Fiona Flynn works as Youth Development Officer and part of her work is to teach media literacy to young people so they can be aware of the realities of retouching and photoshopping.

“What came out of those conversations was that social media was the number one issue, and the media was number two. Young people today see more images of physical perfection in one day than their parents might have seen in their whole adolescent years, so that has an impact.

“We see the same thing over and over; it’s the very slim look for girls and the very muscular look for males. Both of those are unrealistic and unachievable for people who are following a balanced, healthy lifestyle. To achieve those ideals, we’re talking about extreme weight loss or fitness approaches. Those extremes can lead to unhealthy weight loss behaviours, which could contribute to the development of an eating disorder.

“The My World survey in 2013, which was carried out by Headstrong, found that body dissatisfaction was linked to higher levels of depression, alcohol and substance misuse, self-harm and suicide as well as eating disorders. It’s really important to consider the impact that these messages are having,” adds Flynn.

Is it even possible to have a healthy body image in a society that is obsessed with perfected images of idealised bodies?

Research suggests that we can learn to be happy with our bodies, but that we need to be more aware than ever of the role that social media and advertising play in fostering body image issues. Perhaps it’s time to ditch the beach body and learn to love our bodies instead.

As O’Neill says: “It’s essential that people seek out a balanced view, because you never see perfection on a beach. You might see it in magazines, but you rarely see it real life. People should try to have a healthy perspective on what’s normal and what’s not. But, of course, that can be an elusive goal.”