Total Immersion: learn how to swim faster (much faster)

Despite training sessions and three triathlons, I was still a slow swimmer so I signed up for a Total Immersion workshop 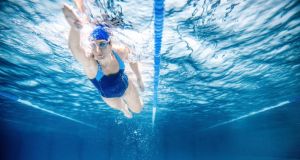 My aim this winter is to try to increase my speed by 10-20 per cent. Photograph: iStock

For many athletes, these quiet, dark months between Halloween and the end of the year are a time for rest and recovery. Training sessions lighten, and the only marathon on the schedule is likely to centre on the Christmas festivities.

The early winter also offers a time to reflect on achievements during the year, and to plan for future challenges in the year to come. It’s a good time to refine technique rather than aiming for peak performance.

In this spirit, I decided to use the time this year to try to improve my swimming. So far on my swimming journey, I have managed, in the space of a year or two, to go from being unable to swim a length without being out of breath, to churning out successive kilometres in the pool and in open water.

Over the summer, I completed three triathlons, ranging in length from a sprint distance to the Dublin half Ironman last August. The sense of personal achievement I derived from swimming almost 2km as part of the latter event, followed by long cycle and run, was immense.

Yet I remain an incredibly slow swimmer, and so my aim this winter is to try to increase my speed by 10-20 per cent. Intrinsic to this goal is my hope that moving through the water will cease to be a struggle, as it often feels, and become a smoother process.

But how to achieve this goal? Should I train hard and build up strength in the water, or focus on stroke and try to achieve greater fluency?

I have decided to follow both paths, and hope they are not too contradictory. The weekly squad sessions organised by my local T3 Triathlon Club are an incentive for longer swims than I would normally do on my own. They also include a variety of drills designed to build up arm and leg strength and improve stroke quality.

But as many swim learners will have noticed, extra effort is poorly rewarded in the water. The price of shaving a second or two off your 50m time is utter exhaustion. There has to be another way of swimming faster.

I decided therefore to try a Total Immersion workshop, which took place recently in Portlaoise. Anyone who has enlisted the internet in their quest to learn swimming will know that TI, developed in the US by veteran coach Terry Laughlin, is a huge presence in online swimming education.

Essentially, this method seeks to first deconstruct a person’s stroke and then re-assemble it in the smoothest, most efficient way. Many traditional swim instructors are unenthusiastic about TI, claiming it is inimical to fast swimming, but triathletes focused on distance more than speed often find it appealing.

The group at our workshop ranged in age from 12 to the mid-60s, and more than half were triathletes frustrated with their swimming. In a classroom environment, London-based TI coach Tracey Baumann explained TI was about building muscle memory and new neurological pathways for swimming. Effectively, we are trying to unlearn traditional teaching and to replace this with new messages to our brains that address the challenges of moving efficiently in water.

Water is 880 times denser than air, Tracey points out. Moving in it requires twice the effort, and meets eight times the resistance, faced on dry land. It follows that the greatest improvements can be achieved by minimising the resistance we offer to the water.

Traditional teaching emphasises kicking and “pulling” with the hands, high-intensity workouts and strengthening of the hands and legs. In contrast, TI prioritises balance, streamlining and propulsion, and movement of the entire body over individual limbs.

Dolphins, she tells us, are 80 per cent efficient in water, but humans reach only 3-9 per cent efficiency. And since the 9 per cent bit of the spectrum is represented by Michael Phelps, the rest of us are at the lower end. “That’s all we have to play with. You can’t defy the rules of physics. That’s why we have to maximise our efficiency.”

So much for the theory; we then head to the pool to put these principles into practice. Rather than swimming lengths, this involves a series of light drills: floating; floating with hands outstretched; “skating” in the water with one hand out, etc. The focus is on the process rather than outcomes, and on the correct timing of the many individual movements that make up a stroke.

There’s a lot to think about, but we’re encouraged by Tracey and Irish TI coach Melissa Duncan to focus on one area of improvement at a time – breathing, arm recovery, rotation, etc. By relaxing in the water rather than straining with effort, we should find our proper balance in the water and learn to streamline our bodies to offer the least resistance going forward.

Video analysis before and after shows most of us have made some progress towards a cleaner, more effortless stroke, but further practice will be needed to build on this achievement. Once again, I’m reminded that learning to swim is a journey not an event, or as Tracey told us: “If you’re ever bored in the pool, it’s because you’re not practising properly”.

Seán Moncrieff: Where am I from? I don’t know
8