Even tech companies admit there’s no function or tool that replaces a healthy, ongoing dialogue 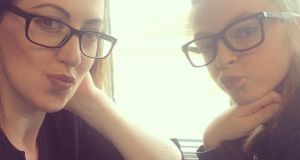 Rachel Schoene, administrator at the CoderDojo foundation, with her 10-year-old daughter Lexi

It’s safe to say that most children are on comfortable speaking terms with technology. In-app purchases, online chatting, videos, coding – there’s barely a part of the online experience that they don’t understand, at least technically.

Yet, couple this nous with a built-in childlike curiosity, and things can get complicated. It’s not unusual for parents to feel they are lagging behind their kids as technology gallops inexorably towards new frontiers.

Keenly aware that parents need a helping hand when to comes to navigating this new quagmire, the tech giants have launched a number of new family-friendly features.

Recently, the Google Family Link service was launched in Ireland, enabling parents to connect their smartphones to their child’s phones or tablets, to manage remotely what the child can see and do. Parents can also monitor screen-time by setting a “bed-time” for the device, and lock a device remotely. Location tracking is also available, as is a function that allows parents to prevent a child from downloading and using certain apps and websites. The cut-off point is 13 (the age at which it’s possible for youngsters to open their own Google account).

You wouldn’t buy a bicycle for a kid and then ride it, but you would buy them a helmet

“One of things that we are hearing from families is that it can be tricky to navigate what kids are doing,” says Elijah Lawal, communications manager at Google. “We didn’t want to perpetuate the notion that kids are better at tech. They get to play around more and get stuck in, and we wanted parents to have an experience whereby they can provide natural guidance. You wouldn’t buy a bicycle for a kid and then ride it, but you would buy them a helmet.”

Earlier this month, Facebook launched Messenger Kids in the US, a new version of its popular communications app with parental controls, to help safeguard pre-teens who may be using unauthorised and unsupervised social-media accounts. Facebook launched the service aimed at six-to-12-year-olds.

In Ireland, Julie de Bailliencourt, safety policy manager (Europe, Middle East, Africa) at Facebook, says that the organisation discourages children aged under 13 from having Facebook accounts – though it is relatively easy for someone of any age to set up a Facebook account.

“We launch new (features) on the safety side on an ongoing basis,” says de Bailliencourt. “We’ve also done a huge amount of work on how to support parents as a group, and now we have the Parents Portal, created with feedback in mind.”

Tech companies, such as Facebook and Google, say there’s no function or tool that replaces a healthy, ongoing dialogue.

“We like to leave (some) conversations to parents as it’s not a one-size-fits-all thing,” notes Lawal. “After all, what one parent might consider appropriate for their kids is different to another.”

Adds de Bailliencourt: “We don’t advocate one style (of conversation) over another, but we do say that parents don’t need to be experts on every platform. Ask your child about what they’re enjoying online, ask them about their favourite vloggers, or how a certain filter works. Have that chat with them, ‘how do you know this person is who they say they are?’ We try to suggest early engagement: identifying key moments, like when a child gets their first phone, is a good time to have a chat about things.”

Dublin-based Rachel Schoene is administrator at the CoderDojo foundation, which offers free computer programming clubs for young people. She noticed that her 10-year-old daughter Lexi had shown a natural proficiency for technology from an early age. This, she says, is no bad thing, and Rachel doesn’t necessarily see this as something she needs to control.

“I enrolled Lexi in a local Dojo when she was aged seven, following advice from her Granddad,” she recalls. “He spotted early on, when Lexi was two-three years old, that she had a keen interest in how things work, be it toys, computers or the remote for the telly. After a few weeks at the Dojo it was clear Lexi was loving it. Her skills in computing obviously improved, but more noticeably her self-confidence skyrocketed.”

Lexi has her own iPad, phone and laptop and can use whatever device is in the house.

“We have no parental controls,” says Rachel. “I find them infuriating when you’re trying to Google something, or do anything quickly and there’s a password or key, eyeball scan needed to do a quick search. Parental controls scream secrecy, something to do behind a parent’s back with her friends unsupervised and that scares me more than anything else. The closure of any dialogue when you introduce barriers and banned sites is scarier to me than whether or not the child has permission to access whatever it may be in the first place.”

“Obviously, I worry about her seeing unsuitable content and talking with strangers online,” says Rachel. “But I suppose my whole view on online safety is quite simple. I hang out where she hangs out online, I have all her passwords and logins and I check in on her profiles and private messages every now and again, I check the search history, see who she’s followed and who may have followed her, all that stuff.

“If I see anything unusual I might ask her about it but it’s non-confrontational and is always easily explained. Sometimes, I might see a bitchy exchange on a group chat between her friend group (they are all tween girls), so I’ll monitor it and make sure Lexi is mindful of her interactions. Her responses and most importantly make sure she is not being a bully or being bullied online.

“I suppose I find it difficult to understand why parents allow their children to hang out online for hours a day unsupervised, when they would not let their child or teen hang out unsupervised in public for that length of time. To me, the risks are quite similar.

“When it comes to unsuitable content, Lexi and I keep an open dialogue, the most she’s seen are some pictures of naked women, which are no different to the hyper-sexualised imagery we are all bombarded with when walking around in our everyday lives anyway. She was watching a pop singer, legs spread and depicted as a sexy human buffet on the TV the other day and singing along to that particular song with her friends, when I walked into the room I actually asked them all to go watch slime videos, and there’s no parental control for that.”

Of the idea that parents and children are on two separate technological speeds, Lawal says: “One thing I always say to parents when I speak to them about technology is that children aren’t endowed with technological knowledge in the womb. It’s not a natural pull for them. The reason they seem more tech savvy is because they get involved. I encourage parents to do the same thing. There’s nothing stopping parents being as tech savvy as their kids.”

De Baillliencourt echoes this sentiment: “Kids may be more adept at handling the technological side of things, but parents are street smart and have experience. Technology can be intimidating, but once you start using it and understanding how things work, it can be very empowering.”

“My advice? Ditch the outsmarting-each-other thing,” surmises Rachel. “It’s an unnecessary and exhausting exercise and in all honesty the child will probably win. Instead focus on “up-smarting” each other. Open the conversation about cool stuff online, and learn from each other.

“If you educate or up-smart yourself about ‘the big online’, you may find you enjoy learning of new apps or technologies to make life easier. You both may have a few laughs using Snapchat filters. Or you may just be able to communicate better all round, both with each other and when talking about technology.”