The secret to a long life? Eat less 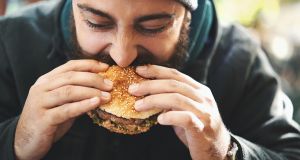 If you really have to have that burger, you could still get beneficial effects in your cells by exercising regularly. Photograph: iStock

That burger you’re eating?
Put it down.
Slowly.
No, it won’t kill you, but still, put it down.

That’s it. Good.
Now you might live a bit longer.

It seems strange, but new research appears to show that restricting our calorie intake might extend our lifespans. So is shutting your mouth the best path to a long life?

First of all, why do we age? Our cells work hard to keep us going and over time accumulate damage. This is a bit like emotional baggage in our love lives, except that the damage comes from inflammation and especially oxidative stress, mostly caused by chemical compounds known as reactive oxygen species.

“Reactive oxygen species got a bad press for a long time, they’ve always been thought of as the bad guys,” says Dr Brian McDonagh, lecturer in physiology at NUI Galway. “They are signalling molecules and are needed, but it’s about the balance: when they are chronically high is where we get problems.

“A landmark paper in 1956 showed that as we age, we increase our accumulation of reactive oxygen species and oxidative damage, which underlies the ageing process. That theory has since been refined, it is not as simple, but they are known to play a role.”

Where does all this oxidation come from? Turns out our need for oxygen to survive comes with a catch: byproducts of the oxygen we breathe can generate these species that in turn cause damage. Our cells, like our bodies, have specialised compartments where certain functions are carried out: these are called organelles and they are a bit like the organs in our bodies. Among these organelles, the ones that get a lot of damage from oxidation are the mitochondria.

“Mitochondria are the powerhouses of the cell [and] one of their major functions is to generate ATP, the currency of energy within the cells,” says Dr McDonagh. It’s clear that we need little generators to power our cells, but unlike normal batteries or power plants, these are not static.

“Mitochondria need to be broken down and they need to be rebuilt, and you get this continuous cycle of fusing with each other and breaking off from each other, degrading and generating more mitochondria. [If this process] is interfered with, you can get an accumulation of damaged mitochondria, which in turn can lead to an increase in the amount of reactive oxygen species generated, and that is a bad thing.

“We need to get rid of things that have accumulated over time, which might be damaged, and produce new ones,” says Dr McDonagh. Especially mitochondria, as research has shown that these little powerhouses are essential to cell ageing: experiments have proved that removal of damaged mitochondria actually rejuvenated cells.

So how do we get rid of our damaged mitochondria?

It sounds dramatic, but it does make sense: when we reduce our calorie intake, our body looks for alternative sources of energy, such as our own components, and basically eats itself. “When we are under caloric restriction, we are recycling proteins and organelles to generate energy,” says Dr McDonagh.

Caloric restriction then forces the cells to degrade their own components for fuel, and in the process removes damaged mitochondria and reduces oxidative stress, leading to a longer lifespan. This effect has been observed in bacteria, yeast, worms and fruit flies. In mice, diets involving periodic periods of fasting have been shown to increase lifespan up to 30 per cent. Not only that, they also protected mice against diabetes, cancer, heart disease and neurodegenerative diseases like Alzheimer’s and Parkinson’s.

“We know that in animals, such as rodents and monkeys, caloric restriction of up to 40-45 per cent does make a difference to the ageing process in almost all organ systems,” says Prof Rose Anne Kenny, Head of the Ageing Programme and The Irish Longitudinal Study on Ageing (TILDA) at Trinity College Dublin. “Extreme caloric restriction in humans is as yet, unresolved,” says Prof Kenny. “But certainly, low sugar and low carbohydrate diets are clinically relevant in certain diseases, such as type II diabetes and obesity.”

Dr McDonagh can see clear benefits in reducing our calorie intake: “Under chronic caloric restrictions you’re not going to be obese, you’re going to reduce chances of type II diabetes and arteriosclerosis,” he says, pointing out that those benefits might actually prolong life by themselves. But he also thinks that dieting alone may not be sufficient for a truly long lifespan: “I think you need a healthy lifestyle as well as caloric restriction.”

Indeed, scientists have found that regular aerobic exercise can cause changes in our body which are similar to those of fasting. So if you really have to have that burger, you could still get beneficial effects in your cells by exercising regularly. However, new research shows that delays in ageing and some age-related diseases occur when caloric restriction and exercise are performed together, so maybe the burger should be optional.

Many people fast for religious reasons, such as Muslims during Ramadan, but would it be feasible to try to restrict our calorie intake for the sake of a long life? If so, experts believe that it would be better to implement this approach at least in middle age, because we know that lifestyle changes such as exercise and healthy diet have a beneficial impact when begun around mid-life.

“We do know from TILDA that 70 per cent of people over 50 in Ireland are overweight, and 70 per cent are not achieving the minimum recommendation of physical activity per week. These are two very simple things that we could achieve as a society [to improve ageing],” says Prof Kenny.