My eight-year-old daughter’s violent tantrums are getting worse

When we correct her about something, she kicks, hits, punches and becomes extremely violent and verbally abusive 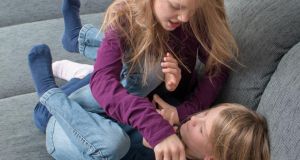 Question: I have two girls – one is nearly six, the other nearly eight. We are having problems with the eight-year-old’s behaviour and I am really hoping you can give me some advice.

Our issue is when we correct her about something. All hell breaks loose – she kicks, hits, punches (mostly me) and becomes extremely violent and verbally abusive. It is getting worse. We have tried the praising, calm approach, rewards chart etc, but nothing seems to work and it’s really upsetting everyone in the house.

We are at a loss as to how to break this cycle.

An example of what happened was over the weekend. The girls wanted to watch a DVD and I wanted them to have a bath so we agreed they would watch it after their bath in their pjs. I told them to go upstairs and start to change. I went up too almost straightaway and the eight-year-old had the six-year-old pushed on the bed and wouldn’t let her go. So I said in a calm voice, “that’s enough now”, but had to repeat it a few times. It was difficult to prise her off her sister.

When I eventually did, I gave the same instruction to change, but the eight-year-old proceeded to follow her sister to her room and kept at her, which is a common occurrence. I gave her a warning that if she touched her sister once more she would not be seeing the DVD.

She ignored my warning, so I told her she was not going to get to see the DVD. That is when all hell broke loose – kicking me, hitting, punching, throwing stuff on the ground. This would be a typical example of what happens.

It is causing a lot of distress for us all and we just don’t know how to break this negative cycle.

A good first step is to take a pause and to try and understand what might be at the bottom of your daughter’s behaviour. It strikes me that a lot of it could be to do with rivalry with or jealousy of her younger sister. The tantrum you describe started out as a dispute between the two of them, but after the tantrum ended up with your older daughter getting the blame and being punished. From her perspective, she is likely to perceive this as you siding with her sister and this can cause further resentment and disputes. The key to managing sibling rivalry is to get in early when there is a problem and to impartially help them resolve the dispute without taking a side. For example, this might mean addressing both of them before the tantrum gets out of hand – “Listen, let’s take a break now, let’s calm down and talk about what is happening”. Sibling rivalry does require careful handling to ensure it does not aggravate behaviour. I have written several other articles on the subject on irishtimes.com if you want to consult these.

Have a clear plan to manage a tantrum

Think through a step-by-step plan for how you will respond to any tantrum in a way that allows you to remain calm and which holds your daughter to account. Making rewards dependent on good behaviour is a good approach but make sure to address this to both the children – “There will be no DVD, until the two of you calm down”. Some children will need a bit of soothing, support and talking time to calm down and others will simply need some space – “Let’s take a break now for a few minutes and we can talk when things are calmer”.

If you do have to follow through with a consequence, the key is not to remove all the reward (as this can escalate a tantrum as the child feels they have ‘lost everything’) and instead keep something in reserve to encourage the child to behave – “You have lost 10 minutes of your DVD , but if you calm down now then you will be able to see the rest of it”. It is always important to have another option up your sleeve and to consider all the ‘what ifs’. For example, think through how you might respond if the tantrum escalates. How will you get through to the end in a calm way? For example, you might simply pull back and give your daughter space and then follow up with her later and insist she tidies up and takes responsibility for the mess or impose a later consequence for hitting out.

Take time to teach your daughter how to behave

Discipline by itself does not solve behaviour problems and you need to take time to teach your daughter how to behave better and to prevent problems happening in the first place. For example, consider when flashpoints for tantrums occur and consider how you can change family routines to avoid or manage these.

It is also important to sit down with your daughter and talk through what is happening and to problem-solve how things can be changed. Help her express her feelings about what is happening and explore with her how she can manage better – “What can you do differently when you feel yourself getting angry (instead of kicking or hitting)?” or “How can you resolve things with your sister in a better way?”

Attend to your relationship with your daughter

Behaviour problems tend to stress parent-child relationships, which leads to more resentment and conflict. Consider how you can build your relationship with your daughter. Ensure you have regular one-to-one play or chatting time with her during the day when you can enjoy her company. More than anything else, it is this connected time that will help you understand your daughter and which will give you the tools to sort out the problems.

The serious tantrums you are dealing are very stressful but they can be changed with a bit of patience and persistence. Many people benefit from attending an evidence-based parenting course to change things (such as the Parents Plus programmes, Incredible Years or Triple P) – which are delivered over eight-12 weeks to give you time to put the ideas into practice within a supportive group. These courses are delivered usually for free in primary care or family resource services throughout Ireland.