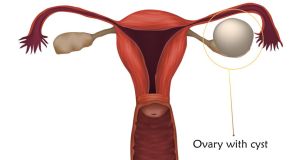 A woman has told of how an ovarian cyst weighing 26kg (4st or 57lb) was removed from her body after doctors insisted at first that she must be pregnant.

Keely Favell lost a third of her body weight after surgery to remove the growth. She had started to gain weight in 2014, but only went to see a doctor about it in 2016 after she blacked out in her office job.

Despite numerous inconclusive blood tests coming back, a GP decided that she was pregnant, Favell wrote in a blogpost describing her experience. “Looking at me, anyone would have assumed I was nine months pregnant, so naturally they referred me to my local hospital for a pregnancy ultrasound,” said the 28-year-old from Swansea.

This story has shaken me. Look at the SIZE of that cyst. Imagine. https://t.co/67ZCS2nwxk

The ultrasound led to an emergency CT scan which showed she had a large ovarian mass, prompting her referral to a high-risk obstetrics consultant who told her that surgery was a “must” and that four weeks later she would be “cut open from my chest bone all the way down to my pelvic bone; pretty much like an old-fashioned C-section”.

She wrote of undergoing four hours of surgery at Swansea’s Singleton hospital in March last year to a remove a cyst that she later nicknamed Mr Whippy. Favell said that she was home four days later, adding: “My recovery since has been plain sailing and although there have been a few hiccups along the way, some of which are still yet to be sorted, I am now of much better health than that of last year. Both physically and mentally.”

She told the BBC that the cyst had appeared to grow so slowly at first that that she did not believe anything was wrong. “I’ve been with my partner Jamie Gibbins for 10 years and we did wonder a few times if I was pregnant – but we did home tests and they always ruled it out,” she said.

It was “so embarrassing” explaining she was not pregnant, Favell said, that she had decided to go along with well-wishers who asked her about her future date of delivery. – Guardian