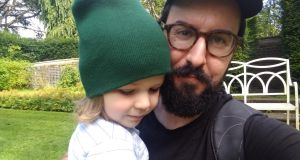 Darragh Geraghty with his son

Will we ever be able to truly comprehend the long-term effects this pandemic will have on our children? Will there even be long-term effects? Children are resilient, but this resilient? Only time will tell. Except that maybe it won’t.

If, many years down the line, our teenage kids go off the rails, could we say, “It’s not their fault; they lived through 2020.”

If they start selling acid out the back of a van at 16 could we say, “If only the lockdown restrictions all those years ago were a little less severe.”

If they tattoo their faces and become obsessed with pocket knives, would we be in our rights to say, “It’s our fault, really. When they were young we barely left the house for a year.”

We recently went for a walk in a nearby park (what else is there to do?) and as we passed by the playground both of our children naturally wanted to go in. Just a casual look at the playground would tell you there were too many people in there.

What I saw in that particular playground, on that particular day, reminded me of the scene in Zoolander where Derek’s friends gleefully splash each other with petrol before dying in a horrible, inevitable fiery explosion. It’s funny because nobody is that stupid. It would never happen!

And yet here I was, trying to explain to a four-year-old that we can’t go into a playground because there are too many people in there. There were as many people as you’d expect on a sweltering August afternoon. It was heaving. It beggared belief. Not to over-egg the point, but do you remember that simulation clip that was doing the rounds during the first lockdown? It showed about 200 dots bouncing randomly around a box as a visual representation of how quickly and exponentially a virus can spread throughout a community. This playground looked like some well-funded university programme decided to recreate the simulation in real life. Look how they cluster and congregate, just like the simulation! Look how the children ping around the enclosure from one group to the next, maximising the spread of the virus – just like the simulation!

So anyway, my son did what any four-year-old might do when presented with the double-whammy of not getting what they want, and their dad lamely explaining why – he got angry. But he said something he’s never said before; something that made me instantly think, oh no . . . this is the effect lockdown is having on his malleable little brain.

Now, that’s not an entirely unreasonable thing to think in any number of circumstances. Against my better judgment I think the same thing every time I open Twitter. But my son doesn’t hate people; in that moment he hated an abstract thing that was preventing him from playing with his sister in a playground. Two minutes later we had moved on, back to exploring the park and jumping in puddles.

The thought lingers, though.

We talk about children being resilient, but maybe resilient is the wrong word. They don’t know anything other than the world we show them. This, what we are all going through, is now normal for them. Is there anything unhealthy about a wariness of strangers? No, but to not hug your grandparents for a year?

Most people are cautious of change because it brings with it uncertainty. Moving house, changing jobs, having a baby, breaking up, getting a haircut; every decision that will bring about change, big or small, is tricky. Here the decision is taken out of our hands, but the change is monumental.

Our children are growing up in a world vastly different from the one we grew up in. The change is the worry. Will they be okay? Was the world we grew up in perfect? Did our parents worry about us? Did they fret about the ozone layer, Sellafield, recession, violent video games, mad cow disease, the threat of nuclear war? Did they wonder if all that anxiety would damage us in the long term?

Perhaps what we need is a change in perspective. How about this – our children will be absolutely fine. They will thrive, not in spite of this pandemic but because of it. All this extra time spent in close proximity with parents and siblings will foster more intimate, loving relationships in the long term. All these precautions like mask-wearing and the 2m rule will encourage a more empathetic treatment of others and a respectful appreciation of personal space.

On top of all that, we are raising a generation of children who will truly value the benefits of proper hand-washing.

Maybe 2021 will be the year of positivity, after all.