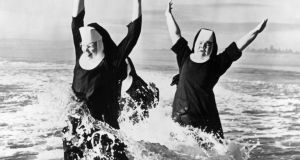 Small acts of kindness towards other people tends to boost the sense of well-being of the people doing the kind acts. Photograph: Getty Images

I have often admitted here that I’m a pessimist by nature, but even I have to agree that the health evidence in favour of taking a positive view of life is impressive.

The most recent hopeful sign I’ve seen comes in the form of a study of almost 1,000 people in the US who underwent various psychological tests at the age of 55 and then at 64.

The study, published in Psychological Science, found that the more people experienced positive emotions the less their memory was likely to have declined in the period.

That’s a good incentive to make space for positive feelings and experiences, especially in an ageing society in which more people find their memory isn’t working as well as it used to.

It is unclear why positive emotional experiences have this effect. Maybe people who have such experiences are more likely to do what they need to do to take care of themselves. Maybe they have better social networks which have long been known to protect against cognitive decline.

It doesn’t seem to matter if you also have negative experiences, so this is nothing to do with denying reality. It’s the number of positive experiences that counts.

A similar picture emerges from a study of biographical writings made by a group of Notre Dame nuns in the US in the 1930s. When social scientists analysed the 180 biographies they found that the more often positive emotion was expressed, the more likely the writer was to be alive 60 years later. The presence of negative emotions in these biographies did not seem to reduce the lifespan of the writers – it was the presence of positive emotions that made the difference.

As Prof Richard Davidson, author of The Emotional Life of Your Brain, put it this was “an important hint that it was the presence of positive emotions, not the absence of negative ones, that supported living to a ripe old age.” Professor Davidson specialises in the neuroscience of emotions and meditation.

What are some ways to generate positive emotions? Some people are born cheerful and good luck to them. Lots of us, though, need to work at it. But the work is fairly easy to do.

Here are some examples:

Cultivating gratitude boosts wellbeing and positivity. This could be a matter of doing a daily (or a few times a week) review of what you feel grateful for.

Small acts of kindness towards other people – stepping aside to let someone else pass by for instance – also tends to boost the sense of well-being of the people doing the kind acts.

Exercise boosts the emotions not only while you’re doing it but for a couple of hours afterwards. So those “puffers” who jog along the city streets and who, in these Covid days, I try to avoid, are getting to feel better and to live longer.

My personal favourite is what I call “positive version thinking”. This means that if I am caught up in negative thoughts about something I try to remember to check if it also has a positive aspect and to bring that into my awareness as well. I don’t have to get rid of the negative thought – what I’m doing is giving the positive thought its place in the sun also.

If somebody annoys me I can bring into the picture the fact that they also do things for me. When the bin lorries wake me up in the morning I can bring to mind the awareness that if the bin men were not getting up at some god-awful hour I would not be getting my rubbish taken away. I can do this without having to like being woken up by trundling bins – it’s a question of putting something positive and true alongside the annoyance.

So, to my fellow curmudgeons I say – you don’t have to give up your cherished gripes: you just have to increase the number of positive experiences you also have. Will that take work? Yes it will and feel free to gripe about that, so long as you do it.

– Padraig O’Morain (@PadraigOMorain) is accredited by the Irish Association for Counselling and Psychotherapy. His latest book is Daily Calm. His daily mindfulness reminder is free by email (pomorain@yahoo.com)