How to turn climate-change denial into acceptance and action 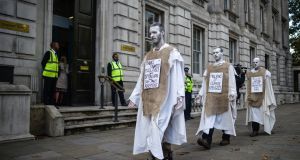 One of the biggest challenges in tackling the climate emergency has been the widespread denial of the cause and severity of the problems. Scientists and experts have known about these problems since the 1970s. As early as 1972, the Club of Rome panel of experts published the seminal Limits to Growth report, which named the problem of global warming and identified the unsustainable industrial model and the burning of fossils fuels as the causes.

However, rather than acting on these early warnings and changing course, governments did the reverse and accelerated the consumption of fossil fuels, moving us more rapidly towards catastrophe. We now know that, for decades, powerful vested interests such as the fossil fuel industry have deliberately ignored the findings of their own scientists and have pursued a course of sowing confusion and actively promoting denial.

Society at large has been complicit in sustaining this denial right up to the present day. Many branches of the media continue to host debates between scientists and irrational climate deniers as if the science is not settled, or they host lifestyle programmes about people recycling more as the solution to climate breakdown rather than describing the enormous society-wide transformation that is needed. In our democracies we continue to elect politicians who focus on increasing economic growth and wealth (for a few at the top) rather than those who tell us hard truths about the reality of our unsustainable economic model.

From a psychological perspective, denial is an understandable defence mechanism. The existential reality of climate breakdown is too disturbing and too scary to face, so we try to deny it and put it out of our mind. If we truly faced up to the implications of the climate emergency and what the future might be like, then we fear we will be overwhelmed by anxiety or even break down in despair. As a result, it can feel easier to maintain our denial and keep our heads stuck in the stand. While denial avoids pain and makes us feel better in the short term, it is a disastrous way of dealing with problems in the long term.

The many forms of denial

As the reality of climate breakdown becomes more apparent, denial continues in many different forms. Many people now no longer actively deny the reality of the climate change that surrounds them, but they might try to deny the science linking it to human actions. Others simply refuse to think about the climate-related crises they sense are coming. They put it out of their minds and just focus on their day-to-day lives. They become climate ignorers rather than climate deniers. Others engage in wishful thinking and false optimism such as telling themselves “things won’t be so bad” or “the government will sort things out” or put their faith in unproven geo-engineering projects in the future.

Others try to deny the reality of the climate crisis by undermining those who try to communicate honestly about it. In the recent Extinction Rebellion protests, sections of the media tried to ridicule the protesters as extremists or “tree huggers” or being ethically inconsistent (“Sure, they drive cars too”) instead of reporting the climate science and the alarm they are trying to raise. If they undermine the messenger, they don’t have to listen to the message. These personal attacks are just another form of denial and another attempt to distract from the gravity of the predicament we are all facing.

In responding to denial, it is important to realise it is not a rational response. As a result, denial is not simply overcome by reasoned argument. A person is in denial not just because they need to be educated about science or because they are missing a piece of information. They are usually in denial because of how they feel, and particularly because of what they are afraid of. That is why it can be helpful to respond to people’s emotions: “I understand it is scary to face the reality of the climate emergency” or “It can be painful to realise that our own lifestyles are responsible” or “It can feel overwhelming when you consider all the changes we have to make to respond to this crisis”. Helping people move from denial to acceptance and constructive action is as much about managing their emotions as about persuading them by reasoned argument.

“The only pain we can avoid in life is the pain caused by trying to avoid pain.”
RD Laing

So much psychological misery is caused by denying reality. In an effort to avoid the pain of change, an alcoholic can go to great lengths to deny that their addiction is destroying their lives. So we can also go to great lengths to deny that our consumerist lifestyles and our economic system is actually destroying future lives and the planet in which we live. The pain of taking responsibility and the fear of change is so great we will avoid it at all costs.

The antidote to denial is acceptance. Within acceptance and commitment therapy (ACT), the central premise is that it is not a difficult set of circumstances that causes a person’s misery, but rather their reaction to their circumstances. ACT invites people to accept and be present in whatever challenging reality they face and to avoid reacting negatively and making their circumstances worse. People are invited to be mindful of their normal and understandable feelings of distress, whether this is anxiety, anger or depression, but to not escalate or react negatively to them.

From a position of acceptance, a space is created where a person can choose to respond thoughtfully out of their values rather than fears. The healthy alternative to reacting and escalation is to ACT:
1) Accept your feelings and be present
2) Choose a valued direction
3) Take action

In dealing with the climate breakdown that has already started and the biodiversity collapse that already surrounds us, we need to muster the courage to accept the reality that is in front of us. Collectively, we are utterly responsible for the predicament we face – it is through the human actions of pursuing the industrial destruction of the natural world and our promotion of an unsustainable and unjust economic model that we are in our current mess.

The power of acceptance is the freedom it gives you. Once you reach a position of acceptance, you no longer have to waste time and energy fighting reality (like King Canute trying to hold back the tide) and instead you can focus on what really needs to be done in these challenging circumstances.

Acceptance gives you the space to avoid the unreality of false optimism, but also not to be sucked into despair and fatalism. While acceptance opens you up to unsettling feelings of grief, anxiety, depression and anger, it helps you be present with these emotions so they can drive you forward and help you live more meaningfully.

– This is the second article in the Changing World, Changing Minds series which explores our emotional response to the climate emergency and biodiversity collapse that surrounds us.
Part 1: Eco-anxiety
Part 2: Denial
Part 3: Channelling anger
Part 4: Coping with grief
Part 5: Talking to children