President says ‘infection during a match is practically impossible, we’ve done a study’ 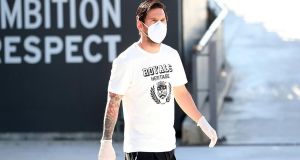 Spanish football should return with the Seville derby on 12 June. If all goes to plan La Liga will be completed by the end of July, with games played every day for six weeks behind closed doors and the title, European places and relegation slots all decided.

There is optimism after teams returned to training over the last three days. Five players have tested positive for Covid-19, with the president of La Liga, Javier Tebas, describing the risk during games as “virtually non-existent”.

Tebas was bullish when he appeared in a specially-arranged TV programme on Movistar, the channel that holds the rights to La Liga, under the slogan “To return is to win”.

Designed to celebrate and project growing confidence the league season can be completed, the show announced Sevilla-Betis will reopen the season, which has 10 weeks left in the first division and 11 in the second division. Although Sergio Ramos said he would like “a few more days”, Tebas expressed his optimism.

“We don’t know [when we can start], no one knows the date,” Tebas said. “It will depend on spikes in the numbers and all the rules being followed. The virus is still there but if it can be on June 12th, so much the better. If we all follow the health rules I don’t think we’re going to have any problem.

“The idea is to finish on July 31st and that August can be left for European competitions. Those dates can [then] also be used for the play-offs [in Spain]. There will be league games every day, as already happens in March and April with a normal fixture list.”

Although that assertion is not true following the Spanish Federation’s intervention to prevent Monday night matches, there has been no suggestion the league will face any challenge to its plan to play daily matches.

A successful return to work for most clubs has been a significant step towards aresumption, following a protocol that runs parallel to the government’s four-phase plan for a lowering of the state of alarm. There have been fewer infected footballers than the league had planned for. Those who test positive for Covid-19 will have to isolate and will not be allowed to return until they have had two consecutive negative tests.

“We expected 25 or 30 positives,” Tebas said. “We had made a statistical calculation based on the spread of the virus in Spain which gave us that number. There are five and three who aren’t footballers. That’s eight from 2,500 tests.

“When the competition comes back, everyone due to play will undergo a test 24 hours before and if he is positive, he won’t play. The test’s failure rate is 5 per cent. The risk during a game is going to be practically non-existent. We’ve done a study that says the place where there is least risk is during the game and where there is the most risk is at home.

“If things are done the way they have been up until now there’s no reason to have five infected players in a single team. If that happens there must have been some negligence. Not the clubs but the players.” – Guardian

Rob Howley ready to start again with Canada after betting ban 10:36
Japan’s new prime minister insists Tokyo 2020 will go ahead 10:28
Diminished Dele Alli shows the gulf between talent and expectation 09:00
Can Thiago bring the right dynamics to save Liverpool from entropy? 09:00
Sam Bennett: ‘A green jersey in the Tour de France is such a highlight of my career’ 07:30

1 Kevin Babington: Learning to live again after life changed forever on Long Island
2 Tour de France: Every yellow jersey winner must feel guilty by some association
3 Can Thiago bring the right dynamics to save Liverpool from entropy?
4 Diminished Dele Alli shows the gulf between talent and expectation
5 Matt Williams: The sky is not falling in on Irish rugby - but Ireland do need a new plan
Real news has value SUBSCRIBE
Crossword Get access to over 6,000 interactive crosswords