China desperately looks for ways to stimulate a baby boom 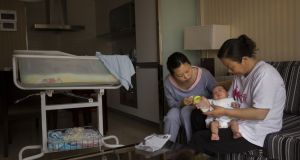 For decades, China harshly restricted the number of babies that women could have. Now it is encouraging them to have more.

It is not going well.

Almost three years after easing its “one child” policy and allowing couples to have two children, the government has begun to acknowledge that its efforts to raise the country’s birthrate are faltering because parents are deciding against having more children.

Officials are now scrambling to devise ways to stimulate a baby boom, worried that a looming demographic crisis could imperil economic growth – and undercut the ruling Communist Party and its leader, Xi Jinping.

It is a startling reversal for the party, which only a short time ago imposed punishing fines on most couples who had more than one child and compelled hundreds of millions of Chinese women to have abortions or undergo sterilization operations.

The new campaign has raised fear that China may go from one invasive extreme to another in getting women to have more children. Some provinces are already tightening access to abortion or making it more difficult to get divorced. “To put it bluntly, the birth of a baby is not only a matter of the family itself, but also a state affair,” the official newspaper People’s Daily said in an editorial this week, prompting widespread criticism and debate online.

In what appeared to be a trial balloon to test public sentiment, the provincial government in Shaanxi, in central China, last month called on Beijing to abolish all birth limits and let people have as many children as they want.

The proposal is politically fraught because removing the last remaining checks on family size would be another reminder that a policy that touched every Chinese family and reshaped society – most Chinese millennials, for example, have no siblings – may have been deeply flawed.

“Among regular people, among scholars, there’s enough consensus already about the policy,” said Wang Huiyao, president of the Centre for China and Globalisation, a research organization in Beijing. “It’s just a matter of time before they can lift this policy.”

A plan to end the two-child limit was floated during the legislative session in Beijing last spring and now appears to be under consideration with other measures, the National Health Commission said in a statement.

Experts say the government has little choice but to encourage more births. China – the world’s most populous nation with more than 1.4 billion people – is aging quickly, with a smaller workforce left to support a growing elderly population that is living longer. Some provinces have already reported difficulties meeting pension payments.

It is unclear whether lifting the two-child limit now will make much of a difference. As in many countries, educated women in Chinese cities are postponing childbirth as they pursue careers. Young couples are also struggling with economic pressures, including rising housing and education costs.

The “one child” policy also resulted in more boys than girls being born. Some parents obtained abortions because the fetuses were female, reflecting traditional preferences for male children, though such selective abortions were illegal. Because of that and other factors, there are now simply fewer women to marry and bear children.

The number of women between the ages of 20 and 39 is expected to drop by more than 39 million over the next decade, to 163 million from 202 million, according to He Yafu, a demographer and the author of a book on the impact of China’s population controls. “Without the introduction of measures to encourage fertility, the population of China will drop sharply in the future,” he said.

In advance of any policy changes nationally, local governments are already taking steps to promote childbirth. In Liaoning, a province in the northeast with one of the nation’s lowest birthrates, officials last month proposed an array of new benefits for young families, including tax breaks, housing and education subsidies and longer maternity and paternity leaves, as well as investments in clinics and preschools.

In Jiangxi province, in the southeast, the government has adopted a more intrusive approach, reissuing guidelines for when women can get abortions. Though the rules were not new, the move raised fears that authorities intend to enforce them more strictly, including a requirement that women who are more than 14 weeks pregnant obtain three signatures from medical personnel before an abortion.

Officials said the guidelines were meant to enforce the law prohibiting couples from aborting a female fetus in hopes of having a boy – though they acknowledged that keeping the official birthrate up was also a consideration.

Two other provinces have tightened the requirements for couples to divorce, saying the changes were made in part to keep alive the possibility of new offspring. Such measures have revived long-standing complaints about the government’s invasive control over women’s bodies. “Women cannot decide what happens to their own ovaries,” one user complained on Weibo, a popular microblogging platform, after Jiangxi detailed the abortion guidelines in July.

The “one child” policy was introduced in 1979 as a way to slow population growth and bolster the economic boom that was then just beginning. The party built a vast bureaucracy of “planned birth” workers to enforce the policy, sometimes with violence. Resistance in the countryside was especially fierce, in part because of a rural preference for male children who could help with farm work.

In 1984, the government allowed rural couples whose first child was a girl to have a second child, and there were other exceptions for ethnic minorities. In 2013, recognizing the implications of an aging population, the government allowed parents who were only children themselves to have two children. Two years later, the limit was raised to two children for everyone, effective January 1st, 2016. The birthrate jumped that year, reflecting the exuberance of those longing for a second child, but it dropped again in 2017, prompting the reconsideration now underway.

One recent government study estimated that China’s labour force could lose 100 million people from 2020 to 2035, then another 100 million from 2035 to 2050. It warned of pressure on “economic and social development,” budget resources and the environment. The economic imperatives have prompted some private companies to act on their own.

Ctrip, the world’s second-largest online travel company after Priceline, already offers a variety of benefits to support parents, like taxi rides to and from the office during pregnancies and bonuses when employees’ children reach school age. Last month, it announced that it would also begin subsidizing the cost of freezing the eggs of some managers – said to be a first for a Chinese company.

The company’s chief executive, Jane Sun, said Ctrip was acting out of a sense of social responsibility but also responding to economic factors: A declining population hurts growth. James Liang, a co-founder of Ctrip, has written a book warning of the impact of China’s shifting demographics on technological innovation.

“The generation before us only had one child, so in their mind having only one child is the normal thing,” Sun said in an interview in the company’s Shanghai headquarters. “I think we really need to have a sense of urgency – from the top down and the bottom up – to encourage families to resume a healthy birthrate.”

In a written response to questions, the National Health Commission said the “two child” policy was working. While the total number of births dipped to 17.2 million last year – compared with nearly 17.9 million in 2016 – the percentage of families with two children has climbed from 36 percent in 2013 to 51 percent today, it said.

The commission acknowledged that couples faced many obstacles to having a second child and said the government was working on policies in areas like taxation and education that would address them. “To eliminate the concerns of the masses and sustain the birthrate, we need to focus on the practical difficulties in fertility and child-rearing,” it said.

Demographic experts warn that it will be difficult to change people’s reproductive behaviour. Shang Xiaoyuan, a professor at the University of New South Wales in Sydney and an expert on child welfare in China, said the government needed to help the families most likely to have a second or third child. “This kind of family should be given more support and should have more invested in child welfare: early education, maternal and child health,” she said.

Better benefits and services will not be enough to persuade everyone. Sun Zhongyue, a 27-year-old accountant in Beijing who is pregnant with her first child, said she had already ruled out having a second, citing workplace discrimination, the costs of education and the social strains on extended families.

While grandparents often help with child care in China, the majority of Sun’s generation are only children who are expected in turn to support their aging parents.

“Although elders can help us look after the kid, they cannot once their health worsens,” she said during a visit to a government office to obtain reimbursement for her maternity care. “Raising a child is stressful,” she added. “It costs money and manpower.”