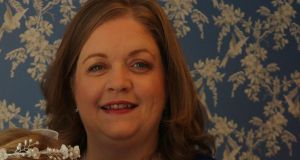 “It’s impossible to explain how much change has happened since the pandemic began,” says Annmarie Sliney, a single mother to nine-year-old twin daughters, Méabh and Áine, as she talks about the challenges of working at the front line. “Balancing the needs of my job with the constantly changing needs of my children has been an enormous learning curve.”

Sliney has worked in the health service for more than 27 years. An assistant director of midwifery and nursing at the Rotunda Hospital, in Dublin, she says she has been humbled by the response from everyone involved to ensure staff can safely provide care to women who attend the maternity hospital.

“Pregnancy and childbirth is an unpredictable business,” she says, “and can’t be rescheduled. So we continue to provide care to our mothers and babies while changing what we do to ensure their safety. We are constantly adapting to ever-changing patient and service needs. Those first few weeks and months of working through the pandemic saw changes to how things were done sometimes two or three times per day as advice was issued by the HSE.”

Exposed to the threat of infection, at risk of increased stress and anxiety, and facing the added pressure of ensuring the safety of immediate family, parents working on our front line have been dealt a significant challenge.

Sliney’s working hours change from week to week, with 14-hour shifts, night duty and early-morning shifts falling on all seven days of the week. This difficult enough to combine with her daughters’ needs in an ordinary year, but with school closures and other upheavals around the corner, Sliney, like many parents, faced considerable stress from an ever-evolving childcare situation.

“My focus is always on my children, and I honestly feel that once I knew the girls were okay then I was okay. So my first concern was balancing my children’s needs with my work commitments. However, within a week of the pandemic starting, our live-in au pair had to go home as her mother was unwell. We were so sorry to see her go but understood her need to be with her family.”

The sting of losing a valued member of Sliney’s support network prickled even more when the original announcement of school closures and work-from-home measures guaranteed to disrupt family and work life. Hit with the initial shock of the children being home 24/7, Sliney had to answer the question of childcare in a new and anxious world. As with many plans over the past 12 months, her first solution of living with her parents took a swift U-turn. Her retired parents were eager to support Sliney, but when her mother began to show symptoms of Covid-19, plan A was off the cards.

“The next plan was to pack up and move in with my sister, brother-in-law and their three children,” she says. “I could go to work, and the girls would be looked after. But I was concerned about this, as my sister is also a frontline health professional, and we both work in different areas with a risk of exposure to Covid-19. But there was no alternative.”

What was proving to be a significant worry and a challenge for Sliney’s family was luckily taken out of her hands by the kindness of her community. “The day before we were due to move to my sister’s house, a friend who lives a few doors along offered to look after the children. To say I was taken by surprise would be the understatement of my life. I was so touched that this family would even think of our needs while themselves trying to juggle working from home and caring for their own children.”

What transpired was Sliney and two neighbourly families forming a social bubble to help navigate Sliney’s shift work and care for the twins. In this way, Sliney and the girls were able to stay in their own home at a time of much apprehension and unease. The supportive and giving nature of Sliney’s newest support network relieved worries, and eased fears for not only her but for Méabh and Áine, who were naturally missing friends and the routine of school as the pandemic continued.

“We have become so much closer to these two families who went above and beyond in caring for the girls. Their love and care has meant I have not missed a single day at work. A huge thank you to Audrey and Paul Frost, Najwa Issa and Rob Johnston.”

Without this selfless and empathetic support network, the flux of childcare may have brought about significant challenges for Sliney and her children. Nevertheless, as with any change, Sliney says, “It was a difficult transition. We were living a new normal, but it would not have been possible without the love and support of these friends.”

For many parents working from the front line, the issue of childcare is just one matter to navigate. Raising children in a pandemic has been fraught with not only our own anxieties but those of our children who are worried about parents becoming ill and the unknowns which come with fighting an enemy you can’t see.

“Like everyone else, the girls were learning about Covid-19 and the many dangers it involved,” says Sliney. “They were worried about their grandparents and people they love becoming unwell. And they were worried that I was still going to work while all of their friends’ parents were staying at home.”

While caring for her daughters’ emotional needs, Sliney continually ensured them of their safety, and encouraged them to stay connected with friends and family. “I tried to reassure them that we were all taking the necessary precautions to keep everyone safe and that there was lots of work going on to find a vaccine, but the perception of time is very different to a nine-year-old and there were days when we all had a little cry.”

As a single parent, for the first time since the girls were born, I felt lonely

Like everyone else, family milestones were postponed, birthdays were celebrated at a distance, and promises broken. “Each cancellation was harder than the last,” says Sliney. “We have made a real effort to help Méabh and Áine to interact, albeit in a virtual world. We’ve learned to use Zoom for family quiz days, and the girls have had great fun coming up with questions they are experts in which the adults can rarely answer!”

As lockdowns and travel restrictions became a new reality, isolation also became a burden for Sliney. “As a single parent,” she says, “for the first time since the girls were born, I felt lonely.”

Unable to visit her dad on his 70th birthday and cancelling his planned birthday celebrations at Centre Parcs were difficult in light of the loneliness felt at a time when we were so in need of such celebrations.

A year into navigating this new world, Sliney has learned to balance the front line with family life, ensuring her priorities are met when she is on and off duty. “It can be difficult to leave work at work but now more than ever I try to focus on just being Mum when I’m at home.” Looking on the positive side of things, Sliney recognises the good things which happened during the past year for her family.

“We now have an alternative childcare solution thanks to our lovely new childminder, Jean,” she says. “We celebrated Méabh and Áine’s First Communion in September with a handful of family members. And while our family has been touched by Covid-19, we have been lucky not to have anyone become very unwell. I’m very aware that everyone has their own challenges. For that reason, I’m grateful for all I have and the health of my family.”