Based at Number One Ballsbridge, in D4, the club takes swankiness to a new level 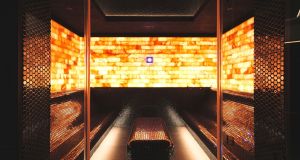 First Look: Eden One, Ireland’s most expensive gym, based in Ballsbridge, in Dublin 4

A giant glowing bucket of ice chips, an actual snow shower and a sauna that comes with sauna masters who will waft essential oils in the direction of sweaty patrons are among the more surprising aspects of Ireland’s most expensive gym, which has just opened in Ballsbridge, Dublin 4.

The novelty doesn’t stop there, not by a long shot.

Anyone who can afford almost €3,000 for their first year’s membership of Eden One – €200 a month plus a €500 joining fee – can also look forward to flames made of steam and light, intelligent gym equipment that watches their every move and treatment rooms that have, the owners say, the purest air on the planet.

There are also curved marble loungers – more comfortable than they sound – heated for your pleasure, plus a room featuring Himalayan salt walls and a device that blows tiny particles of salt at you to enhance your breathing and your health.

All that is missing is a person to lift your weights and do that tiresome treadmill run that you don’t fancy because you’re too busy entertaining your beautiful friends in the bar – yes, there is an actual dimly lit bar area that was stocked with actual booze when The Irish Times arrived for a peek at how the flash will be working out in the months ahead.

The gym – or health club and spa to give it its proper name – has just opened its doors in Number One Ballsbridge, which also houses one of Ireland’s most expensive apartment complexes. This is swankiness on a whole new level.

Once members have made it past the concierge and Eden One staff, and through two locked doors – getting into the White House situation room could be easier – the first thing you see is the Orangerie, an expansive and expensively fitted out space, shared with residents of the 89 apartments in the building, full of huge sofas, tables and workstations. The idea is that Eden One members will have meetings here, discussing matters of State (or instead, perhaps, who has just been booted off Dancing with the Stars).

From the Orangerie a lift takes you up to the club proper, which is themed around “eight elements”: earth, air, water, fire, dark, light, ice and nature. The first thing you see is the not-so-healthy part of the healthy club: a bar and dining area with moody lighting and gleaming tables where members can bring up to four guests to eat and to drink.

After the club comes the club.

He certainly seems to have done that.

“A lot of our staff have come from hotels, and we have people from Adare Manor, Powerscourt and the Merrion,” he says as he walks down a dark corridor off which there are five large treatment rooms with outsized beds.

He tells me they will be using Natura Bissé treatments. I nod as if I know what he’s talking about. Back in the office, I google Natura Bissé and see that a small bottle from its skincare range can easily cost more than €100.

We move to the relaxation space, where three heated, electronically adjustable loungers sit.

After that comes the actual gym. It is wall-to-wall complicated-looking machines as you might expect, but they are all stylish in a way you might not. They are black and grey and come with screens to show you how to use them properly. They also monitor your exercise, and can be connected to your personal profile to keep your gym instructors informed about your progress.

Mind you, if you want the instructors – who all look as if they are auditioning for a film called Beautiful People – to be impressed with you, then it will be best not to hook up the machines to your Netflix account, something which is easily done too.

The Technogym rowing machines allow people to compete with other rowers in the room and are also hooked up to a global network, to allow them to compare their rowing progress with gym bunnies across the world.

There are three studios: one is full of fancy treadmills and softly lit by neon strips; one is a dance and yoga studio; and the third is a spinning room, one wall of which is taken up by a giant screen to allow people to cycle through the French Alps, or wherever. Spinners can compete against each other – or choose to remain anonymous – to gamify the experience, and all the bikes are kitted out with weights to allow for body workouts while you spin.

We are the most expensive place in Ireland, but I think when people see what we have put into it they will understand why

Bourne says that Eden One will hold 100 classes a week and given that there are no more than about 1,000 members there should be no need to book classes in advance.

The changing rooms are kitted out in marble and leather with brightly lit vanity areas. All the showers have enormous rain heads; the shampoos and body washes are bespoke, designed by Bourne’s wife, Claire.

And then we move on to the pool area. The 15m infinity pool – with a jet current that serious swimmers can swim against – is separated from the hot hydrotherapy pool with a fire break; all the “fires” in the communal areas are created through a combination of steam, water and light to make them as environmentally friendly as possible, Bourne says.

The pool complex is overlooked by a large sauna with a glass wall. The “sauna masters” who will throw “balls of ice infused with essential oils” on hot coals, before wafting the steam in the direction of members, are bringing this practice to Ireland from Germany. Eden One also has a smaller sauna that is, perhaps, more humble.

The snow shower and the giant blue-lit bucket of ice shavings replace plunge pools; there is also a relaxation area overlooking a garden where a waterfall babbles away. There are so many distractions that it’ll be a wonder if anyone actually has time to work out in the place.

The elephant in the room – in all the rooms – is the price of the place. Bourne makes no apologies about the membership fees. “Yes, I think we are the most expensive place in Ireland, but I think when people see what we have put into it they will understand why – and we think the facilities we have here are the best in the country.”

If you don’t want to stump up all that money, for €175 you can get a day pass that will entitle you to two treatments in the spa, lunch and full access to the gym.

Bourne says that membership take-up has been brisk. One reason for that, even if people won’t admit it to others or even themselves, is likely to be nosiness-tinged elitism. People might join simply so they can rub shoulders with other people who can also afford to pay the guts of €3,000 for their first year’s membership. And who knows: they might get to sweat alongside Ryan Tubridy or Marty Morrissey in the sauna, pump iron with Bryan Dobson and Áine Lawlor and spin with Miriam O’Callaghan. How can you put a price on that?