Dear Roe: I’ve spoken to him many times, but he reverts to the same behaviour 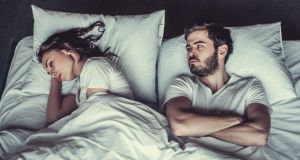 Rule 1 is that when you say no to sex, that’s the end of the discussion – there is to be no nagging, no sulking, no emotional manipulation. Photograph: Getty

Dear Roe – my partner wants sex every night, sulks when I don’t agree, and wants to know why. I’ve spoken to him many times about this and explained that I don’t always need a reason. Things will be okay for a while, but then he reverts to the same behaviour. It’s really frustrating. We have sex at least three times a week, but it’s not enough for him.

You may think that the term “coercion” is extreme; it’s not. Punishing a partner for not having sex by being disrespectful, emotionally distant or angry creates a dynamic where saying no to sex becomes imbued with anxiety or even fear of emotional retaliation. Consent is enthusiastic. Agreeing to sex only to avoid punishment is not consent. It is the result of coercion.

Flip the script of his questioning and explain why you do want to have sex with him when you do. What makes you feel  engaged and turned on?

You know your partner better than I do, however, and there is a possibility that he is not trying to be manipulative or cruel but is feeling rejected and reacting to those feelings immaturely. Being the partner with a higher sex drive can leave a person vulnerable. Having sex may be how he feels connected to you, and your rejecting sex could feel as if you’re rejecting him.

To be clear, his sulking is still unacceptable. But his feeling hurt is easier to deal with than his feeling entitled. Feelings of rejection can be diluted and assuaged. Entitlement, however, tends to run deep.

You need to have a conversation where you both express how you feel when he wants sex and you don’t, you both set clear pathways of communication and boundaries, so you can both deal with this situation when it arises, and then you both need to respect that agreement.

It would be useful for you to flip the script of his questioning and explain why you do want to have sex with him when you do. What makes you feel engaged and turned on and eager to have sex with him? Do you feel more enthusiastic about sex with him when he acts romantically or when you yourself feel invigorated, attractive or appreciated? Explaining this will make it clear to him what sex means to you, and what enthusiastic consent looks like – namely, that it doesn’t look like him trying to sulk you into submission; it looks like both of you being aware and respectful of each other’s emotional states before and during sex.

Rule 1 is that when you say no to sex that’s the end of the discussion: there is to be no nagging, no sulking, no emotional manipulation. He will respect your right to say no. You can also respect his feelings, and take account of them. But he needs to learn how to express these feelings and ask for what he needs in a healthy, respectful way.

If he’s looking for sex in order to feel connected to you, he can ask you for some physical affection, whether that means cuddling or having a kissing session (hugely underrated and often overlooked in long-term relationships). If he wants to feel attractive, make sure that he feels comfortable asking for some validation, and that you’re offering it regularly.

Issues of libido are rarely just about a difference in sex drive. Your partner has to learn how to communicate in a respectful, self-aware and considerate way

Often, women are allowed fish slightly for compliments on their physical appearance, and also get them from other people, such as supportive women friends. Men generally get fewer compliments on their appearance, but everyone deserves to feel attractive. So make sure that regularly you tell him when he looks good, that you’re effusive and passionate in your praise, that he knows you find him sexy – even if you don’t want to have sex every hour of the day.

In the same vein, make sure that when you do want to have sex you are initiating it, at least occasionally. This will ensure that your sex life feels more equal, and that he doesn’t always feel like the one asking for, and being rejected for, sex.

Issues of libido are rarely just about a difference in sex drive; they’re about a lack of healthy communication. Your partner has to learn how to communicate in a respectful, self-aware and considerate way. If he keeps being sulky and manipulative and coercive, you may need to communicate with him that he’s single.

Roe McDermott is a writer and Fulbright scholar with an MA in sexuality studies from San Francisco State University. She’s currently undertaking a PhD in gendered and sexual citizenship at the Open University and Oxford

Is it normal for a woman to fart when she orgasms?
9