Fifteen years ago Fintan’s nightmare ended, and his family’s began 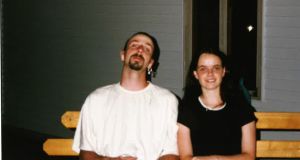 Fintan and Gabrielle, during the 1990s, on holiday in the US.

This was an unsettling conversation that was relayed to me by a friend, in between her hysterical bouts of crying. Our mutual friend clearly needed our help. One of the hardest phone calls I have ever had to make was to call his mum that same afternoon.

As I struggled internally with the bleak reality of what might happen, I tried to explain, as sensitively as possible to her, that we were gravely concerned about her son’s mental wellbeing. Critical action had to be taken; immediately.

She was shocked. She thought she knew her son.

My mum thought she knew her son too. On a devastating day, 15 years ago this week, she discovered, in the most traumatic way, that the depths of her son’s struggle ran far deeper than any of us had fully realised.

I’m a problem solver, a doer, a solutions finder. This left me frozen

Fintan, aged 31, was living alone in a country cottage in Co Tipperary. It was well known by all of us in our family that he was struggling with his fight against depression. He had been in the care of professional help via the public health system for quite some time. On March 19th, 2003, however, we cruelly found out, that help was not enough. In the early hours of that beautiful spring morning, Fintan made a final decision and it changed all of our lives forever.

I’m a problem solver, a doer, a solutions finder. This left me frozen.

Fifteen years on, I can still vividly recall every single detail that followed the moment my eldest sister rang me and uttered those unbelievable, gut wrenching words: “Fintan is dead.”

I remember dropping the phone, letting out a scream that felt like it was coming directly from the depths of my heart and then just going numb.

Somehow, I knew that autopilot was the only way I was going to get through this trauma. I’m the youngest girl of 12 children and Fintan was the youngest boy. We were “the babies” of the family. I spent my childhood idolising him. He always looked out for me when we were growing up and then as adults, I tried to return the favour and look out for him. I failed, though, and now he was gone; forever.

Fintan’s decision rocked my entire family to its core. I am not and never have been angry with him for the choice he made. I am, however, incredibly angry at the circumstances in which he found himself that night. Alone in his cottage, the demons pounced and the horrendous option of ending his life so brutally, became for him, at that moment, the only choice.

There is something fundamentally wrong with our society when so many young people, particularly young males, in Ireland believe suicide is the right option for them.

Fifteen years later, thankfully, suicide rates have reduced in Ireland, but are still too high – 399 deaths by suicide were officially recorded by the National Suicide Research Foundation in 2016, compared with 497 the year Fintan died. Of the 399, 318 were male. One of the leading external causes of death in Ireland among young adults aged 15-44 is suicide. We need to talk more about the impact of suicide on those left behind. There’s nothing glamorous about the sheer devastation that remains for decades afterward.

There is no question that we are, as a society, talking more about promoting positive mental health and wellbeing, but we also need to talk more about the “forever” of suicide. A hard hitting advertising campaign focused on “suicide is not a solution”, involving family members left behind or someone who attempted suicide and thankfully survived, telling their story, could relay a really powerful message. Harrowing stories like these from real people, forever scarred, need to be heard more loudly and repeatedly across all media. Celebrities play an important part in helping to raise awareness about looking after your mental health, but this needs to happen in tandem with a stronger, primary suicide prevention ad campaign so that the reduction of Ireland’s suicide rates can be further accelerated.

My brother didn’t make it. My friend did and is thriving to this day.

In the wake of my brother’s suicide, I sought out professional support and learned how to better equip myself when talking with someone who is struggling with their mental health. (The HSE provides safeTALK suicide alertness half-day training workshops all over the country.)

I’ll never forget having to ask my friend that blunt question to his face, “are you having suicidal thoughts”? Inside my head, a voice was screaming, “I wish I had asked my brother that same question”.

I struggled to keep my composure as I waited anxiously for my friend to answer. When he eventually said “yes” my body froze. While I had anticipated that answer, hearing him actually admit his struggles out loud, so vulnerably but honestly to me, was breath taking. I wanted to crumble there and then. But I couldn’t. This was about my friend and he needed my help.

Thankfully, with the appropriate professional intervention, a strong network of family, combined with the right support from friends and colleagues, my friend has come out the other side. The darkness has cleared to let the chinks of light in and today he’s thankful he chose life.

Since I’ve become a mother, I have had to embrace a whole new loss

In contrast, when I hear the squeals of laughter from my three-year-old son and seven-year-old daughter because their Uncle Martin is chasing them around our sitting room, my heart sometimes feels broken all over again. Fintan, who should be 46 since January but forever frozen at 31, loved playing with my sisters’ children. Since I’ve become a mother, I have had to embrace a whole new loss; the void that exists because Fintan never got to meet my children.

He should be here.

As we mark the 15th anniversary of Fintan’s death, my only wish is that those of us left bereaved by suicide can work together more effectively with the relevant mental health organisations in Ireland. By sharing our experience, we can hopefully, in some small way, help so that more Irish families can avoid the heartache of losing their loved one in such a pointless way, forever.

– On Saturday, May 12th, the 2018 edition of “Darkness Into Light” – an early morning walk or run – will take place throughout Ireland, and in many countries throughout the world. As well as raising awareness about suicide and self-harm, it is the flagship fundraising event for Pieta House, with 150,000 people taking part last year. More info at pieta.ie. Early online registration opens today - Friday, March 23rd, 2018.

‘I am the only person in the pool.’ A postlockdown stay at a landmark Dublin hotel
10