Before you judge a sleepwalker, walk a mile in my slippers 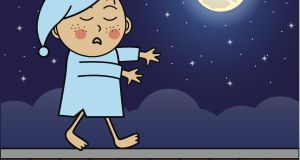 Sleepwalking is most common among children

My bedtime routine is fairly standard. I brush my teeth. I turn on the bedside lamp. I make sure the phone is within easy grasp. And then for a while there, I took to propping a large “Stop” sign on the back of the apartment door and depositing the key in a small, ornate bowl, located away from the point of exit in the main living area.

I sleepwalk you see.

Recently, I managed to turn the key of my apartment, which I’d always just left in the door at night, and step outside in my pyjama-clad state at three in the morning.

I didn’t find myself there. Non-sleepwalkers tend to think that’s how it works. But not for me anyway, I was fully aware of what I was doing as I did it, but equally fully convinced that what I was doing had to be done. Until that is, I realised it didn’t.

Luckily, I omitted to pull the door behind me and so could slip back inside and, as a single resident, forgo a night curled up on the first floor corridor waiting for the sun to come up.

It’s funny, we tend to think of ourselves as rational creatures. Reasonable, coherent, level-headed. But there’s nothing like a bout of sleep-walking to put all that to rest. It exposes us as well, mere creatures of the night, subject to stress, susceptible to thoughts and sudden impulses.

All in all, an entirely humbling experience.

In my own case, sleepwalking is about fixating on something. I have a recurrent dream, which I’ve been having, on and off, for decades now that I need to go somewhere or see someone or do something and this has to happen now, right now as I’m already so . . . so . . . late.

This anxiety can manifest itself in any number of ways. I’ve sat bolt upright at three or four in the morning and reached for my phone, frantic to apologise to a friend or work colleague over my tardiness, before quite literally coming to my senses. In the light of day, I’ve even scrolled through that list of “Calls Made” to make sure, to make absolute sure, that I didn’t actually do it – practically wiping my brow with the back of my hand when confronted with a happy lack of evidence.

I’ve bolted from sleep at around 5am and hurriedly got dressed, desperately rummaging for items of clothing until perched on the edge of my bed, the sight of my shoes and socks oddly prompted me into coherence.

Perhaps best of all, while sleeping on a sofa bed, I managed in my haste to slip and wallop my forehead against the wooden floor, having to apply a makeshift icepack to the swollen area in the grim, early hours. The bruising around my eye kicked in roughly a day later. A veritable kaleidoscope of black and red and purple which prompted a tsunami of sad and puzzled looks.

A part of me wanted to pull a kind of Grace Kelly and wander through the next couple of weeks in sunglasses. Anything was better than confessing to the mundanity of sleep-walking or in my own case sleep-sprinting.

It’s a rare enough occurrence and fortunately so far I have always made it back to my bed to get on with the business of sleeping. But it’s an embarrassing predicament, nonetheless, and one that’s vaguely unsettling in social circles.

But maybe I’m slowly coming to terms with it. I made the “Stop” sign with a bright pink marker and found myself smiling at its dumb desperation when propping it up there recently.

For the most part, though, I’ve given up on that strategy as I have with locating the key as far away as possible from the front door.

Friends muttered darkly about fire and smoke regulations when I went into the whole thing with them.

Instead, I’m trying to figure out how I can get a spare key outside in the corridor or even somewhere in the complex. The post box may be a runner. It’s just about possible to slip a hand through the slot and rummage around inside but as options go, it’s clearly not the most security-conscious.

Somebody recommended a separate box of some sort that can be secured to the wall and has a code. It’s used a lot for air bnb, so I’m told, and sounds pretty doable so I may look into that.

It’s odd finding yourself mulling over ways of protecting yourself from yourself, the aim of the game being to get back inside the apartment and under the duvet as quickly and efficiently as possible.

And all in the name of exiting the apartment the following morning and entering the world in a sensible, lucid, appropriately clad and ever so grown-up state.

– Also known as “somnambulism”, sleepwalking is a parasomnia (involving undesired events that come along with sleep) and results in large movements in bed or walking during sleep.
– It can involve sitting up in bed and looking around, getting up and walking (or even running) around. Sleepwalkers may also talk or shout, and usually have their eyes open.
– In rare cases, someone sleepwalking has driven a car.
– It is most frequent in children (affecting up to 14 per cent) and is usually a benign, self-limited maturational occurrence.
– It can be difficult to wake up a sleepwalker. They are often confused, and may have little or no memory of the event.
– Sleepwalking most often occurs in the first third of a night’s sleep. It can even occur during a daytime nap.

Emergency medicinal cannabis to be collected from Netherlands