My Health Experience: ‘I can still move my arms enough to put them round my wife’ 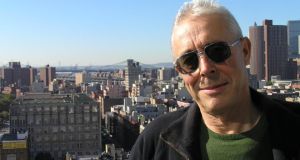 Peter Carvosso: the first sign that something was wrong was a pain in his left shoulder.

I wish I had been a little less cynical about the ice bucket campaign last summer, joking with my wife that the sooner they introduced the water tax the better.

Well, that came back to haunt Mr Smart-Ass Carvosso.

Just a few weeks later, a doctor who looked disconcertingly like Jim Carrey, the comic actor with the impossibly wide smile, gave me some news that wasn’t funny at all. In this role he was Scary Carrey as he told me I had the illness all those celebrities got a soaking for.

The doctor, Peter Widdess-Walsh, is a very warm man, and this shines through his professional presentation. I almost felt sorry for him as he struggled to come out with the words: motor neurone disease.

It’s the one that became well known in Ireland after RTÉ’s Colm Murray revealed in 2012 he was suffering from it. I was editor of the Irish Independent Weekend Review at the time, and we ran a front cover with a picture of him, lauding his courage as he faced up to this terrifying illness that shuts down your body but not your mind.

I’m sure he was braver than I am. I haven’t even had the courage to Google it yet. I’ve been too scared to ask the doctors any hard questions.

I suspect that my wonderful wife knows more about my prospects than I do, but I’m frightened to ask her. I joke with them all that I’m in Cairo’s river: de Nile.

It all started, although I had no idea at the time, just a few months ago. I had a pain in the top of my left shoulder when I lifted my arm. It didn’t bother me: I just put it down to wear and tear.

I love fly-fishing for trout and would spend hours on my favourite rivers – the Liffey, the Nore and the Anner – wading upstream looking for the tell-tale rings that show where a fish is sipping in an olive or perhaps a sedge. This summer I found myself getting tired quickly and said to my wife that age was beginning to creep up on me. The weariness vanished on those rare days when the trout went mad for the fly, a syndrome every angler will recognise.

It was difficult getting in and out of the river, and one day I had a real scare when I got stuck in a boggy bit of bankside.

I caught my last trout, a handsome little half-pounder, on the beautiful Nore at Thomastown, Co Kilkenny. I gave him a special little tickle as I gently put him in the water to swim away.

The final line in my angling diary says: “Last cast?” And I put the fly I used – a black and peacock spider, since you ask – into a box by itself.

The next clue that something was wrong was when I had to put an extra notch in my belt.

I had needed to lose a bit of belly, the product of my liking a glass of wine and the occasional whiskey. In the spring, as an experiment, I decided to give up the drink for a few months. So, I had a new teetotal tum. That, I thought in my innocence, explained the weight loss.

The next step, or rather non-step, in my decline was a pain in my left calf which left me with a bit of a limp. I put that down to one of our three-hour country hikes.

Over the next few weeks my walking got worse; I could scarcely make half a mile round the block. I felt that my arms were getting weaker, too.

Another symptom was a slight difficulty swallowing, which meant I wasn’t eating as much as I should.

And to cap it all I was sleeping badly, waking up every couple of hours and fretting.

Then I weighed myself and was shocked to find that I’d lost about two stone.

A typical man, it was only then that I thought I’d better get checked out by my GP. I told her what had happened and said I thought it must be cancer. Then, to my amazement, I burst into tears and blubbed for the next 10 minutes as she dabbed my eyes with tissues.

She got the ball rolling with blood tests, X-rays and a trip to a psychiatrist to see if anxiety was causing my weight loss, or vice versa.

The tests all came back okay, which just made me think they were looking in the wrong place.

He went into action immediately. He admitted me for a short time while the hospital monitored me, boosted my food intake with special protein supplements, arranged a rake of tests at the Blackrock Clinic and tried to allay my very real worries.

I suppose anyone would feel fearful about a psychiatric hospital, but I felt safe and cared for. Almost embarrassingly so. The doctors, nurses, physio, occupational therapy people and social workers were extraordinary. I felt like saying, that’s enough about me; how are you? Just good manners, really.

My response to everything was that my head would be grand as soon as I put on weight and could walk properly again.

At the Blackrock Clinic, they stuck cameras down me, up me, scanned me from head to toe and did even more exotic blood tests. Every day the nurses gave me more good news: no cancer, good heart, lungs and liver. They told me I didn’t have diseases I’d never even heard of.

I was a very healthy 60-something, apart from shuffling around like a drunk penguin and gulping for air as if I’d just finished a 10-second 100m race.

Everyone was seriously concerned about my breathing, which I had put down to panicking about my other ailments.

After dinner they put me on a breathing mask, and at 10pm Dr Widdess-Walsh came in to deliver the grim news. That was a few weeks ago and I’m still in the clinic.

My next instalment will be about how you cope when you hear your life will be much shorter than you’d expected. All with the help of the fantastic staff here and my family.

The problem is that I can type with only one finger. But I’m hoping to be able to raise the finger to MND for a while longer.

For the moment I’m happy that I can still move my arms enough to put them around my wife, squeeze her and pretend for a few moments that nothing is wrong.

Peter Carvosso is a journalist. He hopes to write further about his illness in Health+Family.

Michael Harding: I was in my underpants, finishing off the pint...
9