My Health Experience: ‘I am living with motor neurone disease, as opposed to dying from it’

With MND, many experiences are an unknown last, but my mini-marathon will be a first 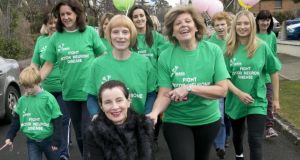 Eileen Finn, who has motor neurone disease, training for the women’s mini-marathon with friends and supporters. Photograph: Colm Mahady/Fennells

I was diagnosed with motor neurone disease (MND) on November 22nd, 2012. Some 95 per cent of people die within one thousand days of diagnosis. My expiry date is in or around August 19th, 2015; my best-before date was some years ago.

I have a life: it’s not a great life, but it’s still a good life and it’s the only one I have. I intend to make the best of it. I am living with MND, as opposed to dying from it. This is being made possible by an outstanding family, enormously supportive friends and wonderful colleagues.

MND is often referred to as amyotrophic lateral sclerosis (ALS) or Lou Gehrig’s Disease, especially in North America. Gehrig was an American professional baseball player who played 17 seasons in Major League baseball for the New York Yankees, from 1923 to 1939. Gehrig’s baseball playing career forced him to retire in 1939, at the age of 36, after he was diagnosed with ALS, and he died two years later.

MND is a progressive neurological condition. It attacks the nerves in the brain and spinal cord. Messages gradually stop reaching the muscles, which leads to weakness and wasting. MND can affect one’s ability to walk, talk, eat, drink and breathe.

There is no known cause, there is no effective treatment and there is no cure. There is some research that suggests that overweight and obese people have a lower risk of MND than people with a normal healthy body mass index and people who are otherwise healthy and fit.

It then seems doubly unfair to be struck with the disease if one has followed most of the rules and the received wisdom regarding diet and exercise.

Although I was diagnosed only in 2012, I had symptoms for a number of years. I had numerous falls and broke my ankle, two fingers, my collar bone and fractured my ribs.

My first major accident was in Prague in 2009. The breaks appeared to take an inordinate amount of time to heal and I suffered many less serious falls. What I failed to realise was that the weakness in my leg and ankle did not result from the break, but from a more malign underlying cause.

I became seriously concerned in 2010 and started what became a long search for a diagnosis. I went from St Vincent’s hospital to St James’s Hospital, and ultimately to Prof Orla Hardiman in Beaumont Hospital, where I was eventually diagnosed. Before diagnosis, I had various scans and two nerve tests, known as electromyograms (EMG), at two hospitals.

This was the most excruciating pain I have ever encountered even though I’m lucky enough to have given birth to four sons, of whom one exceeded 10lb. In It’s Not Yet Dark, Simon Fitzmaurice, another MND survivor, refers to it as a pain he will “never not remember”. Suffice it to say the procedure involves driving needles deep into the nerves in the legs, arms and spine.

The day after my diagnosis, I was due to travel to New York to celebrate my eldest son’s engagement. He will get married in Florida in August, but unfortunately I can’t be there. My last flight was to Rome in May 2014 for another wedding, although I did not realise that at the time. With the progressive nature of MND, many experiences are an unknown last.

As mentioned earlier, motor neurone disease results in the weakening and wasting of the muscles. This, over time, can result in an inability to walk, use one’s arms and hands and possibly to talk.

The brain works perfectly: witness Stephen Hawkins. At the time of writing, I am completely wheelchair bound. I need assistance getting in and out of bed, washing, dressing and doing even the most menial chores.

Although there is no cure, quality of life can be greatly enhanced through the use of technology and equipment. This equipment is available through the HSE, to medical card holders only.

Contrary to popular opinion, there is no “entitlement” to a medical card for people suffering from MND if they continue to work. There is an inverse relationship between what one puts in and what one gets out.

The Irish Motor Neurone Disease Association has proved invaluable to me with the provision of medical equipment, which can be prohibitively expensive. It has provided a manual and electric wheelchair, a hospital bed and a special air mattress. A wheelchair is a necessary evil for an MND sufferer, whose disease has progressed to a level where walking is impossible.

The constant use of a wheelchair brings many problems, not least, it precipitates the weakening of muscles and exacerbates poor circulation. Therefore additional equipment is needed to counteract the negative effects.

An EasyStand stander gives support to a wheelchair patient and MND sufferer by improving circulation, bone density and flexibility with daily standing therapy. It also allows the user to move in and out of standing without having to be lifted or transferred, making things easier for the carer.

This stander is not provided by the association at the moment, but it is something that in my view would be highly desirable and would improve the quality of life of MND sufferers. As with all equipment and support services, funds are needed to provide them.

The Irish Motor Neurone Disease Association is the only organisation dedicated to helping and supporting people living with MND, their families and carers. Its services have made a real difference in how I have coped so far.

It relies on donors and supporters. Last year its coffers were boosted by funds generated from the ice bucket challenge, with which many readers may be familiar. This challenge of dousing a participant in ice-cold water started in the US.

The origin is unclear, but it appears to have been started by Pete Frates, a Boston College student who was diagnosed with MND in March 2012. In Ireland, each participant in the challenge, once finished, donated to the association through text message, and went on to nominate others to do the same.

I do not propose to participate in the ice bucket challenge. Instead, with a team of supporters I intend to walk – or, more correctly, to be pushed – for 10 kilometres in the VHI women’s mini-marathon on June 1st.

Our challenge is to raise €30,000 for the association and to give something back to what I have found to be a wonderfully supportive organisation. All donations, no matter how big or small, will help me achieve what may be my final public challenge.

For an uplifting and optimistic take on MND, see Lou Gehrig’s Luckiest Man on the Face of the Earth speech – recorded at his last appearance in Yankee Stadium on July 4th, 1939 – at iti.ms/1dwnp7h