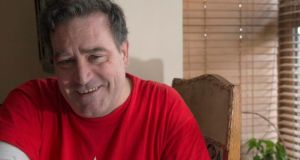 Dan Boyle: is grateful for the level of care he received at Cork University Hospital. Photograph: Michael Mac Sweeney/Provision

When I called to my doctor the other day, he said he hadn’t actually been totally honest with me. My white blood cell count had been extremely high and the doctor said that indicated only two possible scenarios – virulent infection or cancer. I think he was right not to tell me because I don’t know if I’d have been able to handle the possibility of cancer.

Before the Christmas period, my temperature was all over the place. I was burning, sweating and shivering. I had a slight ache in my side but I felt that was liveable with. But I was getting encouragement from someone to go to the doctor and I eventually did that.

I had an X-ray which showed a shadow on my lungs. That was consistent with pleurisy which the doctor thought was the nature of the problem. The flu-like symptoms seemed to be masking pleurisy but the white blood cell count was still far too high for it to be pleurisy itself.

At my second visit to the doctor, he arranged for me to be put into the acute medical assessment unit at Cork University Hospital. It’s far better than A&E and is something that GPs should be making greater use of.

I was in there for a series of tests and thought I’d be coming home after them but I ended up staying 12 days in hospital. I had a lot of blood drawn and I had an ECG. Eventually, it was a CT scan which showed that my liver had a series of spots.

Again, there was a degree of uncertainty. If the spots were soft, they were benign, and if they were hard, they were something else. When the doctor mentioned my liver, I was in a daze.

I was reluctant to talk to people about my liver because they immediately think that if there’s something wrong with it, it’s to do with alcohol. But this was an infection. The illness had nothing to do with alcohol. The spots turned out to be soft.


Microscopic surgery
After the tests, procedures using ultrasound microscopic surgery were carried out. Tiny perforations were made. I had 12-15 abscesses in the liver. The doctors went for the biggest nodes.

They thought that draining the biggest one might get rid of most of the infection. As it turned out, it released the infection from behind the abscess wall. That was probably the most distressing time I had at the hospital. They tried a second and a third node over a 48-hour period.

The result was that I had three bags hanging out of me for six to eight days. The aim was to drain the infected material.

After the third procedure, I was completely knocked out. The following day, I could barely move. The physiotherapist shuffled me through the unit with an oxygen tent in tow. Between that day and two days later, there was a quantum jump in how I was starting to feel.

I was still out of breath but more independent in terms of what I could do. After that, it was a monitoring process. The bags were removed but only after a PICC (Peripherally Inserted Central Catherer) line was inserted. I’m hoping that will just be for a few weeks.

I’m still only 60 per cent. I have several more weeks of intravenous infusion of antibiotics. I had the option of staying in hospital for another month. But I went for a home care package.

I have to draw blood and I’m a very squeamish person but with the level of training you’re given, it’s something any person should be able to do. If necessary, the nurse can come to your house.


Never been so ill
This is the most ill I’ve ever been in my life. It put 30 years on me and was very scary. I used to have an almost “Green” aversion to antibiotics saying that “the body can heal itself” type of thing.

I think the fact that I hadn’t had many antibiotics through my life meant that when I really needed them, they worked. They saved my life, basically.

The doctors think the infection was the result of a streptococcal bacteria that was generated by being absorbed in the body. It could have been anywhere in the digestive system.

It just transferred to the nearest available organ. I spoke to the infectious diseases consultant at the hospital and she said only four to six people a year present at Cork University Hospital with this condition.

I’m grateful for the level of care I got. I chose to be a public patient. The problem with the HSE is administrative. There’s a middle management layer that slows things down unnecessarily but when you get direct access to the care, I believe the standard of care at the hospital is as good as you’ll find anywhere.

I was never good at looking after my health. I was quite slovenly, I had a bad diet and poor sleep. I’m a wine man. I certainly wouldn’t be in George Best territory but I would have been drinking above the recommended limit. But I’m probably still below the average of what most people drink. I’ll have to make some changes.

By the time the door-to-door phase of canvassing for the local elections comes, I’m hoping I’ll have made a full recovery. My priority is getting my health back.

It’s a male characteristic to think you’re invincible. You never think you’re going to get ill. But sometimes, it just comes out of the blue and catches you unawares.


Dan Boyle is a former Green Party TD and Senator.