My health experience: A marathon run with extra hurdles 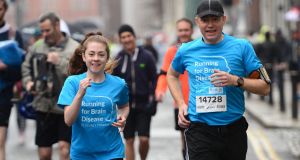 On bank holiday Monday, like so many others, Katie Cooke ran the Dublin marathon. For an 18-year-old girl, this is some feat, but what is even more extraordinary about this teenager is that she has a severe form of epilepsy and throughout the 26.2-mile run, had several seizures.

Katie, who lives with her mum, Nicola, and brother, Will (14), in Cabinteely, has been having regular daily seizures for the past decade but, with amazing stoicism, says she tries to concentrate on the positive side of her life rather than the negative.

“I don’t like to talk too much about all the effects seizures have on my life,” she says. “I could talk about the difficulties, particularly as waking up after having eight to 10 seizures at night is pretty grim and can make daily functioning really hard. But I try not to let it get to me. I have a good group of friends who are used to my seizures and, as I generally have a very quick recovery, we all just get on with it and I make the absolute most of my ‘well’ days.”

As if life wasn’t daunting enough for students facing State exams, Katie’s illness has forced her to curtail her academic path and monitor her medication very carefully as it often doesn’t have the desired effect.

“I have had less than 450 hours of education over the past three years, mainly due to a long-term stay in Crumlin children’s hospital, but I still intend to sit my Leaving Certificate in 2016,” she says. “I currently study at home with a tutor and go into school for a couple of subjects, so I would love to go to university next year as nursing is one of my ambitions.

“But I have to be very careful regarding taking my medication because I have had more than 20 hospital emergencies with continuous seizures. So it can be hard being 18 and having to think of risks all the time.

“I’ve had a lot of trials with anti-epileptic drugs to date and, unfortunately, I fall into the minority of patients who aren’t seizure-free on medications. I also have big sensitivities to some of the great medications for epilepsy and this can cause further difficulties for my treatment.”

The Dublin girl says many people think seizures happen suddenly, but she is often aware of when one is imminent.

“I sometimes get a warning signal before a seizure which is known as an aura,” she says. “Sometimes this can be worse than the actual seizure as I suddenly feel very vulnerable with a sense of somebody coming to get me and this can often go on for hours.

“But other times I just fall over with no warning and, out of the blue, I’m gone. The public are good as people always stop to try to help – but there is nothing for it but to let the seizure run its course.”

Despite the mammoth hurdles she faces on a daily basis, the positive teenager has put all her energies into getting fit and although she has faced many relapses due to running, each time she has picked herself up and carried on.

“I started running a few years back but ended up in hospital pretty much as soon as I started,” she admits. “I also had to recover from mobility issues which resulted in me spending about six months in a wheelchair. So it’s really been only the past year or so that I got back into it again.

“It’s hard to describe the feeling I get after a run, but it’s like I’m 100 pounds lighter and it helps a lot with stress release.”

Katie’s doctor, Colin Doherty, is a consultant neurologist at St James’s Hospital and is also head of the National Epilepsy Programme. He says not only is his patient among the minority 1 per cent of people with severe epilepsy but she is also part of the 1 per cent of long-distance runners in the country.

“Katie is quite remarkable – she has lots of seizures every day as we have yet to find the right treatment to control her epilepsy but she doesn’t let this stop her from achieving great things,” he says.

“She decided to take up running and I first ran with her during a half-marathon in June and again at the Dublin City Marathon last month. She had several seizures throughout both races, each lasting one or two minutes. And every time she came to, she would get back on her feet and get going again. She completed the recent marathon in four hours, despite having seven seizures along the way.

“Katie is such a natural runner and her athleticism amazes me each time we run together – she is truly inspirational.”

Katie and Doherty are not only running to keep fit but also to raise awareness about epilepsy and to raise much-needed funds for the dedicated centre at St James’s Hospital.

“The HSE has been fantastic in providing the extra staff we needed to set up this unit,” says Doherty. “But there really is no money to upgrade the facility, which is an atrocious space at the moment. We need to raise €500,000 in order to bring the centre up to scratch and have the equipment and environment needed to treat our patients.”

Epilepsy – the facts Epilepsy is the most common neurological disease – with more sufferers than stroke.

Epilepsy is an electrical disease of the brain and, in most cases, medication can suppress brain activity.

It claims about 130 lives a year in Ireland.

30% of sufferers are not controlled by medication.

Epilepsy can affect anyone and peaks of onset are early childhood, older child and adulthood.

The National Epilepsy Programme is run by Dr Colin Doherty and there are 26 specialist nurses available to offer care. For more information visit epilepsy.ie