My brothers were inseparable . . . until one died

They shared a room. They shared their friends. Their bond was steadfast, unbreakable 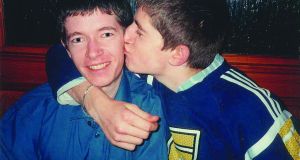 Brian on the left and Tony (who died) on the right.

I had two brothers. They came as a pair. Just under two years separated them, but I can hardly recall a time when they weren’t together. They seemed to do everything together.

The Boys.
“Call the boys for dinner.”
“Watch the boys.”
“Where are the boys?”

They shared a room. They shared their friends. Sometimes, they fought like cats and dogs – physically, viciously and intimately, as brothers can, safe in the certain knowledge that their bond was steadfast, unbreakable.

I’m sure they shared tender moments too. They would have known each other’s soft underbelly. They defended each other. They hadn’t really known life without each other – for good and bad they were brothers, together.

And then the younger of the two died.

I see it like the scene of an explosion

When I picture us remaining four then, my parents, my brother and myself, we are wide-eyed, stunned. A bomb was thrown into our family. I see it like the scene of an explosion. The four of us staggering, covered in dust, ears ringing from the noise, trying to figure out what just happened.

I was living in Australia at the time. My partner came in the door as I waited with friends for him to get home. It was a Tuesday, volleyball night. He said something bad had happened. I tried to keep it at bay, pulled my knees up in front of me and put my arms out to block him. No, what is it, don’t tell me, I don’t want to hear it . . . It made no sense to me, this information. Non-sense. It could not be so, but it was.

I was shielded from the actual event, being so far away. But I had my own shock and my imagination to contend with. Reels played over and over in my head, second-hand versions of events as I tried to make sense of this news. My own personal horror movie, filling in the gaps in the story, ignorantly answering my questions.

I tried to prepare myself for arriving home, seeing my parents. I imagined them meeting me at the airport. Over and over I pictured them crumbling to pieces when I got to them, literally crumbling into two heaps of empty clothing on the floor of Arrivals in Dublin Airport. I was terrified of their grief.

Instead I found them solid, whole, able to offer comforting words and wrap strong arms around me. They were still my parents. And my brother, he was still standing and going through the motions. I could close up my private theatre now. Reality was horror enough, but real people offered real solace.

The car journey was a whirlwind of preparation for what lay ahead of us. While I was up in the air plans had been made. A wake and a funeral. There was a lot to catch up on. So many details – songs, readings, clothing, gifts, who was doing what. How can a memorial for a life be planned in a couple of days? At the time when we’re least equipped to do it?

Arriving back at the house, we encountered a hive of hushed activity. I thought of Emily Dickinson.

How right she was.

The sweeping up the heart
And putting love away . . .

I simply could not contemplate that.

Within an hour or so, my brother’s body was brought home. He looked the same. His hair had its same distinctive smell. My brother was funny, confident, affectionate, mischievous, musical, engaging, full of life and potential. How could this be happening? And yet, why not? Why should it always be someone else, someone else’s family?

The air was thick with sadness, love, grief, compassion

We sat with him. There was music playing, candles lit. People came and went. The house was full to capacity until the early hours of the next day. Family, neighbours, friends, so many young people stunned by this precipitate lesson in mortality. The air was thick with sadness, love, grief, compassion.

My parents’ dignity, their ability to walk and talk and offer comfort to other people, both humbled and reassured me.

The funeral followed the next morning. There was music that my brother had loved, crowds of people. On a chain around my neck I wore a ring that had been his and I was bruised where it pressed against my sternum every time I was hugged. It was cold and sunny, wet and windy. There were clouds and rainbows. Mother Nature herself was disoriented.

We were stunned, exhausted, reeling still. Horrified to be here yet dreading the finality of leaving him behind at the crematorium. Then he’d really be gone from us. What would we do? Could we go home and fall apart?

It was over, but it was just beginning. It reminds me of having a baby, but in reverse. When you’re pregnant you think it’s all about the birth, but the real work begins after the birth and it goes on forever because you are always a parent. We would always miss my brother now, as long as we lived.

So the work began, of adapting to the world without him, adapting to being a family of four, parents of two, brother of one, sister of one. It is a long and painful process, a roller-coaster. You try to help each other through but it’s the blind leading the blind. There was comfort, of course, in our shared grief, but often we sought support elsewhere – friends, therapists. Exposing one’s grieving parent or sibling to yet more despair seems cruel, so I’m sure we all tempered what we shared in order to spare each other.

At the time, we were offered no definitive explanation for my brother’s death. While this was distressing, it was largely overshadowed by the fact of the death itself, and the effort required to process this titanic shift in our world.

Many years later, we were able to conclude that he had a condition called Long QT Syndrome, an inherited electrical abnormality of the heart that can cause sudden death.

We got through it. We’re scarred, but well. We healed individually and as a unit. There have been other deaths, but none so shocking, and there have been births. The births have been a potent tonic, restoring our numbers and fortifying our hearts.

There will be more pain, of that we can be sure. That is the nature of it. I am grateful to be conscious of the pain. It’s humbling. It highlights the good and it reminds me too that we are strong.

It is a cruel and beautiful lesson in acceptance, gratitude, and mindfulness.