60,000 men, women and children fall ill in the wartorn country each year

MSF has recently made two new drugs, bedaquiline and delamanid, available for the first time in Afghanistan for patients with TB so resistant to antibiotics that no other treatment options are available. Video: MSF 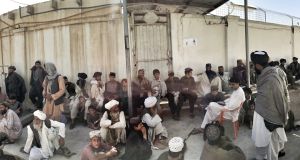 The waiting area at the outpatient ward. Boost hospital in Lashkar Gah, Helmand, Afghanistan, is run by MSF in partnership with the ministry of public health. Photograph: Kadir van Lohuizen/NOOR

In Ireland, tuberculosis (TB) has almost been eradicated. However, worldwide, with an estimated 10 million new cases and 1.7 million deaths each year according to the World Health Organisation, TB is one of the developing world’s biggest killers.

In addition, drug-resistant strains of the disease are on the rise – multidrug-resistant TB (MDR-TB) affects 600,000 people and kills 240,000 annually.

“In an age of gathering technological innovation, it’s shameful that almost two million tuberculosis patients will die this year because they are too poor to treat,” said Joanne Liu, President of Médecins Sans Frontières/Doctors Without Borders (MSF). “Indifference stems from the deadly delusion that TB is a disease of the past. Not so for the 10.4 million people who fell ill with it in 2016.”

Afghanistan has suffered from chronic instability and conflict during its modern history with severe implications for its economy and infrastructure. The country also bears a high burden of tuberculosis disease with an estimated 60,000 men, women and children falling ill and 12,000 dying of TB each year. In order to combat this, MSF has introduced an innovative new drug regimen for multi-drug resistant tuberculosis (MDR-TB), and has recently seen the first patients successfully finish treatment and return home from the MSF clinic in Kandahar.

“MDR-TB can be treated, but it requires real effort from patients and their families. With this new combination of drugs a patient’s chances of success dramatically increase as the course is completed sooner and with far fewer debilitating side effects,” said Aoife Nicholson an MSF laboratory manager who has recently returned from Afghanistan.

Currently, there are more than 20 patients under treatment for MDR-TB at MSF’s clinic in Kandahar, the youngest of whom is just 18 months old. Many travel long distances from other provinces in Afghanistan in order to reach the clinic where they receive proper treatment for drug resistant TB. For some patients, this means a standard short course regimen and for others, those who cannot tolerate the standard regimen or whose TB is classified as extensive drug resistant (XDR), an individually tailored regimen will be created.

“If patients don’t respond to the regular TB treatment as we’d hope, a sputum sample is taken and sent to our lab in Kandahar for further analysis where we test for MDRTB,” said Nicholson. “If testing reveals that a patient is infected with MDRTB it means regular treatment won’t work for them and they’ll need a new specific drug regimen for their case. Their sputum is sent to Antwerp to be cultured and tested against different antibiotics to see which ones will treat it most effectively. This process is repeated for each patient so that their progress can be monitored by seeing how the TB bacteria reacts to the antibiotics.”

“The drugs used to treat MDRTB are quite toxic, so we also perform tests on a monthly basis to monitor the patient’s liver and kidney functions to check for any adverse reactions,” said Nicholson. “It’s a long process but by treating one person for MDRTB the reality is you’re not just saving that person’s life, you’re also protecting their whole community.”

In the project in Kandahar, MSF has recently made two new drugs, bedaquiline and delamanid, available for the first time in Afghanistan for patients with TB so resistant to antibiotics that no other treatment options are available and for those who cannot physically tolerate the standard short course regimen. Far shorter than the traditional 24-month regimen, the short course offers the same or even higher efficacy than the traditional long course, and allows some patients to finish their treatment in just nine months.

“Of course, no one wants to be on highly toxic antibiotics for two whole years, but in Afghanistan the importance of this short regimen is even more relevant because patients are living in a conflict zone. Their futures are uncertain and they just cannot be sure that they will be able to adhere to a long and painful regimen. Daily injections are logistically very difficult and some patients need to stay in our inpatient accommodation for the duration of their treatment. This is obviously a huge interruption in their everyday lives and can put a major strain on their families. Simply put, the shorter and simpler the treatment, the better,” said Tamara Ursini, an MSF medical doctor in Kandahar.

In addition to the specialised treatment, MSF provides patients with social support including food so that they do not become malnourished which is often linked with TB infection, as well as psychosocial counselling and advice on how to prevent the infection spreading to their relatives and friends.

“I got better and now I’m happy, my family is happy. Before I was taking drugs in other hospitals and private clinics but it didn’t work. Here the doctors and nurses have helped me a lot, even giving me the pills themselves with their hands,” said Masouma, the first patient to be discharged from the MSF project in Kandahar after successfully completing her nine months of treatment.

“This short course regimen has never been tried before in a volatile context like Afghanistan, but seeing our first two patients complete their treatment shows that even in a conflict zone it is possible to treat patients for MDR-TB in just nine months. For now MSF is the only provider of this short course regimen in Afghanistan but we really hope that one day it will be accessible to MDR-TB patients countrywide,” says Rodney Miller, MSF Project Coordinator in Afghanistan.

MSF first began working in Afghanistan in 1980 and has been fighting TB for over 30 years. The organisation, which relies on private funding, currently employs 2,300 national staff and 100 international staff in projects across the country. Besides the Kandahar TB project, MSF works in partnership with the Afghan Ministry of Public Health in Boost hospital in Lashkar Gah, in Ahmad Shah Baba Hospital in eastern Kabul and in the maternity of Dasht-e-Barchi District Hospital in western Kabul. It also runs its own maternity hospital in Khost City and two small health facilities in Kunduz.

Want to avoid the wonky first pancake? Here’s how ...
6