Do our hormones influence our financial decisions? A team of researchers set out to find out 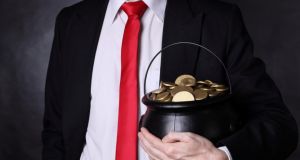 I bought my first hotel when I was 13. Installed in London’s Mayfair, I flaunted my wealth shamelessly . . . then I was jailed. I neither passed “Go” nor collected €200. As life lessons went, the board game Monopoly taught me that being rich fed an appetite to become richer. Around that time, I was both pressurising my father to increase my pocket money, and exuding fusillades of turbo-charged testosterone in all directions.

Might my pubescent thirst for cash have had a hormonal dimension – and could it extend into adulthood?

Dr Eric Stenstrom is a Richard T Farmer-endowed assistant professor of marketing at the Farmer School of Business at Miami University in Oxford, Ohio, and he and his team are trying to better understand how money can affect people. There’s been some research on the psychological effects of money exposure, explains Stenstrom, but none on how money influences physiology.

“Much of my research,” Stenstrom told The Irish Times, “investigates how hormones impact consumer decision-making. With research showing that winning sports games and games of chance boosted testosterone concentrations, we wondered if money might induce a similar hormonal response, and if so, how might these changes impact risk preferences.”

Stenstrom and colleagues – John Dinsmore (Wright State University), Jonathan Kunstman (Miami University) and Kathleen Vohs (University of Minnesota) – aimed to better understand why some people undertake risky, and often detrimental, behaviour, which could help them advise on how to curb undesired risk-taking such as gambling. However, Stenstrom notes that not all forms of risk-taking are detrimental: “If someone is hoping to boost their confidence sufficiently to take a risk that could positively impact their life – perhaps leave a safe job to start a new business – then handling money might help boost their testosterone concentrations and nudge them towards starting that new venture.”

In a recent study in the journal Personality and Individual Differences, Stenstrom’s team reported on “the effects of money exposure on testosterone and risk-taking, and the moderating role of narcissism”.

They set up an experiment in which 104 male students were investigated to determine whether handling and sorting money – 80 $20 bills – compared to just paper, would change their testosterone concentrations and influence their financial risk-taking.

Stenstrom said non-narcissistic men working in the financial sector, and carrying and handling large amounts of cash, could lead to them making riskier financial choices. But he added that, although handling money led to a decrease in testosterone and risk-taking among highly narcissistic men, they were responding to handling money that did not belong to them.

“Narcissists,” explains Stenstrom, “tend to have egos that are simultaneously inflated and fragile. They tend to crave admiration and be viewed as high-status, continually searching for validation to feed their fragile egos. We think handling $1,600 that didn’t belong to them was perceived as a threat to their insecure egos (‘wow that’s a lot of money – why don’t I have that kind of money? Will people think I’m poor?’), which is why we think we observed a decrease in testosterone and risk-taking among narcissists.”

By contrast, he says, “if highly narcissistic men were to hold money that belongs to them, they might experience an increase in testosterone and risk-taking like what we observed among non-narcissists in our experiment. If that’s the case, then we would expect handling money to result in a boost in testosterone and risk-taking among all men, regardless of their level of narcissism. Of course, further research is needed to know for sure.”

And what about the physiological responses of women to handling money? “More research is needed,” replies Stenstrom, “but there’s some research suggesting that testosterone increases can lead to greater risk-taking among women, so it’s possible that women would be affected by money in a similar manner as men. However, that remains to be determined.”

With more financial transactions occurring online, how might one’s testosterone concentrations influence decision-making in relation to, for example, the so-called bitcoin economy. Stenstrom first suggests that, given their findings that handling cash influenced financial risk-taking, one inference is that this could lead to a greater likelihood of purchasing bitcoin and other crypto currencies that are perceived by many as a rather risky investment.

I now have a strong urge to play a game of Monopoly . . . perhaps it’s my hormones.