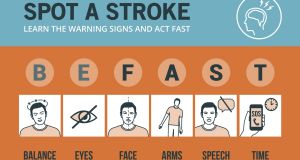 October 29th is World Stroke Day. ‘Brain aneurysms are sometimes called the silent killer,’ says Dr Eleanor Galvin, ‘because very often you don’t know you have one until it is too late.’ Photograph: iStock

The pressure of the pandemic has created a perfect storm for women over the age of 40, putting them at risk of developing a brain aneurysm or stroke, according to Dr Eleanor Galvin. She recognises it as a worrying risk factor for women’s health and highlights the importance of continuing to screen patients and raise awareness of the signs of a brain aneurysm to ensure early detection and treatment.

“The coronavirus is not only a respiratory illness. Research shows it is causing a spike in stroke due to unusual clotting of blood in asymptomatic healthy people,” says Galvin. “The added stress of juggling a more complex home life, along with financial worries, can cause increased blood pressure for women at a time when decreasing oestrogen levels reduces the elasticity of our vascular tissue.

“This, combined with other lifestyle factors such as a reduced ability to attend exercise classes, comfort eating, increased alcohol consumption at home and smoking, all create the perfect environment for a brain aneurysm to develop.”

A stroke due to bleeding in and around the brain accounts for approximately 15 per cent of strokes. Also referred to as a brain haemorrhage or a brain bleed, women over the age of 40 are at a heightened risk of experiencing a haemorrhagic stroke. Galvin, who specialises in women’s medical health and runs her own family practice in Rathfarnham, Dublin, specifies that there are two key factors which can cause brain aneurysms to develop, genetic makeup and lifestyle.

“Brain aneurysms are sometimes called the silent killer,” she says, “because very often you don’t know you have one until it is too late. Women in particular can ignore the warning signs that may present themselves, passing them off as symptoms of other, less dangerous illnesses.

“As a woman in her late 40s and a medical practitioner in a predominantly female patient surgery, I am only too conscious of how important it is to be aware of the signs of a brain aneurysm. In the current environment, we as women and very often mothers, are at an even greater risk of putting our own health and wellbeing behind everyone else’s.”

– Women over 40 are 70 per cent more likely to develop a brain aneurysm than men due to lower oestrogen hormone levels after the menopause.

– Increased stress can cause increased blood pressure creating a greater risk of developing a brain aneurysm and stroke.

– Reports suggest women in Ireland are drinking more regularly at home and have increased their alcohol in a bid to cope with the pressure of the pandemic. High alcohol consumption puts you at a greater risk.

– Women’s increased incidence of anxiety and depression as a result of the pandemic has caused an increase in unhealthy food choices and excess weight gain, putting increased pressure on blood flow and therefore at greater risk of developing a brain aneurysm.

– The reduced ability to exercise during restrictions in gyms and fitness classes has prevented many women from maintaining a healthy level of physical exercise, putting them at greater risk. Worse still, sudden vigorous exercise to lose the Covid-belly increases your risk of rupturing an undetected aneurysm by 250 per cent.

While an unruptured brain aneurysm may generate no symptoms there can be warning signs that there is a danger of one occurring as it presses on brain tissues or nerves. These symptoms can easily be attributed to other issues but should not be ignored. If you experience frequent severe localised headaches, double or blurred vision, pain above or behind the eye and peripheral vision loss, difficulty concentrating or processing information, short-term memory problems, loss of balance or co-ordination or fatigue, it is vital to get screened to ensure early detection and treatment.

“A ruptured brain aneurysm will make you extremely ill very quickly,” says Dr Galvin, “usually producing a sudden severe headache, numbness or weakness in your body, difficulty speaking or confusion, nausea and vomiting, sensitivity to light, a stiff neck or seizure. Not all brain aneurysms need treatment. Some small ones may be monitored for a time instead.

“However, it is important to note that globally, only half of patients with a ruptured brain aneurysm survive and of those that do one in four will be left with deficits. The good news is medical science has advanced so much – you can now have surgery on an unruptured brain aneurysm and recover in 24-hours.”

A revolutionary procedure developed by a former student of the University of Limerick, Dr Stephen Griffin, uses a device that goes in through a vein in your leg and travels to your brain to close off blood flow to the aneurysm. Unlike a similar treatment known as coiling, this new method, now available at Beaumont Hospital and Cork University Hospital, can treat a much larger number of aneurysms of differing sizes and shapes in half the time without risky open brain surgery.

“While coiling represents around 70 per cent of all procedures today,” says Griffin, creator of the Contour Neurovascular System, “other technologies have evolved over the last 15 years to make these interventional procedures faster and treat a wider number of aneurysms where coiling may not be suitable and surgery may present too much risk to the patient. The Contour procedure is fast with most cases done in under 20 minutes and some as quickly as five minutes.”

Thursday, October 29th, is World Stroke Day and minimising our risk of stroke during this highly pressured period is essential, although sometimes out of our control, our lifestyle choices can have an impact on our risk. “Cutting down on our alcohol intake can reduce our risk of stroke,” advises Galvin. “Smoking doubles your risk of dying from a stroke. But the minute you quit, the risk of stroke starts to drop. Being overweight makes you 20 per cent more likely to have a stroke, and your risk goes up with your weight. Being obese puts your risk of a stroke up by 64 per cent.

“If you have a family history or a previous personal history of brain aneurysms speak with your GP about regular screening. Those who have one brain aneurysm have a 10 per cent to 15 per cent chance of developing another one. Making healthier lifestyle choices can help prevent an aneurysm from bursting or even developing. Whether it’s your diet, activity levels, smoking or drinking, it’s never too late to make a change.”