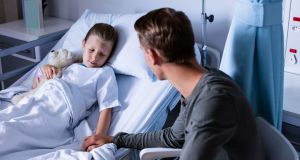 The extent of the non-medical costs incurred for a child needing hospital care vary significantly, according to research carried out by Children in Hospital Ireland – In Childhood Illness, Financial Stress: The hidden costs of hospital care for children – but the main ones include:

Some 72 per cent of respondents had children attending one of the three children’s hospitals in Dublin and for those living outside the capital, travel can be lengthy and expensive. Nine out of 10 were using private cars to make the trips, with public transport regarded as unsuitable for sick children.

In addition to a high consumption of motor fuel, one parent said that, as a result of having travelled 35,000 kilometres to and from the hospital over the previous 11 months, their car had required multiple tyre changes (at a cost of €640 per set) and three car services, “which have varied in cost from €269 to over €500”.

A Dublin-based parent pointed out that even when you’re not far from the hospital, “there’s still an awful lot of mileage with a chronically sick child. There’ve been times when we’ve been in [the hospital] in the morning and then back in the afternoon.” With their child spending 200 nights in the hospital, the “ins and outs” for family members all added up.

Not one of the biggest expenses but car-park charges are regarded as particularly unjustified. At CHI Crumlin, for example, it’s €2.40 for the first two hours, going up to €10 for five to 24 hours. Parents/guardians of inpatients who stay more than 10 days at a time, qualify for a reduced rate of €36 for the first week and €10 per week thereafter.

The average number of nights during the previous 12 months that respondents had stayed away from home in order to be with their child was 45. While the majority slept in their child’s room or ward, incurring no monetary cost, they were unlikely to have had a decent rest.

One social worker contributing to the research said, “the hospital argues that most of the wards have an extra bed beside the child, or at least a mattress on the floor, but for long stays – six, eight, 10 weeks – while a child gets a bone marrow transplant, they need to rotate with another person to keep sane”.

For couples living outside Dublin, one of them may have to pay for private accommodation while the other overnights with the child.

Where a hospital does provide parents’ accommodation, charges range from €10 to €30 per night and there is no yearly cap on the number of nights for which a parent will be charged.

The Ronald McDonald House in Crumlin is one of the best options parents can hope to find in Dublin. However, the report points out that “even a rate of €10 per night can become a significant expense for families on seriously reduced incomes, especially if accommodation is needed for any prolonged period”. Also places here, and at other charity-run centres where there are no fees, are very limited.

One in five of parents who detailed their accommodation expenses had used hotels, spending an average of €144 per night, while three per cent had rented a place and another three per cent had used B&Bs or hostels. In effect, families are living in two places: their permanent home, and temporary accommodation at or near the hospital, the cost of which comes on top of paying rent or a mortgage for their family home.

Almost half of the respondents said when they visit the hospital, they stay the whole day, while another quarter spend between four and seven hours there.  Their partners may also spend part or the whole of the day there too.

Those buying three meals a day, along with coffee/tea and snacks, could easily spend almost €50 on subsistence, and that would be doubled if their partner is with them.

While families are complimentary about hospital canteens, restricted hours and closure at weekends can mean they are of limited use. One parent said that when they could not access the canteen, they had to rely on food from the vending machine, which was very unhealthy.

Food expenses are even greater when a hospitalised child is placed in isolation and their parents are not allowed to use shared facilities.

As one explained: “We cannot bring or store any food in the hospital. This has left us in dire financial stress as we are not even allowed make a cup of tea. All meals must be bought. We cannot use the staff canteen. So, everything is very expensive.

“It’s bad enough having a child with leukaemia but the hospital imposed a huge financial burden on us. Two hundred nights last year in there and we couldn’t even put a microwave curry in the microwave to eat.’

Buying food that sick children find palatable, above and beyond what is served in the hospital, is another food expense mentioned by some.

Childcare for siblings at home is a major issue. Over a third of parents said they had needed evening babysitting, a third used day-time babysitting, almost a quarter had required overnight babysitting and one in five needed extra day care.

Although members of the extended family often willingly step in, parents may feel they need to at least reimburse out-of-pocket expenses and buy gifts in gratitude. There is also the guilt about siblings missing out and, in an effort to compensate, families reckon they spend an average of €42 per week on outings and activities and €20 for physical gifts for their children.

For those without family available to help, the report notes that “hiring a professional childminder whose services are required regularly over the course of months or even years is likely to impose a very significant financial burden”.

As one parent commented: “We have a fantastic childminder but she needed an awful lot of extra paying. She had to do a good few overnights for us. Even though my eldest daughter is in school there were times I needed my minder to come in in the morning and help her get ready and make the lunches and stuff. Childcare costs were massive last year, absolutely massive. We spent about €30,000 on childcare last year.”

One in five respondents said they had needed to seek extra mental health supports to help them cope. Of those who hadn’t, almost a quarter said they could not afford such services even if they wanted them.

Some indicated they had spent well in excess of €1,000 over the course of the year on private mental health services but the average expenditure was €801.

These include laundry costs to keep a child, who may be suffering acute vomiting and/or diarrhoea, in clean clothes. Gifts to help keep the hospitalised child’s spirits up are also a common outlay.

As outlined at the start of the piece, this can be huge for families. In addition to the third who said they had to give up work to look after a child in hospital, others felt the impact through having to take leave of absence, or reduce hours, and/or take less stressful, lower-paid work and missing out on opportunities for promotion. Only two per cent said having a child in or attending hospital had not changed their ability to work.

The effects ripple out to partners who continue to work while trying to keep the family home running and to support the parent spending most of the time in the hospital. They may have to give up overtime, their work performance may suffer and they are also likely to have to take extra unpaid leave, if they can get it.

Overall, more than 50 per cent of respondents described the combination of non-medical expenses and loss of earnings resulting from a child’s illness and need for hospital care as having a “strong” or “extreme” negative impact on their financial wellbeing.

The report concludes with various recommendations on how the financial burden could be eased including: social welfare reform and a new payment to help cover non-medical costs; access to emergency support in cases of unexpected hospitalisation; provision of sufficient and free parental accommodation in hospitals; food vouchers for use in hospital canteens and better access to in-house catering and finally, more accessible and affordable psychosocial supports, including counselling.

Read: Parents spend up to €150 extra per day