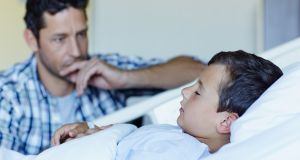 Parents spend up to €150 extra a day when a child is in hospital care and the impact of mounting non-medical costs for long-term stays or frequent visits is laid bare in a report published today.

While we can all recognise the emotional strain of having a child needing hospital treatment, the financial pressures on families go under the radar. But the results of research carried out by Children in Hospital Ireland (CHI) highlight not only the extra costs entailed but also the double whammy of reduced income for parents coping with a child’s prolonged or frequent hospitalisation.

In Childhood Illness, Financial Stress: The hidden costs of hospital care for children, two-thirds of parents report a loss of income. Among those who say they have experienced a reduction in income as a direct result of their child’s illness, the average loss is €605 a week – reflecting how many of the parents have had to leave employment. For those in a relationship, the loss in income experienced by their partner was on average €366 per week.

The birth of a child with a serious neurological or heart condition, or a child’s cancer diagnosis, come out of the blue at what, typically is a very expensive stage of life. The family is likely to have a relatively new mortgage or be paying substantial rent and may have other young children, with all the associated costs, including childcare.

In looking at the feedback from the 300-plus parents who took part in the survey, the CEO of CHI, Anna Gunning, says the thing that struck her most at an emotional level was how they know their children are getting the best of medical help and they feel huge guilt for worrying about the mortgage. They believe they can’t share such a concern with family and friends who, when they ask how the parents are, expect them to reply in relation to the child.

“Housing payments, whether rent or mortgage, is undoubtedly the biggest stressor for them,” she observes. Yet, there is no specific State payment to support parents when their child is in hospital. (The means-tested Exceptional Needs Payment, is a theoretical source of aid for some, but qualifying in practice seems difficult.)

To add insult to injury, the Domiciliary Care Allowance (DCA), the Carer’s Benefit, and Carer’s Allowance – schemes which are key supports for parents of children with long-term additional care needs – are suspended if a child spends more than 13 weeks in hospital, despite the parent needing to be at the bedside as a carer and incurring all the extra costs of being out of the home.

“We can’t say it enough – parents are not [hospital] visitors, they are part of the essential care package for the child,” says Gunning. “If that’s the case, why are they out of pocket?”

If there isn’t a parent at the bedside of a very sick child, it would be considered a child protection issue and the hospital would be on to Tusla saying a parent needs to be there, she suggests. “Yet, those same parents are trying to keep the house running and earn an income. The loss of income is massive.”

This applies right across the socio-economic spectrum and, while there might not be so much sympathy for those in high-paying jobs, it is relative poverty, she points out. The percentage drop in income is likely to be similar, yet they won’t qualify for social protection supports because they are deemed to be in a high-income group. “The whole thing is cumulative; while your child may be sick for two years, it’s a 10-year financial climb out of that.”

The HSE’s National Healthcare Charter for Children states: “Every child has the right to have their parents with them at all times” and this includes “all situations where they need or possibly might need their parents”. However, the CHI points out that the charter does not address the practical and financial issues associated with parents remaining with their children “at all times”.

These are rarely spoken about on behalf of parents, says Gunning, because “those who go through the awful experience just want to forget about it when they come out the other side. You don’t go back and lobby for it.”

In calling for a statutory payment to ease the financial burden, Gunning says that while the CHI has not worked out the finer details, there is a relatively small number of affected families. Yet, for many of those, the impact is huge.

Having last done a survey like this 16 years ago, CHI is presenting policymakers with the new report as an updated snapshot. “We’re telling you this is what parents are experiencing,” she adds.

Voices of parents with children in hospital care

“You get penalised for your kid being in hospital. Anytime my son was in hospital I lost the Carer’s Benefit. I was sleeping on the floor in Dublin, and I was told that was when I didn’t need any support … there are such huge costs when your kid is in the hospital and I don’t know how the Department can’t see that; it’s so obvious.”

“I was on a really good wage but for the first three or four years of his life my son was in and out of hospital so much that I couldn’t keep up any kind of work. We were in the depths of despair about his illness.”

“I remember my husband being given out to by his boss for leaving on short notice on several occasions because our daughter was very ill. They just didn’t get it; to them, her being seriously premature and having complications just meant she had to get a bit bigger and then she’d be fine.”

“Children on chemotherapy can’t use public transport; they certainly can’t use buses. In general, they have to be brought separately from everyone else due to their compromised immune system. Any of the talk around public transport for the new children’s hospital is very amusing to us because it shows a total lack of understanding of what children with cancer require.”

"Nobody thinks about the running of the family home while one or both parents are in hospital with the sick child. All the same bills still need to be paid."

“My son was vomiting up to 20 times a day; I was broke from going to the laundrette by the hospital. I was having to constantly wash and dry clothes to make sure he had something clean for the next time he needed it. Sometimes he’d need the same thing again in the same day – it was that bad.”

Read: The 8 hidden costs of hospital care for children