Lymphoedema: the added pain of trying to get treatment in Ireland 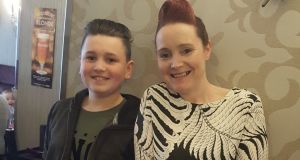 Max Byrne (14) with his mother, Sandra. Receiving a diagnosis was not the end of Max’s problems – the Byrnes found they were very much on their own when it came to finding treatment for Max

A few years ago, Sandra Byrne’s young son Max was in such pain that he begged his mother to allow him to have his left leg amputated.

The youngster, from Leixlip in Co Kildare, is one of about 15,000 people in this country – including about 1,000 children – who suffer from lymphoedema, a debilitating condition that results in painful swelling, usually in the arms and legs, although it can occur in other parts of the body.

Yet, despite the fact that so many people suffer from this debilitating and painful illness, treatment on the public health service is both restricted and difficult to access.

Now aged 14, Max has been having problems since childhood. His mother, Sandra (39), recalls that she first noticed something was wrong when she was giving her then five-year-old son a bath.

“I noticed that his left leg was completely swollen all the way from the top of his thigh to his ankle,” she recalls. She assumed he had fallen and injured his leg.

The GP sent Max into hospital for an X-ray but it showed nothing.

That was the start of a virtually endless series of hospital visits and tests, but by the time Max was eight – at which point his leg had swollen painfully to about double its normal size – the problem had still not been identified.

In fact the youngster was nine years old before he was diagnosed with primary lymphoedema, which affects about 70 per cent of all lymphoedema patients, who, it’s believed, have a genetic predisposition to this lifelong condition.

However, receiving a diagnosis was far from the end of Max’s problems; he and his mother were to discover they were very much on their own when it came to finding treatment for Max.

“The best model of care is for patients to have localised access to drainage, bandaging and compression garments,” says Bernie Traynor, chairperson of support group Lymphoedema Ireland, who says there is no cure or drug treatment available.

Traynor says the treatment (CDT) involves manual lymphatic drainage – a type of massage – as well as bandaging and the wearing of a compression garment on an ongoing basis.

However, once Max was diagnosed his mother was told that although compression stockings would be made available to him, it was up to her to find and pay for the necessary CDT on a private basis.

“I spent six months trying to find treatment. There were no services available and I had no idea where to start,” says Sandra.

She eventually found a private clinic where, she was told, Max needed treatment five times a week costing €80 a session.

On top of this, she had to pay €100 weekly for bandages, plus a hefty taxi fare to and from the clinic, as she didn’t have a car. “It was appallingly expensive. I couldn’t keep it up,” she says. Max’s leg was twice the size it should have been, it was very painful – and it was really getting him down.

His legs started to go downhill. You could see it building back up

Eventually the HSE arranged for Max to go to the specialist Foldi clinic in Germany in January 2018 for a month of intensive treatment:

In the clinic, Max received 24-hour care. He improved in leaps and bounds because he was getting treatment every day, Sandra saw how to bandage both of Max’s legs.

Following the treatment, the clinic strongly advised her to follow up with a therapist in Ireland but when they got home, the situation remained unchanged – Sandra was unable to afford private treatment and, other than the provision of compression stockings, she was still unable to access treatment for Max through the public health system.

It was back to square one.

“His legs started to go downhill. You could see it building back up,” she says, adding that over the years, the condition has led to Max becoming “very down in himself”. At one point, she recalls, he even requested permission to have the leg amputated.

Even though the clinic had warned that the condition was starting to show in his right leg, Max has had no treatment since January 2018 because his mother cannot afford it.

The HSE has now agreed to send him to Germany again this summer, says Sandra. “But what’s the point?” she asks. “There’s no treatment here to follow up with. It’s great over there but, when you come back to Ireland, you’re back to square one. After getting that hands-on treatment there’s nothing here. It’s a disgrace.”

Sandra herself currently bandages the 14-year-old three times a week.

“Max can’t play sports, he can’t walk moderate distances and if he tries the pain gets very severe. He’s in pain a lot of the time and it gets even worse if he gets ill.” On top of that, she says, he won’t wear shorts in the summer and hates doing physical education at school because of his embarrassment about his legs and the compression stockings.

The HSE recognises the need for services, and has developed a model of care for the treatment of lymphoedema, but there’s still been no definite commitment to the provision of a nationwide network of co-ordinated services, complains Ms Traynor, who points out that more people suffer from lymphoedema than from multiple sclerosis or Parkinson’s disease.

“Treatment for either form of lymphoedema is very difficult to access on the public health service,” Traynor says. While compression garments are available for children with the condition, they are not receiving CDT through the public health service due to lack of resources. Private registered therapists who treat children are available but this is expensive, given that ongoing treatment is required.

“For the past five or six years we’ve been advocating that services for lymphoedema patients be put in place in the public health service,” she says, adding that although the model of care is now in place, very little has happened in terms of the provision of treatment.

Dr Rosemarie Watson, consultant dermatologist at the children’s hospital in Crumlin, oversees a specialised vascular clinic with a multidisciplinary team.

This clinic serves children with a number of conditions including lymphoedema. However, it only takes place once a month and has long waiting lists; and, says Dr Watson, she’s not aware of any other specialised clinics in the public health service looking after children with lymphoedema. The vascular clinic provides diagnosis and education about the condition, and fits children with compression garments, which come free to the patient.

It is estimated that putting an effective lymphoedema care service in place would free up some 15,000 hospital bed nights a year

While treatment for lymphoedema is not routinely available for children on the public health service, the hospital has made representations to the HSE to provide it for children with lymphoedema whose parents cannot afford it privately. However, Dr Watson says, accessing such treatment can be “challenging” depending on where a patient lives. Services are very limited for children with lymphoedema, she says, adding that the clinic also refers to centres of excellence abroad when necessary. “However, ongoing support is needed post-discharge from these centres,” she emphasises.

According to Ms Traynor, it is estimated that putting an effective lymphoedema care service in place would free up some 15,000 hospital bed nights a year as a result of patients suffering complications linked to the condition.

“This is the bulk of the hospital trolley crisis, and, based on international comparisons, it’s also estimated that such a service could save the health system millions of euro every year,” she says.

“However we have received no timescale for the rolling out of the service and no commitment in the HSE budget for such a service. We’re very concerned that this situation will just be left on the shelf.

“The treatment we’re looking for has been in place internationally for 30 years and is tried and tested. We want it to be rolled out nationally – as soon as possible.”

Read: The pain was so bad I wanted to chop my leg off