Give Up Yer Aul Screens: Devices may be everywhere, but they don’t have to take over your summer 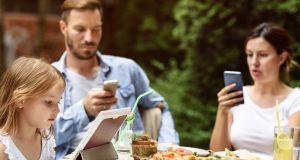 Can we reduce the amount of family time we spend on screens this summer? Well, we can try. Photograph: iStock

On the last night of a recent family trip to Kerry, we went to O’Shea’s pub and restaurant in Sneem for a family dinner. My twin daughters, aged 10, had brought along the usual bag of tricks to keep us entertained while we waited for the meal.

We had the trusty tin of Dobble – probably the most portable and reliably fun game for all ages I’ve ever come across – some colouring pencils and paper for fiercely contested drawing contests and a deck of playing cards.

The cards had been specially chosen because their grandmother, who was with us, has age-related macular degeneration and can only see the numbers on a plain deck of cards. We had a quick look at the menu – O’Shea’s are famous for their burgers and steaks – and then began a round of our current favourite card game 99.

When the waitress came to take our order she couldn’t help remarking on the family tableau which, in hindsight, must have appeared to her as a scene from another, much simpler era.

“Oh,” she said as the cards were shuffled and dealt. “It’s just we don’t have many families sitting at dinner without their screens”. I looked around and noticed the low glow around the restaurant from various devices at almost every table.

Meal times are where we check in with each other the old-fashioned way, telling stories or sharing daily triumphs and disasters

I remembered dinner in our hotel the night before when a small girl, the only child at a table of adults, spent the entire meal with headphones on crouched over an iPad and a barely touched bowl of spaghetti. And another meal out with the kids and their cousins, where I watched a man walk around the restaurant with a baby boy in his arms, his phone carefully positioned in front of the infant’s face.

The waitress’s comment made me sad. Not “I can’t eat my sirloin steak with a giant side of onion rings, I’m so upset” level sadness, but I couldn’t stop thinking about it. Even after we’d gone home and unpacked the bag of tricks I was imagining all these opportunities for family engagement being denied by devices at dinner tables.

I should probably point out that I am not trying to humblebrag my way into a parent of the year award here. My no-screens at meals, whether at home or in a restaurant began, initially, as a performative thing.

I’d have been embarrassed when out for a family meal, wary of being judged by strangers thinking I fobbed my children off on phones or games consoles. So a family rule was born . It is now so ingrained that even if I try to check my email during dinner at home or in a restaurant, I get a telling off.

Meal times are where we check in with each other the old-fashioned way, telling stories or sharing daily triumphs and disasters. When we go out for dinner we bring the bag of interactive tricks along to add to the occasion.

I’m no screen-free saint though. Away from meal-times, I am more than happy for my kids to watch Zumbo’s Just Desserts on Netflix for the 743rd time when I need a bit of peace. The iPad has often been a reliable co-parent over the years. But like most parents and guardians I worry about relying on too much on screens and am always on the look for alternative activities.

Which brings me to the reason for this new Irish Times summer series. I’ve called it Give Up Yer Aul Screens in a nod to that wonderful Oscar-nominated Irish animation short and TV series by Brown Bag Films Give Up Yer Aul Sins. Over the next few months, as part of our Summer of Family initiative, Irish Times journalists with children of all ages will be writing and sharing their own tips for reducing screen time.

My hope is that it will give anyone who feels they are losing the battle against Fortnite and YouTube and Netflix some inspiration around how to manage the issue and have more family fun along the way. We want you, our readers, to get involved too. Tell us your experiences and ideas here.

Screens may well be a fact of modern family life but who says they have to take over our lives? If you’d like your family to be left to their own devices a little less this summer keep an eye on Give Up Yer Aul Screens which runs until August 20th.

Get involved with Give Up Yer Aul Screens here