Living with an invisible condition 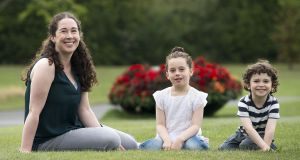 Sarah O’Connell with her children Jake (3) and Hayley (7). Photograph: Dave Meehan for The Irish Times

What do you think of when you hear the word “disability”? All across Ireland, thousands suffer from conditions that can be invisible to others, such as Crohn’s disease, cystic fibrosis, arthritis and chronic fatigue syndrome. Many feel stigmatised and not fully understood.

Sarah O’Connell (33) from Cabinteely in Dublin, was diagnosed with chronic fatigue syndrome (CFS) when her first child was two years’ old, just a couple of months into starting a new job as a business analyst.

That Christmas, she was struck down with the winter vomiting bug, which was followed up by a bad throat infection.

“I was going back and forth to the GP every couple of weeks or month and saying: ‘The sore throat’s still coming and going, I feel exhausted all the time, I don’t feel like myself.’ And initially they felt it was kind of a post-viral fatigue, which can happen after a nasty infection. I was a mother and I was working-full time, you know yourself.

“After the six month mark hit and it was summertime, they said it might be more something like chronic fatigue syndrome, which was the new name for ME.”

O’Connell says her direct manager was “very good about it”. “She said she knew somebody who’d had something similar, she was very understanding. My manager above her who led the department, she never said anything critical but I remember her stopping me and saying, ‘What is that?’ and trying to explain. Having that pressure and feeling like, ‘I can’t explain this properly, and people don’t know what it is, they think it’s just being tired’. It’s not tired in a way that any healthy person is. It’s a totally different type of fatigue.”

Initially, O’Connell tried to stay in her job, but she felt she couldn’t perform effectively. “For me, it was more based on the cognitive problems I was having with CFS,” she says.

“Physically, I’m not going to lie, it was hell. But my mentality is just to keep pulling yourself up every day. But then it got to the point where I would find myself at my computer, I’d be looking for a file, and I would forget what file I was looking for. I would be in a meeting, and I would totally lose my train of thought with six or seven people who are all your seniors staring at you. And I just realised, ‘I’m no longer mentally able to do the job I’m being paid for, it wouldn’t be fair’. Just that feeling that I was going to get discovered. It’s embarrassing, I guess.”

“When someone mentions ‘physical disability’ the normal response of most of us is to picture someone in a wheelchair or with a guide dog,” says Philip Watt, chief executive of Cystic Fibrosis Ireland. “Living with a long-term but less ‘visible’ condition comes with a range of challenges that may not be immediately apparent to both policy makers and to the general public.”

Jonathan Fitzgerald is 23 and lives in Limerick City. He was diagnosed with cystic fibrosis, a condition that affects the lungs and the digestive system, when he was 12 weeks old.

“I’ve never known anything different. It’s second nature now,” he says. “But I’ve picked up two other conditions along the way. They’ve rocked me now alright but you just take it on the chin and keep going.”

He was diagnosed with Crohn’s disease in 2010 and as pre-diabetic in 2012, conditions that are both a result of the effects of his cystic fibrosis. He has had long stays in hospital due to illness and surgery over the years, including being forced to do his Junior Certificate exams in hospital.

Fitzgerald needs to use nebulisers each morning to loosen up the phlegm in his system, and to take protein supplements and digestive enzymes throughout the day.

He currently works part-time hours at a Carphone Warehouse, a job he really enjoys. “My manager and assistant manager are actually fantastic. They know the condition, they know everything with me. They’re outstanding. If I need five minutes to go in and catch my breath, they’re great for stuff like that. I have a day off every week for my physio and it changes every week so they’re very accommodating.”

Prior to this, Fitzgerald worked for a fast-food chain, where his experience was not quite as positive. “It started off fine,” he says. “My manager didn’t really understand the condition. He kind of just assumed I was fine in a way, I think. I was getting extra hours that I didn’t ask for. This would’ve been my first proper job. I tried to explain to him, but he kind of just nodded his head and said, ‘Yes, I understand’, but he was more focused on the business than anything else.

“I’m on a lot of protein supplements and stuff and I was meant to be taking the supplements every few hours. Every time I eat, I have to take enzymes with food. I remember it was coming up to Christmas and I did a 10-hour shift and an 11-hour shift one day after another with no breaks. And I was like, ‘I’m not doing this ever again’. It was rough.”

What does he find hardest when it comes to explaining his health issues? “If someone hasn’t got experience of knowing the condition, it’s very hard. People just throw questions at you sometimes and I kind of feel, ‘Just let me explain when I’m ready’. Some people can be a bit forthcoming with it. You know, ‘What’s wrong?’ ‘What’s this?’ and you’re kind of like, ‘Look, just back off and give me a bit of a space, like’.”

Darragh Burke (45) from Wicklow knows that feeling all too well. He was diagnosed with rheumatoid arthritis 19 years ago, aged 25.

“People said things like, ‘Oh sure you look great, a young lad like you wouldn’t have arthritis. That’s for old people.’ They presumed I wasn’t sick. I wasn’t missing a limb, I didn’t have my arm in a cast. And that was the general stigma with it, no matter what way you gloss it up.”

After the rapid onset of arthritis, Burke was forced to give up his work as a carpenter and builder, and eventually became a stay-at-home dad to his two young sons while wife Louise went to work.

“Things were stressful at home,” he confesses. “It’s only when you think back you see how much Louise had done and wonder how she coped – a new baby, me being sick, a mortgage to be paid, a wage less coming into the house. But she did.”

By this point, arthritis was affecting “every joint” in Burke’s body: “Your jaw would lock up, or your hands would cramp on your knife or your fork. Head to toe, I was totally affected.

“She had to help me every day. Get me out of bed, help me into bed. Set me up for the day on the couch, whatever had to be done before she left. She was my carer really for the first two years, and then she went back to work then when I improved.”

In 2013, Burke started a work placement at a construction safety company in Athy, Co Kildare, as part of an employer-based training course. He still works there today on a part-time basis. “It helps to have a boss who understands that living with arthritis is a tough one with ups and downs,” he says.

Although his condition has improved significantly since he started an injected medication called Enbrel in 2007, Burke still faces a “daily battle” in managing his arthritis.

What would he say to people who are dismissive of conditions that they can’t see? “Don’t be so ignorant about what it is. Research it, look it up and see what the problems are. Not everything is visible.”

How TikTok turned my five-year-olds into proto-teens
5