Christmas in September: family and neighbours swing into action for sick child

Decorations, cards, presents and Santa for boy isn’t expected to live until Christmas 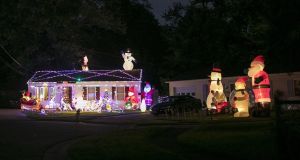 Five weeks ago, Brody Allen’s parents were told that their two-year-old son’s rare form of brain cancer meant he had two months to live.

The boy’s family realised he probably wouldn’t be able to enjoy one more Christmas, so they decided to celebrate early, putting up a tree and decorations.

“In his mind it is just Christmas,” said McKenzie Allen, (21), Brody’s sister. “He woke up one day and the Christmas tree was out. He doesn’t know it isn’t really Christmas. He is just enjoying it.”

Brody’s health has deteriorated so that he no longer has the energy of a toddler or the use of his left arm and left leg. He likes to be outside, so he often sits in a little red trailer, a blanket thrown over him and a hoodie pulled over his head, while his siblings pull him around their neighbourhood in Colerain Township, a suburb of Cincinnati, Ohio.

There he can see an inflatable Minnie and Mickey Mouse, a snowman, Santa Claus and a Christmas tree on the yard of Barbara Elliott, a neighbour whose home is one of six in the Allens’ cul-de-sac that has been decorated for Brody.

“I offered Ms. Allen some pull-ups that I had for my grandson who is not potty trained, and she said they weren’t going to bother with potty training Brody, because he had cancer,” Elliott, (74), said, describing what she had heard from Brody’s mother.

“It broke our heart,” Elliott added, her voice cracking. “So I said to my husband, ‘We got stuff, let’s decorate’!”

Brody’s family first learned he was sick after he complained in May about being dizzy; a doctor said it was probably an ear infection. The family was sent to Cincinnati Children’s Hospital Medical Center for further tests, which revealed that Brody had four embryonal tumours with multilayered rosettes.

“One on his lower spine, one intertwined with his brain stem and two behind his pons,” McKenzie Allen said. “It is extremely rare,” she said. “It doesn’t respond to treatment very well.”

His father, Todd Allen, (45), said it was “a very aggressive brain tumour that he had from birth and we had no idea.” He added, “It was in him all along, just a part of who he is.”

The hospital, which has helped pay medical bills that Medicaid does not cover, gave Brody the most aggressive chemotherapy treatment it could.

It was not effective.

One of Brody’s tumours grew by 30 percent, and he developed a fifth tumour in his brain. Using radiation to treat the tumours was not an option because Brody was too small. “It would just end up hurting him,” Todd Allen said.

There were no other options for Brody. So the family set out to keep him happy.

“They tried to treat and it failed, but they gave us a family,” Todd Allen said. “Those nurses and doctors loved on Brody like no one else. They are just part of our family.”

The Allens settled on having Christmas in September for Brody, but soon realised they needed more decorations. There aren’t many for sale in September, so they started a Facebook page called Team Brody and asked neighbours for help. “I was willing to buy the decorations from them, but so many were donated,” Todd Allen said.

Ryan Simpson, (34), who said he is known as “the Christmas guy” among friends, was tagged in the Facebook group. “When I showed up, I really did not know what I was getting myself into,” he said.

Simpson appeared at the Allens’ door with a plastic tote filled with lights and decorations, and helped the family decorate inside and out. “When I showed up that day, Brody was outside in a red wagon, and his sister was pulling him around,” Simpson said. “I handed him a little gingerbread house with gumdrops on it, and it kind of spoke to him.”

Simpson went back to the house to add more decorations four days in a row. He also helped neighbours decorate their houses.

“My next-door neighbour, who only speaks Spanish, took down all her fall stuff and put up snowflakes and poinsettias, and did garland on her fence and lights,” McKenzie Elliott said.

“When Brody saw it, he couldn’t believe it,” Simpson said. “He has been very animated.”

People have also sent Brody gifts and snacks. He has a feeding tube, but he likes licking the sugar off sour straws and sipping blue Gatorade. “We got 25 Christmas cards yesterday,” McKenzie Allen said.

The community is now planning a Christmas parade for Brody. “We needed to get involved because he lives in our neighbourhood,” said Amanda Beckman, (34), who reached out to the Facebook group. “We just wanted to do something to make this really special for them, because they are going through a hard time.”

The parade is scheduled for September 23rd and will feature Santa Claus in a fire truck, carollers and superheroes. Some people just want to drive their cars in the procession. “Everybody wants to be a part of it,” Beckman said.

Brody has good days and bad days, but with these efforts, he has a lot of good moments. “It’s emotional because I know this will be his last” Christmas, said Brody’s mother, Shilo Allen, (41). “It is really hard, but I love seeing the joy in his eyes. We did it to make him happy.” – New York Times