Life as a sex addict: ‘I thought I’d be better off without a penis’ 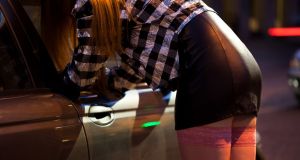 David: “I would come out of a sex worker’s place and be straight on my phone searching for my next encounter. There was no satisfaction.” Photograph: iStock

He didn’t tell anyone.

“Looking back on it, I was hyper too, which didn’t help. Now they might call it ADHD. Things have changed a lot, but at the time I had no skills or knowledge about how to deal with it,” he says.

When David was seven or eight, he would self-harm and then pick at the scabs left on his body. The pain distracted him from the anxiety at home and the bullying at school. He says he felt “very isolated”.

Sexual addiction was an addiction that came easily to David. He grew up isolated, bullied and struggling to make relationships, particularly with the opposite sex. He would be in his 30s before he got a girlfriend.

That sex is everywhere, selling products from washing powder to cars, did not help David to stop his addiction to thinking about sex – all day, every day. Statistics from the Society for the Advancement of Sexual Health in the US led the organisation to think that between 3 and 5 per cent of the population could meet the criteria for addiction to sex.

“People think that sex addiction started with the internet, but it didn’t,” says David. “You can be addicted to sex in the same way you are addicted to cocaine.”

He went to college after he finished school with the Christian Brothers, “who were not known for dealing well with sexuality”, he says, but he still hadn’t lost his virginity and was getting anxious, thinking his peers were laughing at him. David had not had a girlfriend; in fact he had not had a relationship, so he decided he would visit a sex worker in Dublin, away from where he lived.

David visited a sex worker and had sex, but the sex wasn’t what made the greatest impression on him. “She held my arm as she spoke and said some nice things to me. She told me I was good person and no one had said anything like that to me before.”

Now everything would be okay, he told himself. Except that it didn’t feel ok a lot. He carried on having sex with sex workers, but as soon as he had left, he was thinking about his next encounter.

He felt terrible. He even came close to castrating himself.

“I got the knife and I only stopped when I realised that I would bleed to death before I reached the nearest hospital. I didn’t want to carry on facing this problem and I thought that sex was the problem and my penis was the driving force. I really thought I would be better off without it.”

It would take another 13 years for David to get help.

First, his work would take him overseas, where he would spend hours trawling the internet looking for sex workers. “I managed because I was good at my job and got it done quickly to allow me time for my other activities, namely spending up to 14 hours every day looking for sex.”

His addiction cost a fortune. He thought he would grow out of it.

“The anxiety of being me and my whole obsession with sex,” became too much. David would try to take his own life twice. “After my failed suicide attempts, I knew I had a problem with sex and got an appointment at the Rutland centre. They agreed and two weeks after my initial consultation I began a five-week stay there.

“I knew I had a problem and I had become an expert in lying and manipulation to hide it,” says David. He was the only sex addict in the south Dublin centre at the time, “but I consider all addictions to be rooted in the same things. I just needed to stop the pain.”

David is happy now, not deliriously so, “normally” so, which is what he wanted. He is in a relationship and is not interested in revisiting his past. “When a sex worker rang me to see where I had gone, I was actually upset and told her not to call me again and to delete my number. I was upset, but I was able to handle it.”

Stopping feeling anxious was the key to recovery for David. When he stopped being anxious, he stopped thinking that he could use sex to self-soothe. He knew he was useful, not useless.

He has changed careers and jobs, enjoys his relationship and has stopped being afraid for the first time in three decades.