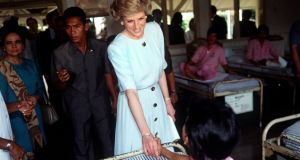 In addition to losing limbs, sight, or even life, patients were shunned, banished, or removed from their communities.

Writing in 1954 about his experiences treating leprosy in Malaysia, doctor and broadcaster Michael P O’Connor remarked: “There is no doubt that the horror with which it has been regarded down the ages was solely due to the outward disfigurement . . . nor is it very contagious, in spite of all we have heard about touching a leper. It is far more difficult to catch, and a good deal less fatal, than pulmonary tuberculosis.”

Leper hospitals were a necessity across Ireland from the middle ages, but by the time this paper began publication 160 years ago, leprosy was described as an “extinct disease”, though it was still much misunderstood.

“This disease appears to have committed some fearful ravages in Ireland about 120 years ago,” explained one article in September 1861, recalling that Member of Parliament Dr Moluyneaux “had attributed the disease to the quantities of salmon consumed by the peasantry, while in a sickly state during the spawning season . . . the Irish Parliament hastily passed a law, inflicting heavy punishment upon any person found killing salmon out of season.”

Bulletins appeared about leprosy in West Africa, India, Barbados, Russia, the South Sea Islands, and Canada, but it was also still present in Europe. In 1877, 116 cases of leprosy were treated in Valencia, Spain, and in 1879 a leper ward opened in London.

Describing one colony of lepers in 1885, a Constantinople correspondent wrote: “I saw numbers of beings sightless, their faces distorted out of all shape, their hands and toes having dropped off, their voice gone, breathing with desperate effort, their skin peeling off and black as that of a mummy, insensible to pain when pricked in certain parts of the body. Their feet and flanks are covered with horrible sores, through which what is left to them of life ebbs away . . . And yet amid all these horrible scenes there live married couples and children, the latter of whom, free from disease as yet, play about like other children.”

Many 19th century doctors believed that leprosy was hereditary, until the discovery of the leprosy bacillus by Armauer Hansen restored, according to an article in October 1898, “the old view of its acquirement by contagion”.

But regardless of contemporary medical theories, even unconfirmed leprosy cases incited fear. In July 1889 there was panic in New York’s Chinese quarter following reports that “a Chinaman who has been living in one of the great east side tenements” had the disease. “The Chinese are in such terror of him that they are afraid even to touch his money or gamble with him, which is saying a good deal, but from fear of the authorities the man’s friends have succeeded in hiding him thus far.”

In May 1890 the “Samaria” arrived at Queenstown, carrying Swedish woman Corloth Lindholm, who had been isolated in a stateroom when it sailed from Boston: “the sanitary authority there discovering that she was a leper refused her permission to land . . . The passengers who landed here say that the parting scene between the afflicted woman and her husband and children at Boston previous to the sailing was most affecting.”

The disease also continued to make appearances here. In 1891 the guardians at Lisburn Workhouse were informed that the Hillsborough Linen Company had given notice to a leprous worker and his family to leave their home. According to the medical officer, though there “was little risk from contagion”, the family were boycotted. “There was a great deal of unnecessary alarm in the neighbourhood and . . . it was almost impossible for the poor people to obtain necessary food.”

Nineteenth Century readers, meanwhile received regular updates about one particular colony, Molokai, in Hawaii, and the work of its Belgian priest, Fr Damian. A fellow priest, sent to Molokai when Damian himself succumbed to the disease, wrote in 1888: “I don’t think it can be avoided if it is contagious by contact or by inhalation, for any one who lives among them comes in contact with them in a thousand ways . . . The disease has a particular smell, very offensive. In the beginning the sight of poor Father Damian, whose ears, face, neck and hands are quite bad, was enough to take my appetite away . . . ”

Following his death the following year, readers contributed to a memorial cross in his honour. He was canonised a saint in 2009.

Twentieth century patients were also forced into quarantine. According to an article in 1949 headlined “Danger to Whites”, “more than one in 30 of the Aboriginals in northwest Australia are lepers”. The natives, who knew leprosy as “the big sick”, “race out of sight as a plane lands on a station airstrip, for fear it brings a flying doctor to take suspects to the leprosarium”.

Purported cures included the ubiquitous Holloway’s Ointment. In May 1890 “Father Mullen of the Jesuit’s College of Bangalore claims to have cured several cases of leprosy by Count Mattei’s system of electro homoeopathy.” And while Dr Charles-Édouard Brown-Séquard was acclaimed for his medical advances, a sceptical reaction from fellow scientists was reported in 1890 to his assertions that injections of his solution could cure leprosy.

Initially more promising, but painful, were accounts of treatments with Nastin – a fat extracted from the microbe responsible for the disease – and injections of oil from the chaulmoogra nut.

Leprosy is now curable, largely thanks to the group of Irish scientists, led by Dr Vincent Barry, who were tasked with finding a cure for tuberculosis in the 1940s. Articles in 1953 noted that one compound had unexpectedly proved effective against leprosy “and is being used in Nigeria, the Congo and Fiji”. Trials continued, and the drug, clofazimine, was adopted worldwide. It is still used in the multi-drug therapy for leprosy patients today.

Over the past 145 years, much of what Irish Times readers have learned about leprosy, and its stigma, has come from one charitable group, founded by Irishman Wellesley Bailey and his wife Alice after they witnessed the extent of suffering from leprosy in India. In 1874, The Mission to Lepers began lectures to raise awareness about the disease, and fundraised to care for people affected. By 1964, one report noted there were 10 million sufferers worldwide, but only 20 per cent received treatment, and the organisation was now working in 20 countries.

Now known as The Leprosy Mission, its work is, unfortunately, still necessary.

Conor Pope: At 19km/h, I have never felt less like an athlete
9