‘Leaving the oncology ward, I wondered what I was going to do with myself’ 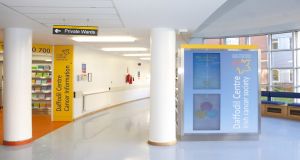 The Daffodil Centre in St James’s Hospital, Dublin, is one of 13 such centres across the country which have helped 300,000 people since 2009

When William Wordsworth penned his famous words “I wandered lonely as a cloud”, he couldn’t have imagined that the flowers which brought such joy to a lonesome soul would one day be the symbol for a charitable organisation which aims to help, support and comfort people during what is often one of the lowest points of their lives.

The aptly named Daffodil Centres around the country are celebrating their 10th anniversary this year and thousands of people will have benefited from their solid presence both during and after a cancer diagnosis.

The cancer information hospital-based centres are open to anyone affected by the disease and offer support, advice and a listening ear to those who need it most. The first centre was set up as a pilot in collaboration with University Hospital Galway and from the get-go, the main objective was to put clear information, care and support at the very heart of a cancer patient journey from diagnosis to treatment and follow-up.

There are now 13 centres across the country and 300,000 people have been seen since its conception in 2009.

Alan Rushe is just one of the many patients who have benefited from a Daffodil Centre as last year he was diagnosed with bowel cancer after suffering from some “vague and unsettling symptoms”.

“In April, 2018, I started to get an odd feeling in my stomach – it wasn’t cramp and it wasn’t pain, more like a bit of a discomfort,” he says. “I knew something wasn’t right so, after a week, I went to see my doctor who thought I might have been suffering from irritable bowel syndrome and gave me some tablets to try and clear it up.

“A week later, I still felt the same so I went back to the doctor who said I should go for a colonoscopy, just in case. I had never been in hospital before in my life and I’m not afraid to say that I was really freaked out by the prospect. But as soon as the doctor said he was going to give me a little injection, I didn’t remember another thing and the next thing I knew I was lying in the hospital bed and it was all over.

“A friend came to take me home and when the doctor came round and told me that there seemed to be a tumour in my colon, my friend went white. But I just asked if it could be operated on and said I wanted it done as soon as possible – I just wanted it over and done with.”

The Galway man was referred to another specialist in order to undergo surgery to remove the tumour – and from there his physical recovery began. “The tumour was removed during a two-hour operation and while it was a bit more complicated than they had originally thought, it was self-contained which was very good news,” says Alan.

“I spent a week in hospital on epidural, morphine and pain killers and didn’t know what planet I was on. After that I was kept in for another week and didn’t eat a thing as I think my body wasn’t ready for it. The nurses were a bit concerned, but the doctor assured me that it was okay to wait until I actually felt like eating. He also told me that I was incredibly lucky and if I had left it for another few weeks, things might have been very different.

“I know a lot of people, especially blokes, are prone to ignoring medical issues and putting up with a bit of pain, but I would really advise them to go to the doctor, because if it turns out to be cancer and is dealt with straight away, then they will stand a much better chance. And because I sought medical advice fairly quickly, I was discharged at the end of June with the instruction to recuperate until my chemotherapy sessions began in September.”

The 60-year-old began a six-month chemotherapy course and at the end of February 2019, his cancer journey was all but over – however, while the disease had been eradicated from his body, he was in need of emotional support – and this is where the Daffodil Centre came in.

“When I was leaving the oncology ward after my chemo was over, I got a big hug off the nurses and I wondered what I was going to do with myself,” he admits. “My body was wrecked, I was utterly exhausted and after sitting around for six months, I was very unfit. I was also feeling very down – despite knowing it was all over – and one of the nurses told me that I should check out the Daffodil Centre.

“I remember thinking that I needed someone to talk to – she said they were very nice down there and would be available to chat – and that is what I needed, because although the nurses and doctors who looked after me were absolutely fantastic, they are so busy that they don’t really have time to spend talking to people. So I decided to check it out and right from the start I felt at ease.

“I met the nurse who first welcomed me on to the ward at the start of my treatment and this was great as she was so nice and welcoming. I felt immediately like it was a place of support and somewhere I could go if I just wanted to talk – and I was right.”

Usually located inside a hospital, the Daffodil Centres are stocked with leaflets offering advice on every topic which may affect cancer patients or their loved ones – from information on how to cope financially when you are not able to work and how to tell your children you have cancer to advice on diet, exercise and mental health (for more information, call the Cancer Nurseline on Freephone 1800 200 700 or log on to cancer.ie).

And alongside this expert advice, visitors to the centres can also meet others who are in a similar situation – this, said Alan, is an invaluable part of the service.

“The Daffodil Centre is a vital part of cancer recovery,” he says. “It is the link between finishing chemo and getting back to normal life. I found great support from everyone I met in there and would have been absolutely lost without them.

“But alongside all the nurses and expert advice, I also met people who have been through cancer and found it very helpful to be able to relate to them and talk about symptoms or side effects we had in common. It was through the centre at UHG that I was referred to Cancer Care West which also has been a fantastic help and I go there every Monday for an hour and a half to chat to people, get advice on diet, exercise, building the body back up and even tips on rebuilding relationships.

“This sort of emotional support is invaluable and I still drop into the Daffodil Centre whenever I am in the hospital. I said to one of the nurses there recently that I used to really hate going in for my appointments and treatment until I found the centre and now I actually look forward to it as it is somewhere I feel safe.

“They do an amazing job and I would advise anyone who has been diagnosed or been through cancer – or even someone whose friend or family member has – go to their nearest Daffodil Centre for support, you will always be welcome.”