Learning to live with visual impairment from inherited disorder 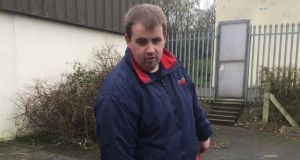 Patrick Cotterell got involved with the Fighting Blindness charity which hosts a technology meet-up each week for the visually impaired.

Patrick Cotterell was diagnosed with retinitis pigmentosa (RP) when he was eight. His older brother drew their parents’ attention to the fact that Patrick was falling over things. “It was a heavy blow to my parents when I was diagnosed. During the day, I didn’t feel anything was wrong, but night time was a problem,” he says.

RP is a rare genetic disorder which results in the gradual loss of peripheral vision. Cotterell went to his local primary school in Co Kilkenny and then for two years to secondary school in nearby New Ross before transferring to St Joseph’s School [Now Child Vision] in Drumcondra to complete his education.

“Going to school in Dublin was great for my independence. We went out to the shops and the cinema and we were taught how to cook. Having all the amenities nearby helped a lot,” he says.

After school, Cotterell did a computer and network maintenance course at Waterford College of Further Education. However, his sight began to deteriorate further and he found he couldn’t work in this area. Instead, with the help of his father, he rented 12 acres of land and started to rear sheep and calves. “I have 32 sheep and two yearling calves. I plan to get more. I love being out in the fresh air and listening to nature. It helps you not to think about yourself,” he says.

As well as RP, Cotterell has Laurence-Moon-Bardet-Biedl Syndrome, another rare condition which can lead to other health issues. “I was slow to walk and talk and I’ve battled with my weight since I was six or seven so I’ve got to look after my health,” he says.

Cotterell has also suffered from back pain, not least because of all the falls he has had over the years due to loss of peripheral vision. In 2018, he had surgery to remove a piece of disc in his lower back to deal with recurrent pain in his legs and bottom. His aim now is to find a physiotherapist who will give him an exercise programme to improve his mobility.

Unsurprisingly, his mental health has suffered too with the strain of dealing with these physical health problems. “In January 2018, things came to a head and I realised I needed professional help. With the help of counselling, I’ve learned to change my attitude. If something goes wrong now in my day, I don’t worry about it. Before, I used to get very frustrated. Now, I realise that it’s better not to carry negativity in your body,” he explains.

Cotterell has also got involved with the Fighting Blindness charity which hosts a technology meet-up each week for the visually impaired. “I try to go to Dublin for this meeting but if I can’t, I’ll join on Facetime. I share what I know about technology for people who need to know about apps or software. There is a social aspect to it too,” he says.

When he’s out and about, Cotterell says that it’s nice when people offer help. “If it’s a road crossing I know, then I’m fine but otherwise, I’d say can I grab your elbow because that way, I can pick up better the direction they are going in,” he says.