Keep sleep simple or don’t sleep at all

I know I can’t sleep; I don’t need a wearable device to tell me that 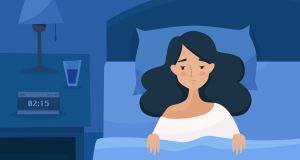 My FitBit can only estimate how much sleep I’m getting and it’s this estimate that is contributing greatly to my anxiety.

A survey last year conducted by Laya Healthcare suggested that 80 per cent of Irish people suffer from sleep deprivation. I count myself among that 80 per cent – I don’t remember the last time I woke up feeling refreshed.

Like many of us, I’ve been trying to fix this for a number of years. My latest attempt was to join the craze and buy a FitBit. What I’ve found is that tracking my sleep has made me more anxious, more stressed and more exhausted than ever.

Having generalised anxiety disorder means that disrupted sleep has been a part of my routine for as long as I can remember. My mum likes to tell stories of me sleep-walking down to the living room at night, a times tables book clutched in my hand, asking her to help me learn them. As I’ve gotten older, the disruption has become worse – nowadays, sleep walking, talking (and swearing) are all regular occurrences. It’s not unusual for me to wake up four or five times in one night.

I don’t always remember these incidents, but I cannot ignore the impact of them on me the next day. Waking up regularly throughout the night decreases the quality of my sleep overall, making me exhausted the next day. My concentration and attention span suffer so I find it hard to concentrate on a task in work without getting distracted by my phone. A lack of sleep also shortens my fuse, making me more likely to snap at someone.

Physically, I struggle too. Sleep is important for maintaining your immune system. Those of us regularly getting fewer than seven hours of sleep will suffer from more colds, flus and other illnesses, meaning we need more time off work. Once you’re trapped in that vicious cycle, it can be hard to get yourself out of it again.

In the past two years, I’ve tried a large range of products in an attempt to make falling asleep (and, more importantly, staying asleep) easier. I’ve sprayed lavender mist around my room while sipping a chamomile tea and listening to a bodyscan meditation. My antidepressants are supposed to make me sleep more easily yet I’ve noticed no difference since I started taking them over a year ago. I’ve downed more Rescue Remedy and magnesium supplements than you can shake a stick at and, yes, I’ve even tried exercise. Nothing has worked. In fact, my sleep is getting worse.

Like many of us, I’ve become trapped in a whirlpool of not sleeping, stressing about not sleeping and then not sleeping again. So in an attempt to alleviate the stress, I bought a FitBit.

One of the most appealing aspects of a FitBit aside from tracking steps and exercise is that it claims to be able to track your sleep schedule. Each morning you get a graph of your sleep from the night before with a breakdown of how much time you spent awake, in light sleep and in deep sleep. Mine measures this time based on heart rate and because it’s a wearable, many of us trust the statistics to be accurate. For the past six months, my FitBit has told me that I am not getting enough deep sleep and that I can spend anywhere from 1½ to two hours awake each night.

But the problem is that it cannot measure your brain wave activity which is the only way to measure your sleep cycle accurately. It can only estimate how much sleep I’m getting and it’s this estimate that is contributing greatly to my anxiety.

Given that my poor sleep is something I’ve carried from my childhood, it suggests that it’s something I will have to learn to live with. Yet it can be hard to find a sympathetic ear. Most people don’t want to hear about a 24-year-old woman with no kids who can’t sleep properly. The response is “Just wait until you have kids, and then you’ll know what real sleep deprivation is.” Poor sleep isn’t a competition.

We should all be aiming to get seven to nine hours of a sleep a night where we can. A good night’s sleep would do us all the world of good. But looking to a wearable to cure your exhaustion isn’t a good idea either. Sleep is a tricky thing and not something fixed by a little device telling you how tired you are. Stick to tips that actually work like not watching Netflix in bed and having a regular bedtime instead.