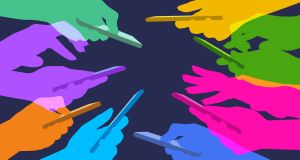 Irish people spend an average of 274 minutes on their smartphones each day. Illustration: iStock

Irish people use their phones for more than 4½ hours every day but spend a tiny fraction of the time making or receiving phone calls.

People spend just over 10 per cent of the time on their phones talking. Considerably more time is spent accessing social media and streaming music and video, according to new research published by the communications watchdog ComReg.

The report says accessing social media is by far the most popular thing people use their phones for, with an average of 64 minutes spent on various platforms over the course of a typical day.

The report, realised to coincide with ComReg’s national conference on the Digital Society, suggests that when the time spent on all activities is totted up, people spend an average of 274 minutes on their smartphones each day.

The research highlights the trend towards an increasingly digital Irish society with handset ownership almost universal across the country.

Smartphones are the handsets of choice, with 84 per cent of people now having such a device. The report shows that two-thirds of smartphone owners use Google’s Android operating system with most of the rest on Apple’s iOS.

Samsung Galaxy and Apple’s iPhone handset are the most popular among consumers.

The report highlights a digital divide between younger and older consumers with the percentage of people over the age of 65 who own a smartphone falling to 47 per cent.

Half of all phone users are bill-pay customers, with an average monthly spend of €42, including the cost of their handset. The figure is slightly up on the €40.28 that was spent each month two years ago.

By contrast pre-pay customers are spending an average of €21 per month.

The research points to loyal – or lazy – consumers, with 71 per cent of mobile phone customers saying they were with the same provider for more than three years and most people saying they chose their provider based on who their friends and family were with.

The next most popular reason given was the reputation of the provider followed by price.

“The survey results demonstrate how important mobile communications are to our daily lives, particularly for a digitally empowered society like Ireland, ” said the chairman of ComReg Garrett Blaney.

“Now more than ever, electronic communications technologies permit people to connect in ways that they have never done before. The digital era is constantly evolving and is already central to our economy and society,” he continued.

He said that while Irish consumers were enjoying the benefits of the digital era, “they also need protections from various forms of harm while online. However, this protection should not stifle innovation.”