‘I was going to die. Instead I lost a foot – and I mean literally a foot and a foot’ 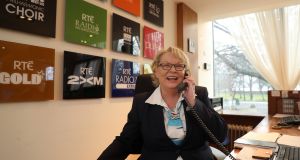 Julie Walsh is one of the faces that greets visitors to RTÉ Radio.

Originally the broadcaster’s sole female security guard – a smiling presence around the campus – Walsh’s change of role to receptionist was forced by a series of events in 2011, which led from back pain, to emergency lifesaving surgery, to the amputation of half her leg. “I was going to die. Instead I lost a foot – and I mean literally a foot and a foot.”

“Out of it” on medication, Walsh recalls a doctor telling her, if he didn’t take half her leg he wouldn’t be able to save the rest, and asking if she wanted the limb to bury, or should they dispose of it? “My family had asked that I wouldn’t be told until they were with me, but he did. They rang my sister to come in. I was that upset I was disturbing other patients.

“But I still didn’t really know what was going on. The day I was getting my leg off, my daughter and sister were very upset, but apparently I waved them goodbye as I was going off. It took nearly three weeks before it dawned on me and then I spent a day crying. I thought it was the end of the world. “

Despite massive doses of opioid analgesics, the pain was excruciating. “Your nerve endings are cut and they have to reconnect. I don’t think even those doing dressings realised how sore it was. Then I got another infection and had another operation and a vacuum machine put on. That was even worse.”

Another realisation came on the day that a patient and some visitors began to argue. Worried that a fight was going to break out: “I suddenly realised I couldn’t move or escape if I needed to. I felt totally helpless and afraid.”

Walsh spent 11 weeks at Dublin’s Mater hospital, and a further 11 at the Synge Unit, a post acute-care service, where she was gradually weaned off the strongest pain medication. “That was very tough.”

On discharge, she went to live with her sister and family. “I was in a wheelchair until I went into the National Rehabilitation Hospital (NRH). It was there that reality hit. I had been saying that everything was fine but it wasn’t. The psychologist was great, helping me come to terms with what had happened.”

First she had to build up her strength. “Apparently you need an extra 25 per cent upper body strength for a half prosthetic like mine – which is titanium and lightweight. It’s a lot more if you have a full prosthetic, or a heavier one.”

Learning to walk was a gradual process. “You have to rethink once instinctive movements. Even now I’m fine indoors but pavements are so uneven it’s hard to walk for any length of time. I can walk straight ahead, but I can’t weave in and out of people. If it’s busy I just stop and let people pass.”

She left the NRH after eight weeks. “Wonderful” staff ensured both she, and her apartment, were ready. “The carpet had to go. My daughter also moved home to live with me for two months.”

Even lifting a frying pan was difficult as Walsh learned how to adjust her balance. “At the start I wouldn’t have been able to carry a cup of tea safely. Now I wouldn’t think about carrying two cups. You always worry about falling, but you become more and more confident as time goes on.

“At first it’s about figuring out how to do everything safely. You also have to train your brain around new ways of doing things. When my daughter moved out I went to change the sheets. I was in the wheelchair, but my prosthetic toe went in under the bed and I couldn’t figure how to get it out again. My sister phoned and I was in stitches laughing saying, ‘I think I’ll just have to take the leg off’. And she said why don’t you stand up. And I did and the foot just flexed and came out. It’s things like that you have to get used to.”

Putting on the prosthetic takes about 15 minutes: “You have to make sure that everything is clean and dried, because you don’t want any moisture getting in. I grab the inner liner first, and then the prosthetic. I have a suction socket. The inner gel liner suspends me inside it so I’m not hitting off the bottom. There’s a little lip that goes under your knee cap, and then you’ve an outer liner to hold the prosthetic on – I hate the word stump. I call it my baby leg.

“You do get setbacks, but now I can cope. At the start I was frightened that I would lose the rest of my leg.” Those setbacks have included infections, a fractured knee, and having to stop wearing a more convenient prosthetic . “ It didn’t work because of the location of my incision. Then last year the muscles finally wasted away. The skin became floppy and I was getting blisters. They took ages to heal, and I was off for ages.”

However, she deems herself “lucky”. My right leg is prominent and I didn’t lose it. And I didn’t lose my whole leg. The first time I was in the NRH I saw this little girl running around with two prosthetics. Then she went over to her daddy and he took the legs off and tucked them in under his arms. When you see things like that it makes you realise how lucky you are. Mine is only a foot. And I’d lived over half my life when I lost it.

“It is life-changing, but in some ways I’m more independent. To live on my own again I had to learn to drive. I wanted to be able to live alone. I wanted to go back to work [she returned in 2013]. And I have.

“What would I tell someone else facing amputation? You will be very sore. It will be very hard. Your life will change. But, you will get through it.”