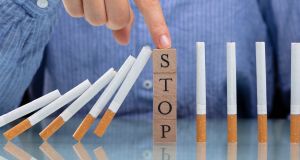 Changing daily routines can help people distract themselves from the habit of smoking.

First off, let’s admit that quitting smoking isn’t easy. Most people who have successfully quit will tell you that, and researchers have found that it takes five to six quit attempts to successfully give up smoking cigarettes. But, with the start of Lent tomorrow, deemed to be a significant date in the Christian calendar when people choose to give up smoking, it’s a perfect time for current smokers to take on the challenge of quitting.

“The best attempts to quit smoking are planned,” says Dr Séamus Linnane, respiratory consultant at the Beacon Hospital in Dublin. And while the overall health benefits of stopping smoking are indisputable - most people struggle to deal with the nicotine craving in the first while and the longer term habit of smoking at certain times that they have built up over the years.

Nicotine is a powerful drug which causes the release of dopamine in the brain which, in turn, induces a sense of general wellbeing, euphoria and relaxation. So, it’s not surprising it’s addictive. When you stop smoking, the cravings for nicotine induces both psychological and physical symptoms which include sweating, anxiety, irritability, change of mood and a general sense of unease.

These cravings will last for about 2-3 days while nicotine remains in the body.

But, the key thing to remember is that the cravings themselves only last for 5- 10 minutes and the challenge is to distract yourself during this time.

“Some people choose to distract themselves by taking deep breaths,” says Dr Linnane. “Some people walk up and down steps of the stairs. Others have a craving hit-list with three or four bright boppy songs on a play-list that give them strength to forget the cravings.”

Sipping a glass of cold water can also work for some quitters as it gives you a sensation similar to that missing feeling in the back of the throat.

Identifying your personal triggers for smoking is the other dimension that quitters need to consider. These can be anything from smoking when you have a cup of coffee or after your lunch or dinner to associating smoking with a short break from work or when chatting with a friend.

“If you’re strategic about identifying your personal triggers and make small changes to break the associations and reward yourself for doing so that will help. Being aware of your triggers is to be forewarned,” says Dr Linnane.

Changing daily routines can also help people distract themselves from the habit of smoking. So, for example, having a shower just after getting up in the morning instead of smoking a cigarette; sitting in a different place in the canteen, going for a walk or taking other exercise after lunch, having a warm drink before bedtime instead of a cigarette.

Some people are concerned that when they give up smoking, they will put on extra weight but Dr Linnane says that the average weight gain after quitting cigarettes is about four kilograms. “Smoking does suppress the appetite but it is a very maladaptive way to control weight and I like to reassure people by telling them that the average weight gain is 4 kg so that they can know in advance and put a limit on what they know is acceptable. But, if you increase your level of exercise when quitting, that will combat the weight gain,” says Dr Linnane.

The health benefits of quitting smoking are huge.
- Within 24 hours of quitting, you are inhaling an extra 10 per cent of oxygen into your lungs.
- Within 2-3 days, you have a better sense of taste and smell.
- Within six months, your lung function is 10 per cent better.
- Within a year, your risk of having a heart attack has halved.
- And, within five years, your risk of getting a stroke has decreased substantially.
- However, it takes up to 10 years before the risk of getting cancer is returned to the same levels of non-smokers.

The financial gains are significant too with many people realising they can afford new clothes or holidays from the money they’ve saved by not buying cigarettes.

“People’s motivation to give up smoking varies hugely,” says Dr Linnane. “Most people don’t feel good about themselves for smoking but it is enormously addictive. Many of the people I see are middle-aged and they started when they were 12 when the health messages against smoking weren’t as strong.”

He believes the public health messages about the dangers of smoking have improved hugely in Ireland. However, he says it’s still difficult. According to Dr Linnane, having support from a health professional doubles the chances of quitting as does using nicotine replacement therapy.

The HSE runs a very comprehensive quit plan (quit.ie with free phone 1800201203 Free text 50100 and live chat). With quit centres around Ireland, this offers daily email and text support, a personalised web page to track your progress and one-to-one support from a trained stop smoking advisor.

Tips to keep you on track

1 Keep a list of reasons why you decided to quit.
2 Make plans and stay busy.
3 Ask friends and family to help distract you from cravings and keep you motivated.
4 Delay acting on cravings for five minutes, distract yourself by doing something else and they will pass.