‘I was arrested for stealing thongs’: a first date conversation overheard 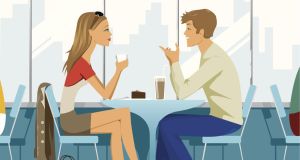 ‘So have you any secrets you want to share?’ Photograph: iStock

“All old people are weird.”

The sweeping statement wafts over my right shoulder from the table behind me and causes a ripple in the froth of my skinny cappuccino.

I’m sitting outside a cafe on the junction of Oliver Plunkett Street and Grand Parade in Cork city wrapped in a red padded coat and the warmth of a weak sun. There is something comfortable about “the real capital”, even if the staccato and sweeping statements of its snowflakes has been infected by mid-Atlantic drawls.

Turns out the pair behind me are on a first date, I assume of the Tinder variety, and while she was on the bus from the university to the city centre mere minutes earlier “this ould biddy in her 50s” – I have to restrain myself – moved seats after observing her arms.

“Must be tattoos,” I tell my coffee.

I don’t countenance a self-harming confession. Not over a first date, surely?

“It has been a crazy couple of weeks,” she confides.

“I was arrested twice. I told the cops that it was just CBD oil and not hash, but they wouldn’t believe me and now my mother is involved. They came to the house and she is furious with me.”

I can already tell he is nerdish, loves algorithms and wears glasses and a worried look. Ironically, it is harder to read her, even though she is doing all the talking. I’m imagining lots of kohl smokiness around her eyes and bright red lipstick. There is possibly a bejewelled nose-stud too.

If only I had eyes in the back of my head.

“Isn’t it great we have connected so well,” she is saying now. “You know I just don’t tell every guy I meet this kind of stuff.”

“Phew,” I mutter to myself.

“So why were you arrested the second time?” he asks rather tentatively.

“Well, when I am stressed, I tend to steal things. On this occasion it was from a certain chain store which unfortunately for me happens to have excellent security staff.”

“It was just a selection of thongs and a really good concealer I had read about in a review.”

“My skin breaks out badly when I’m stressed.”

Unsurprisingly, at this stage of the bizarre conversation my ears are like Dumbo’s. I’m beginning to wonder if I have inadvertently strayed on to the set of some student candid camera spoof.

I am tempted to tap this young guy on the shoulder and suggest he run for the hills, join a Tibetan monastery, but she is talking again.

“So have you any secrets you want to share?”

“Well, not of that calibre,” he says, coolly. “I think I told you in our texts that I play music?”

“Of course, I remember.”

“Cool. Let’s organise that I go to one of your gigs.”

“Look, while I’m in confessional mode I might as well tell you another secret.”

“Oh no!” I mutter. I want to tell her to stop, she’s said enough, that this emotional exorcism will not make her any less lonely or lost.

“I have an eating disorder. I binge on crisps and chocolate, or anything, cold pasta carbonara, leftover pad Thai with tofu, and then I puke it all up.”

My jaw is hovering on the pathway and all the leftover froth in my coffee cup has imploded.

So is this what certain experts mean when they argue that the snowflake generation is no more brittle than previous generations and has simply “destigmatised” mental health?

“They are much more likely to talk about anxieties and worries, which is generally a good thing,” says Prof Matthew Broome, director of the Mental Health Institute at the University of Birmingham.

Well, if that’s the case it is time for me to get out my dating app and tell some hot 60-year-old how I sometimes get up in the middle of the night in my thermal pyjamas and rollers, pour a large whiskey and watch three episodes of Mad Men while crying about my boobs not being as perky as sexy secretary Joan Holloway’s.

I know it is chicken-feed in comparison to being arrested for the possession of drugs but a girl’s got to start somewhere.

Read: Is she lonely or simply alone?

Expert tips: A dentist on toothcare
8