‘I only learned what consent was after I lost my virginity’ 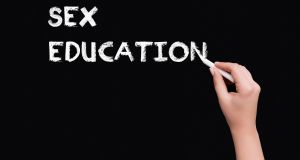 Ireland’s sex education has never been great. In primary school, I was taught about what adults do when they love each other and why you should always have sex with a condom.

I was also taught that you shouldn’t have sex until you’re ready. At 12 years old, that seemed a lifetime away.

My only memory of sex education in secondary school was our home economics teacher discussing the female anatomy and revealing that women have “three holes, not two”. I’ll never forget the look of sheer panic on my male classmate’s faces. In college, my education was based solely on experience, both my own and my friends.

Consent classes came too late for me and so like most other Irish millennials, I had to learn on the fly.

I only learned what consent was after I lost my virginity. I knew what rape and sexual assault were, but, at 16, I had no idea that someone pressuring you into having sex wasn’t normal. Afterwards, I felt strange. I’d expected to feel elated, like I was truly an adult, when in fact I knew that what had happened wasn’t great. We were both 16 and knew that this was what people in relationships were supposed to do. But pretending to be ready and actually being ready are two very different things.

With no education on consent, I wasn’t prepared for engaging in a sexual relationship. I was too scared of looking stupid or being accused of being a frigid that I let myself be pressured into something I didn’t want to do. In 2019, that’s called coercion but in 2010 coercion, like consent, were words that I didn’t know the meaning of.

Being in two long-term relationships and living at home shielded me from online dating apps and one-night stands. I began hearing more about consent and what it meant. I realised it was more than just a simple “yes” or “no”. The “yes” should be enthusiastic rather than flat. The person should be able to consent and you should never take silence as a “yes”. But I also began to see a backlash to it. I watched as people online debate whether or not they needed consent classes, because, “well, I wouldn’t rape someone”.

Congratulations. Do you want a pat on the back?

Consent, like everything, has nuance. People can violate it without sexually assaulting you. You can be in the middle of having sex with someone and suddenly they place their hands around your neck and start choking you. They haven’t asked you if you’d like to be choked, they just assume it’s something you’re into.

Guilting someone into having sex with you is another violation. Saying things like, “but we haven’t had sex in ages” or “but you promised me we would” or “are you sure it’s your antidepressants? It seems like you’re making it up” is guilting. In fact, all of the above have been said to me at one time or another and have made me so guilty that in the end, I’ve chosen to have sex even though I knew I wouldn’t enjoy it.

With good sex education around consent, I might have realised that someone guilting me into having sex wasn’t good. I might have been able to verbalise what I felt about the entire situation and communicate properly.

Could, would and should are some of the worst words in the English language but in this case, they’ve allowed me to learn from my experience.

As Irish people, we need to get over our awkwardness around sex. There is a simple mantra that I live by: communication is key. It affects all aspects of my life, but something that is particularly important around sex and consent. Whether it’s your first time or your 50th, you should be communicating what’s good and what’s bad. It makes it more fun for everyone involved which can only be a good thing.

The second thing is to know your own boundaries. People are into a wide spectrum of things from missionary to S&M and there should be no shame around that. But if you’re not into these sorts of things, then your boundaries should be respected.

It’s okay to be vanilla. It’s many people’s favourite flavour of ice-cream.

We must teach people, especially children and teenagers that what they see on the screen, is not what it might be in real life. Women aren’t shaved to within an inch of their lives, the screaming isn’t actually representative of actual sex, (especially when you live with your parents) and not all women enjoy having a penis pushed into their mouth.

Without this frank and open discussion on sex and consent, we’re setting up another generation for disaster.

Recently, I returned to my old school to talk about consent and the transition year students weren’t shocked when I revealed that women had “three holes, not two”.