Given the vital importance of human donor milk for premature babies, is it not now time we had our own milk bank in the Republic - even without all the Brexit uncertainty? Video: John Cassidy 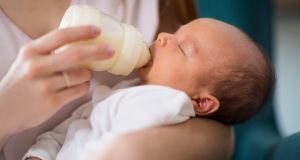 Donor breast milk is crucially important for mothers who cannot produce enough milk for their newly-born infants, and can be a life-saving elixir in the case of premature babies. Photograph: iStock

Irish maternity hospitals receive donor breast milk via a volunteer group known as Blood Bikes – motorcyclists who give their free time to deliver essential supplies to hospitals throughout the country. In the case of human donor milk, this currently comes mainly from a milk bank in Co Fermanagh, but also from a source in Chester, England.

Donor breast milk is crucially important for mothers who cannot produce enough milk for their newborn infants, and can be life-saving in the case of premature babies. Evidence suggests that the use of human breast milk reduces the incidence of necrotising enterocolitis, a potentially fatal bowel infection.

With no breast milk donor bank in the Republic, how can supply be guaranteed, given the uncertanties surrounding Brexit?

Jennifer Whitmore, Social Democrats’ spokeswoman for children, first became aware of the donor milk issue after she was approached by a constituent, given that Irish hospitals receive their donor milk from facilities outside the State. Having raised the subject with the HSE, it became apparent to Ms Whitmore that “the issue of donor milk and the milk bank supply wasn’t really being considered as part of the whole Brexit issue”.

A HSE reply to a parliamentary question by Róisín Shortall last month stated that “the HSE is committed to the supply of donor breast milk to sick or preterm babies when on occasion their mothers are unable to produce sufficient breast milk for their needs. There is currently an arrangement in place to purchase donor breast milk from a number of sites in the UK which meets the required need”, and that “to date, the only Brexit-related issue identified is the requirement for GDPR compliance in respect of personal data shared with NI-based parties”.

The letter concluded by confirming that there were currently no plans “to establish and operate a human milk bank in the Republic of Ireland, however, we are committed to maintaining necessary supply”.

Ms Whitmore says the issue is not solely a Brexit one, however, and cites difficulty with supply in the past when the Northern Ireland facility encountered an issue which necessitated its temporary closure. The supply problem was circumvented by Blood Bikes, who sourced an alternative stream from the north of England. Ms Whitmore stresses the importance of having a facility here, in the Republic, to guarantee future supply.

Michael Noonan, who got involved with Blood Bikes about 12 years ago, elaborates: “Some time back, the milk bank [in Fermanagh] ran into some trouble and had to close, which meant there was no facility to provide a service to Ireland, which created huge issues. We managed, in conjunction with our colleagues in the UK to set up a supply from a milk bank in Chester. The issue around donor breast milk is that it is critical for the kids. They cannot operate without it.”

Dr Anne Doolan, consultant neonatologist at the Coombe Women’s and Children’s University Hospital, says that every year in Ireland there are “just over 600 babies who are born less than 1,500 grams (3.3lb)” and that about 120 of those premature births are cared for by the Coombe. In addition, there would be a number of babies with cardiac or bowel problems requiring surgery who would also be dependent on donor milk.

While mother’s own milk is most desirable in such cases, there are many instances when she may simply be unable to provide enough of her own milk – such as illness, infection, having twins, or the sheer stress of premature birth which exacts its own toll on the body and its ability to produce.

One of the greatest benefits of feeding premature infants with human breast milk though, is its role in preventing necrotising enterocolitis. Prof Afif EL-Khuffash, consultant neonatologist at the Rotunda, says that this potentially devastating illness “affects up to 15 per cent of babies of less than 28-29 weeks’ gestation”.

Such babies have improved outcomes when fed human milk as opposed to formula, something corroborated by the Coombe’s Dr Doolan: “For these babies, we never give them formula, because we know that formula very much increases their risk of developing necrotising enterocolitis.”

Dr Tanya Cassidy, assistant professor at Dublin City University of nursing, had her own tragic experience in 2005 while living in Canada. She gave birth to a boy, Liam, at 30 weeks’ gestation, but could not produce enough of her own milk to sustain the baby. As the nearest human milk bank at that time was over 2,000km away, Liam was put on formula.

Her baby died of necrotising enterocolitis at 16 days, after doctors had carried out  exploratory surgery before concluding that “there was not enough bowel to be compatible with life”. This was a crushing blow for Dr Cassidy and her partner, Conrad Brunstrom, and the start of a painful grieving process.

As an academic, however, she started looking into the disease of necrotising enterocolitis when she could “think again”, and recognised “improved outcomes” in the survival of prematures being fed human milk stretching back more than 100 years.

Gabriel was born in 2006 at the Coombe, also at 30 weeks’ gestation – his mother having been admitted four weeks earlier due to having placenta previa, which causes blood loss.

Gabriel is now a healthy 13-year-old and Dr Cassidy’s journey of research into donor human milk led to this year’s publication of Banking on Milk: An Ethnography of Donor Human Milk Relations (Routledge). The book represents the dissemination of Dr Cassidy’s research into human milk and the importance of the donor variety for mothers in need of support.

During Dr Cassidy’s research, the UK referendum to leave the European Union occurred, along with the problems in donor milk supply mentioned earlier which “led to some real concerns about only having one such service on the island of Ireland”. As a result, “several clinicians have called for the service in the Republic” and Dr Cassidy herself “has connected such a service to research”, a link she says clinicians are also keen to develop. Dr Cassidy believes that any such service should work with the existing service in the North.

Dr Doolan of the Coombe says it is extremely important to have a milk bank in the Republic of Ireland for many reasons. “Obviously, if you only have one way of supplying donor milk to your babies you are vulnerable in that way because you certainly need to ensure that there are two different suppliers or two different ways of getting milk to your babies.” It is too important for babies who are reliant on donor milk, and they cannot suddenly “not get it”.

So is setting up a milk bank in the Republic here such a huge undertaking?

“There first of all needs to be a group of interested people involved,” says Dr Doolan, as well as an initial financial outlay. “Of course there are regulations around the preparation of milk as well, in order to supply donor milk you need to be able to pasteurise and ensure there is no infective risk. So it’s not an easy thing to set up, but with the right group of people and the right will it is very doable.”