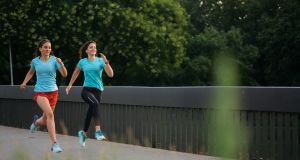 Most of the 84 participants increased their endurance during their three months of jogging and biking, but not all. Photogrpah: iStock

If you start exercising and do not seem to be gaining as much endurance or strength as you had hoped, you might want to switch up your routine, according to a fascinating new study of exercise responders and nonresponders.

The idea that people’s physiques react differently to the same exercise might seem implausible, at first. Most of us probably expect that when we begin a new walking, jogging or weight-training regimen with friends or other training partners, we all will progress about equally and gain comparable physical benefits.

But recent research indicates that our physical responses can be idiosyncratic. After a few months of running, one person may gain considerable aerobic fitness, while another’s endurance hardly budges. Ditto for weight training, in which some people build far more strength than others, even if they lift the same amount of weight.

Few studies, though, have delved into whether people’s responses are monolithic – meaning someone who barely responds to one kind of exercise will gain little from other types of exertion – or supple, so that swapping routines should raise response.

The effect of genetics likewise has been uncertain. In some past studies, exercise response has seemed to run in families, with parents and siblings sharing similar physiological exercise gains or droughts, a potentially disheartening finding for anyone whose familial history suggests low response. But those studies tended not to be experimental; they asked about people’s exercise histories but did not ask people actually to exercise while tracking whether and how their familial genetics affected responses.

So, for the new study, which was published recently in The Journal of Physiology, researchers at the University of Western Australia in Perth and the University of Melbourne decided to study both the variability and genetics of exercise response by asking pairs of twins to work out together.

Twins can be uniquely useful to science (full disclosure: I am a twin), because identical pairs share 100 per cent of their DNA, while fraternal twins share about 50 per cent, like any siblings. If twins try something new and the identical pairs react almost identically and the fraternal ones do not, then the intervention has a strong genetic component. If, on the other hand, everyone’s reactions are mixed, with some twins, both identical and not, responding more or less than others, then genetics is less foundational to these responses than lifestyle factors such as people’s diets, education, weight, mental states and so on.

Now, the researchers recruited 42 sets of young, healthy and sedentary twins in Perth, 30 of the pairs identical and 12 fraternal. (Several of the pairs believed they were fraternal, but genetic testing at the start of the study revealed they, in fact, were identical, to everyone’s surprise.) Some participants were male, some female. The scientists measured the twins’ current endurance and leg strength and then directed them to start exercising.

Each of the sets of twins worked out together for two three-month periods. During one, they ran or cycled for an hour three times a week. During the other, they lifted weights three times a week, also for about an hour. At the end of each three-month session, the twins returned to the lab, and the researchers rechecked their aerobic capacities and muscle power. Then they compared how various twins’ legs and lungs had changed during these exertions.

The results were telling. Most of the 84 participants increased their endurance during their three months of jogging and biking, but not all. So, too, leg strength rose in most of the twins after three months at the gym but stayed relatively puny in a few.

Almost no one, however, responded poorly to both the endurance and strength training. In other words, those volunteers who gained little fitness bang from running substantially pumped up their strength after lifting, and vice versa.

“There were very few recalcitrant nonresponders,” said Daniel Green, a professor of exercise science at the University of Western Australia, who conducted the new study with his doctoral students Channa Marsh and Hannah Thomas and others. “Almost all of those who failed to respond to one form of training were capable of gaining benefit by switching to the other.”

Interestingly, the benefits gained could be broad. In some cases, nonresponders to aerobic exercise added endurance when they turned to weight training, even though lifting mostly targets muscles.

At the same time, there was little evidence that genes shaped people’s outcomes, because the twins’ responses varied wildly, even among identical pairs.

The upshot of this data is that we should not be discouraged if prolonged running or lifting does not produce the results we hope for. We might, in that case, want to noodle about with different approaches. “There is an optimal exercise strategy for everyone,” Green said, “but it differs between people” and will not be determined or limited only by your DNA.

Of course, this study was short term and limited to two types of exercise. It did not vary the workouts’ intensity or duration. And it cannot tell us what factors most influence our responses, if genetics do not. Is it diet, mindset, age or something else?

Green and his associates hope to look into some of those issues in future twin studies. But for now, he said, we know that “not everyone reacts to exercise in the same way. But there is something out there that will benefit almost everyone.” – New York Times