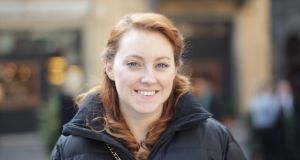 Clare Cullen: “I put it on Instagram and so many of my actual friends in real life said they’d been through it too.”

“I almost forgot to add a trigger warning here: this video is going to discuss loss, particularly in relation to loss of a pregnancy”, says Clare Cullen on Clisare, her YouTube channel with more than 110,000 subscribers. “So if that’s not something you feel you can watch right now, that’s totally fine, I’ll see you at a later date.”

Having been on YouTube for the last 10 years, it was instinctive for Cullen to tell the story publicly even though her content is usually travel and comedy related.

“A popular British YouTube couple, Rose and Rosie, had had a miscarriage about a month to six weeks before me, which I found very helpful and [Irish YouTuber living in the UK] Anna Saccone Joly had a video about her miscarriage a few years back too. Watching other people’s videos made me feel less alone I guess, I didn’t realise how common it was. It never occurred to me that it would happen on a first pregnancy. I don’t know why.”

That’s kinda the way I deal with stuff, I love dark humour. Once I can start to make dark humour jokes about something, it means I’m in a better place

However, expressing an opinion on the internet can be fraught, especially for women, so the decision wasn’t one made lightly.

“On the other side, I was worried that trolls would attack me because I’ve publicly advocated for repealing the Eighth [Amendment] and am publicly pro-choice. If anyone follows me they’d know I was publicly pro-choice. Yeah, I was genuinely concerned that people would troll me, telling me I deserved it or whatever.” (One commenter expressed their apologies but then added that she “may look back on some of [her] repeal the eighth videos with a different mind set . . . you’ll have a different perspective on other futures robbed”, to which Cullen replied: “No. I won’t.”)

Cullen knew what to expect from the different platforms she’d post on. “There’d be more considered comments on YouTube, but also I’d be more likely to get trolls because of videos I’d done in the past talking about issues like Trump or abortion, people who’d come in and leave nasty comments.

“The funny thing was, I put it on YouTube and I got lots of support, messages and comments from other people who’d experienced it, male and female, but who were strangers. Then I put it on Instagram and so many of my actual friends in real life said they’d been through it too, and I didn’t know that. Loads in real life said they’d had the same experience, which was really comforting in one way, I think I’m in the majority, and not alone. I really couldn’t believe the amount of people I know who I didn’t know [had had a miscarrige] you know?”

“After I’d come to terms with it, a little bit later than when I’d uploaded it to YouTube, I made dark humour videos on TikTok.”

The videos included things such as Cullen lip-synching to a Family Guy reference where an expecting couple tell Peter Griffin that they don’t want to know “whether its a boy or a girl”, to which he responds: “Well, it’s . . . not breathing.”

“That’s kinda the way I deal with stuff, I love dark humour. Once I can start to make dark humour jokes about something, it means I’m in a better place. What I didn’t expect was when you make a joke about something traumatic/dark that happened to you, other people – mainly with blank profiles to be honest – feel it’s okay to make jokes about what happened to you. I had to take a break because of the comments that people made.”

Some comments ranged from “we have to laugh, same happened here” to “How dare you joke about this? This isn’t funny. This is disgusting.”

Some laughed with Cullen, offering their sympathy and well-wishes, others provided well-intentioned but unsolicited advice – “I don’t want strangers giving me advice on sex, thanks”.

And ultimately those who joined Cullen in joking about her miscarriage, with one such commenter saying that: “Men just have no filter around each other, some of us have around women, I don’t. If you start on dark humour, we are just going to out darken it” as though the subject was a tug of war between who could be funnier rather than a way of processing trauma.

“Look,” Cullen says, “I’ve gotten comments that have made me uncomfortable before, specifically comments that were a bit personal and related to sex, those made me super uncomfortable, I’d regularly get inappropriate comments and people have made jokes about me in the past, they washed over me, you grow a thick skin. But the jokes made about my miscarriage . . . that stung me a bit more.”

She references the Saccone Joly video – which has more than 2 million views – noting that the comments are turned off.

“It’s a very personal thing as a woman, I do feel like it’s harder for men to understand what the experience is like. I’m perfectly in the right to make jokes about it, but I don’t think people with anonymous profiles can make a joke about what happened to me.”

“I feel like when women complain about harassment they get online, it’s suggested that they take their pain and harassment offline. Why don’t other people learn what is and isn’t appropriate? Why don’t internet commenters have some sort of accountability? YouTube made moves to stamp out anonymity as much as they could in the comment section, but for TikTok you can just make an account but essentially have an anonymous profile, which isn’t helpful.”

As one of her commenters said: You can only make gallows humour if you’re on the gallows.

The experience, while uncomfortable and at times painful, was worthwhile for Cullen, and she now joins the likes of Rose and Rosie, and Anna Saccone Joly as a helpful resource for those who may go through the experience or already have.

“I know it’s not for everyone, not everyone will want to share that publicly, but it’s helped me, aside from the weird stuff, it’s been positive and helpful and lovely, glad I did it, everything taken into account, and all things considered.”