How is Dry January going? Here are five tips to help you along

A private no-booze mantra can be helpful: ‘If it’s no good without alcohol, then it’s no good’ 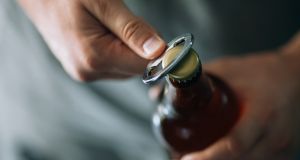 It takes time to retain the brain - especially if it’s used to ‘wine o’clock’ at home. Photograph: iStock

How is Dry January going? At this point being off the drink may have started to pinch.

When you look at the whole month, maybe you start to wonder how you are going to get through 31 days of this?

And because most people now do most of their drinking at home, the home itself triggers a reminder – in the form of a surge of dopamine – that it’s, say, “wine o’clock”.

The first tactic to work on is substitution. What are you going to do instead of drinking?

It’s easy to forget to ask yourself this question when you’re excited (in advance) at the benefits of dropping the drink for a month or even more.

But sitting there watching Matt Hancock on Sky, bleating on about Coronavirus, would drive Father Theobald Mathew back to the bottle so just for now I would find something else to do. Find an alternative such as reading a book, watching the entire Netflix back catalogue, playing Grand Theft Auto V or cross stitching.

At first it can seem an unsatisfactory pursuit compared to boozing but if you stick to it, the interest will start to take hold.

I used to have a private mantra which helped a lot: “If it’s no good without alcohol, then it’s no good.”

I mentioned earlier that the home becomes a cue, a trigger, for wanting a drink. This is an inconvenient aspect of the brain’s learning system and it can take a long time for it to quieten down.

One way to start to retrain the brain is to designate one space or room as a place where you will not drink again, even when your Dry January month is up. For instance, some people pour a glass of wine (one of those big glasses, the kind you have to lift with both hands) into them when they are making the dinner. For that reason, then, the kitchen can be a good place to start. Though it may take time, gradually the brain learns not to trigger a “Drink! Drink! Drink!” reaction when you enter the kitchen in the evening.

If you are going to be meeting people where boozing is going on (as I write this I have no idea when, whether or how you will be able to do this) have an explanation in your head in advance, something simple: “I’m doing the Dry January thing, I’ll get you later.” Whatever you do don’t get up on your high horse: “My body is a temple and I will no longer contaminate it with alcohol.” The higher the horse the harder the fall.

If you fall, though, don’t give yourself such a miserable time about it that that you “need” another drink to comfort yourself. Remember that the habits of years or decades are hard to break and get yourself back on the wagon as soon as you can. Also, people who are compassionate towards themselves tend to have more success at meeting such challenges.

Belle Robertson’s blog tiredofthinkingaboutdrinking.com is a good and humorous resource for people trying to ditch the booze. I also found Jason Vale’s book Kick the Drink. . . Easily! to be very helpful even if it’s not as easy as he makes it out to be.

1. Work out what you are going to do instead of drinking.

3. Establish a no-alcohol (for you) space in your home.

3. Know what you are going to say to people when they ask you to have a drink.

And if you’ve already broken your resolution? Start again for 31 days – doesn’t have to be January.

You’ll feel a certain satisfaction if you know you’ve stayed the course. Even if you only make it part of the way to the end, though, know that you’ve done something which a lot of people haven’t – because they didn’t try.