How do I stop my boy putting his hands down his pants?

Ask the Expert: He doesn’t even notice he’s doing it but even his teacher has commented 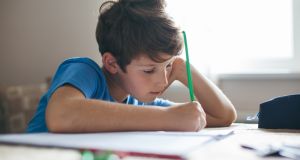 Question: My seven-year-old son has got into the habit of putting his hands down his pants and leaving them there. He tends to do it while watching TV and it seems purely a comfort thing. I tell him to stop and he takes his hands away but then a few minutes later he puts them back.

Now his teacher and childminder have mentioned it to me and it seems he is doing it at school and in the minder’s home. This seems a bit worrying that he is doing it when he is outside the home and in public. It made me wonder if something bad had happened to him, though I don’t think so.

I was also quite embarrassed when both the teacher and childminder had noticed. I have discussed it with him and told him he shouldn’t do it, especially in school or outside. He says he didn’t even notice he was doing it.

Are there any things I can do to help him stop and to break this habit?

Answer: Lots of children and adults develop sensory habits which they use as a means to comfort or distract themselves. These can be relatively innocuous and barely noticeable habits such as folding your arms, squeezing your knuckles or even twirling your hair. They can also be habits that stand out more such as rubbing your face, scratching your neck, or flapping your arms. And they can be also habits that are socially unacceptable such as picking your nose or biting your nails.

All sensory habits serve similar functions for young children, such as a means to relax

Touching your genitals in public is the most unacceptable of these habits, yet it is also the one that is hardwired as the most pleasurable. For young children touching genitals is a sensory rather than an overtly sexual act. You raise the question as to whether it might indicate something “bad” and I assume you mean sexual abuse. As a good protective parent, you should consider this, but on its own a habit of putting his hands down his pants is unlikely to indicate abuse – unless there are other indicators and you have other specific reasons to be concerned.

All sensory habits serve similar functions for young children, such as a means to relax or change how they are feeling or to simply distract themselves – sometimes they are habits that become associated with other behaviour such as watching TV or they are used as rituals, for example, before going to sleep.

They are frequently subconscious and children are often unaware they are doing them.

Most children learn to modify their sensory habits in public as they grow up. They usually replace the unusual and socially unacceptable ones with less noticeable and more acceptable ones. However, for many children the habits are strong and they are hard to change.

It strikes me that you are already doing a lot right in how you are managing the situation. You have a good understanding of how the habit has developed as a comfort, and you are able to talk to him about it in a way that he opens up to you (eg, telling you he is unaware of when he is doing it).

Many parents resort to giving out to children or shaming them when they do socially unacceptable behaviours – however, this is counterproductive, and can damage your child’s self-esteem. To help him change the habit, the first step is to have a chat with him explaining how touching his genitals is private and not something to be done in public and definitely not in school etc. During this conversation it is worth teaching safety by reminding him that other people should not touch his genitals and giving the message that he should tell you if anything like that ever happened. The conversation gives him space to tell you if there are other worries or issues.

The second step is to bring the habit into his awareness so he can notice when and where it happens. This means you draw his attention to when it is happening so he can stop. So you don’t end up haranguing or embarrassing him, often it is best to agree a code word or a signal as a reminder to stop. Such signals can include saying the word “hands” or tapping your fingers.

The third step is to help him develop an alternative, more socially acceptable habit when he feels the need to comfort himself. This can include sitting on his hands or folding his arms or changing his seating position. It is best to be upbeat and light-hearted as you explore options. You can have a bit of fun identifying and role-playing possible new habits.

Talking to the teacher and childminder

Though it is an embarrassing habit it is important to talk to his teacher and childminder about the plan, especially as they have raised it with you. Listen to see if they have any other issues or concerns and then explain that you are treating it as a comfort habit that you are helping him change – if appropriate you can explain to them the code word you are using as the reminder to stop and what alternative habits he is developing.