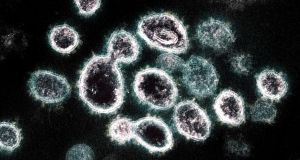 An alarming new study may explain why immunity after coronavirus infection might be fleeting. Photograph: NIAID via The New York Times

At the beginning of the pandemic, coronavirus looked to be another respiratory illness. But the virus has turned out to affect not just the lungs, but the kidneys, the heart and the circulatory system – even, somehow, our senses of smell and taste.

Now researchers have discovered yet another unpleasant surprise. In many patients hospitalised with coronavirus disease, the immune system is threatened by a depletion of certain essential cells, suggesting eerie parallels with HIV.

The findings suggest that a popular treatment to tamp down the immune system in severely ill patients may help a few, but could harm many others. The research offers clues about why very few children get sick when they are infected, and hints that a cocktail of drugs may be needed to bring coronavirus under control, as is the case with HIV.

Growing research points to “very complex immunological signatures of the virus,” said Dr John Wherry, an immunologist at the University of Pennsylvania whose lab is taking a detailed look at the immune systems of Covid-19 patients.

In May, Wherry and his colleagues posted online a paper showing a range of immune system defects in severely ill patients, including a loss of virus-fighting T cells in parts of the body.

In a separate study, the investigators identified three patterns of immune defects, and concluded that T cells and B cells, which help orchestrate the immune response, were inactive in roughly 30 per cent of the 71 COVID-19 patients they examined. None of the papers have yet been published or peer reviewed.

Researchers in China have reported a similar depletion of T cells in critically ill patients, Wherry noted. But the emerging data could be difficult to interpret, he said – “like a Rorschach test.”

Research with severely ill COVID-19 patients is fraught with difficulties, noted Dr Carl June, an immunologist at the University of Pennsylvania who was not involved with the work. “It is hard to separate the effects of simply being critically ill and in an ICU, which can cause havoc on your immune system,” he said. “What is missing is a control population infected with another severe virus, like influenza.”

One of the more detailed studies, published as a preprint and under review at Nature Medicine, was conducted by Dr Adrian Hayday, an immunologist at King’s College London. He and his colleagues compared 63 Covid-19 patients at St Thomas’ Hospital in London to 55 healthy people, some of whom had recovered from coronavirus infections.

Hayday and his colleagues began with the assumption that the patients would generate a profound immune response to coronavirus. That is why most people recover from infections with few, if any, symptoms. But those who get very sick from the virus could have immune systems that become impaired because they overreact, as happens in sepsis patients. Alternately, the scientists hypothesised, these patients could have immune systems that struggle mightily, but fail to respond adequately to the virus.

One of the most striking aberrations in Covid-19 patients, the investigators found, was a marked increase in levels of a molecule called IP10, which sends T cells to areas of the body where they are needed. Ordinarily, IP10 levels are only briefly elevated while T cells are dispatched. But in Covid-19 patients – as was the case in patients with severe acute respiratory syndrome (Sars) and Middle East respiratory syndrome (Mers), also caused by coronaviruses – IP10 levels go up and stay up.

That may create chaotic signalling in the body: “It’s like Usain Bolt hearing the starting gun and starting to run,” Hayday said, referring to the Olympic sprinter. “Then someone keeps firing the starting gun over and over. What would he do? He’d stop, confused and disoriented.”

The result is that the body may be signalling T cells almost at random, confusing the immune response. Some T cells are prepared to destroy the viruses but seem undermined, behaving aberrantly. Many T cells apparently die, and so the body’s reserves are depleted – particularly in those over age 40, in whom the thymus gland, the organ that generates new T cells, has become less efficient.

The research also suggests that a popular idea for treatment may not help most people. Some patients are severely affected by coronavirus infections because their immune systems respond too vigorously to the virus. The result, a so-called cytokine storm, also has been seen in cancer patients treated with drugs that supercharge T cells to attack tumours.

These overreactions can be quelled with medications that block a molecule called IL-6, another organiser of immune cells. But these drugs have not been markedly effective in most Covid-19 patients, and for good reason, Hayday said.

“There clearly are some patients where IL-6 is elevated, and so suppressing it may help,” he explained. But “the core goal should be to restore and resurrect the immune system, not suppress it.” – New York Times