Stem cell therapy: why we need to be suspicious about cure-all claims

Stem cells have long been considered a great hope of medicine, but unscrupulous clinics are marketing all sorts of treatments 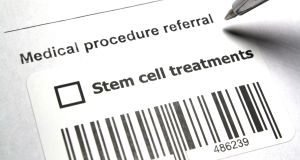 If you were to read many of the adverts for stem cell therapy that you can find online, you would be forgiven for believing that stem cell therapy is nothing short of a panacea. It is, according to those ads, able to improve all sorts of conditions, from knee pain and osteoarthritis, hair loss to heart disease, diabetes and even autism.

There’s just one problem – there’s little science behind many of the claims.

Stem cells are only approved for use in treating certain cancers and blood disorders, yet a search for the term on Facebook or Google will return details of a large number of clinics offering treatments for many other conditions.

The harsh reality is that while there is a lot of promising research being undertaken in this area, nobody should be parting with large sums of money for what may be currently no more than snake oil treatments, according to Noel Caplice, who is professor of cardiovascular sciences in the department of medicine at University College Cork and a consultant cardiologist.

Caplice, who has more than 20 years’ experience monitoring stem cell research as part of his studies into heart disease, told The Irish Times that we should all be suspicious about the range of different ailments clinics are willing to treat with stem cells.

“There should be red lights flashing and alarm bells ringing. No therapy treats everything from Parkinson’s disease to multiple sclerosis to heart disease to knee pain – that’s idiotic. Medicine just doesn’t work like that.

“True stem cell therapy is extremely complex because you have to refine the type of cell you’re going to give to the organ it will be used in, and there are different challenges in different organs. Legitimate scientists are working on these things, but they are not there yet. It’s an incredibly difficult area of research.”

Stem cells have long been considered a great hope of medicine. They are the body’s building blocks, the cells from which other types of cells develop. Under the right conditions they can be encouraged to become any other type of cell found in the body, such as blood cells, brain cells, heart muscle cells and so on.

At its simplest, stem cell therapy involves cultivating stem cells in the lab, guiding them to grow into specific types of other cells, and then injecting those healthy cells into diseased parts of the body where in certain circumstances they have been shown to help the body’s own cells to fight disease.

This effect was first shown around 30 years ago in experiments on mice. However, things have not been all plain sailing since then.

“The initial promise of stem cells has not been fulfilled, and what’s happened in the meantime is that commercial clinics offering treatments have gotten ahead of the science,” said Caplice.

“The first trials in mice showed incredible regeneration, but their progress turned out not to be so straightforward. When the initial trials were replicated, the researchers couldn’t reproduce the same early data.”

While research is ongoing and there have been a few significant breakthroughs using stem cells, notably in the case of combined stem cell and gene therapy for thalassemia and leukaemia, that has not stopped unscrupulous clinics from marketing all sorts of treatments under the banner of stem cell therapy.

“In the private world anything goes. There are people spinning this therapy for multiple sclerosis, Parkinson’s, solid organ deterioration – a whole range of problems. Ten years ago there was even a boat operating off the west Cork coast that was treating people for multiple sclerosis using stem cells. This has been going on for decades in this parallel world, and it’s mostly driven by money,” Caplice said.

According to Frank Barry, professor of cellular therapy at the regenerative medicine institute with NUI Galway, a negative side effect of the off-label use of stem cells is that it makes it harder for researchers to raise money for research.

“It damages our reputation to have people doing this. We all get painted with the same brush, and it makes it much harder to raise money. When these maverick clinics are exposed for their bad practices, there is a blow-back effect on us even though we’re completely unconnected,” he said.

“The sad thing is that there are genuinely quite exciting applications of stem cell therapy that will be possible in the future. All of these are undergoing scientifically-designed clinical trials that are carefully done, carefully managed, are placebo-controlled, double blind – the works. Some of these trials are going quite well and suggest that the outcome will be good.”

The biopharmaceutical company Takeda Ireland, for example, is currently developing a treatment for inflammatory bowel disease using the results of a trial that was conducted into stem cells.

“That’s a dreadful condition that blights people’s lives. This is a new treatment so that’s very exciting. That project achieved market authorisation because of careful work done over many years in high quality clinical trials,” said Barry.

“My own work is in the treatment of arthritis with stem cell therapy, and that’s also going well. We’re in the middle of a big trial that’s been running in a number of clinical sites around Europe, and we think that when it’s finished it’ll be positive.”

Running trials like these takes a lot of time and a lot of money. In the meantime bad actors are stepping into the gap that exists between promising early results and actual rigorous and robust science.

“The harsh reality is that you can’t recommend that a patient has stem cell therapy for anything that isn’t directly authorised. If someone does that now they’re getting it off-label, so to speak, and basically they’re taking their chances,” said Barry.

“I can understand why someone might want to do that, but it’s not authorised. I would hold out a great deal of hope that when all the work is done there will be strong proof supporting this kind of treatment. But at the moment you can spend a huge amount of money essentially for nothing because there isn’t the evidence to support treatment.”