Getting the flu jab may not just save Christmas, it may also save lives 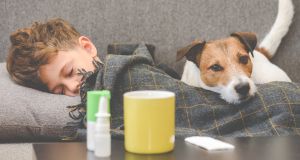 Flu outbreaks occur almost every year during the cold season

Influenza, or to use its more common appellation “the flu”, has been with us for a long time. One of the earliest reports of a flu-like illness comes from circa 410 BC via the ancient physician Hippocrates’ Book of Epidemics, where he describes a highly contagious infection of the upper respiratory tract traced to northern Greece.

The word “influenza”, however, wasn’t used to describe a disease until more than a thousand years later. In 1357, people described an epidemic in Florence as “influenza di freddo”, which translates to “cold influence”; low temperature was suspected to be the cause of the disease. The unusually severe “Spanish flu” pandemic of 1918-1920 may have killed as many as 100 million people, or 3-5 per cent of the world’s population.

It wasn’t until 1933, when a team in Mill Hill, north of London led by Patrick Laidlaw, finally found a virus that causes flu symptoms, that work could begin on developing a vaccine. The flu is caused by a highly infectious, rapidly spreading RNA virus. There are three types: A, B, and C. Types A and B cause most flu illness. It is one of many viruses that cause upper respiratory infections.

The flu takes hold fast. A fever, headache, all-over body aches, chills, and sapping fatigue will confine you to bed

Outbreaks occur almost every year during the cold seasons in both northern and southern hemispheres, with the extent and severity varying widely. This year, the four dominant strains of flu virus are “Brisbane”, “Kansas”, “Colorado”, and “Phuket”, named after the locations where they were first recorded.

The flu takes hold fast. A fever, headache, all-over body aches, chills, and sapping fatigue will confine you to bed. A painful dry cough is common. You may have a sore throat and a blocked nose, but these symptoms do not always occur.

Thankfully, for the majority of people, the symptoms, horrible as they are, are self-limiting. Most will feel better after a few days or a week. The deconditioning of being bed-bound can go on for several weeks.

However, the flu can be dangerous – even life-threatening – in older people, newborns, those with an acute illness, and those with a chronic health condition such as cancer. According to the HSE, between 200 and 500 Irish people die from the virus every winter.

The most effective way of protecting yourself and others from getting the virus and developing the flu is to get vaccinated. The flu vaccine helps your immune system produce preventative neutralising antibodies to fight the virus. If you have been vaccinated and you come into contact with the virus, the antibodies will attack it, greatly reducing your chances of getting sick.

Mythbusting
The flu virus mutates or changes steadily. This means that it changes its outer coat into a new look each season, like changing the get-away cars into a truck in the Italian Job. These changes make it harder for your body’s immune system to detect and contain it, just like the Italian police who failed to catch Michael Caine. For the flu vaccine to work, it has to change too, so you need to make sure you have a vaccination that’s up to date for each new season.

There’s a pervasive myth that the flu vaccine will give you the flu-it won’t. The small bits of influenza proteins in the vaccines are not active. Some people will feel the effects of their body developing an immune response (for example, a sore warm swollen arm, elevated temperature or a scratchy throat), but this does not mean that they have the flu.

Many people will catch one of the other seasonal upper respiratory virus in the early winter soon after influenza vaccination, concurrent or sequential to, but not caused by the vaccination – in the same way that the All-Ireland football final each September obviously does not cause Halloween, even though one consistently follows the other every year.

Another misconception is that only those in at-risk groups need to be vaccinated. Again, this isn’t true. Healthy people may transmit their influenza to at-risk vulnerable friends and relatives. Herd immunity occurs when a significant portion of the population become immune to an infectious disease, thereby decreasing the chance of it spreading. For that reason, in the US, the Federal Government are now recommending vaccinations to everyone over the age of 6 months.

Some people think that they are “too healthy” to receive the vaccine. While you may be in good health now, this won’t necessarily prevent you from contracting the virus. The best and most reliable benefit you can give your immune system’s flu response is a vaccination.

By avoiding the flu vaccination, you are not just making yourself more vulnerable to infection, but others too, like an elderly parent or grandparent.

Invest in your health and the health of your community
The HSE offers flu vaccinations to anyone over the age of 65 and those identified to be in an at-risk group, but it is readily available to everyone over the age of 10 years from their local pharmacist, GP, or occupational health department.

While a vaccine will not guarantee your protection from the flu, it will ensure that even if you do get it, your symptoms will be shorter and less severe. In most cases, however, the vaccine will keep you and at-risk groups from harm’s way, leaving you free to enjoy the autumn and winter period.